The 2017 World Rally Championship is set to get underway in Monte Carlo on January 19. Martin Holmes previews one of the most eagerly anticipated championships in recent history.

By far the most dramatic change in the FIA World Rally Championship in 2017 is the new regulation for World Rally Cars, which creates a sort of elite upper class car limited to use by drivers entered by registered championship teams.

Under the new rules, existing 2016 specification World Rally Cars can continue to be used in the WRC by private teams and, in a policy U–turn, the FIA have offered a new Trophy for privateer drivers using these older cars.

The 2017 cars provide new spectacular aerodynamical developments, a science never explored at this level of rallying for the past 30 years.  Coupled with this, bodywork can be widened, together with the suspension tracks.

Other changes under the 2017 WRCar rules allows a return to central transmission differentials, reviving technology that had not been permitted since 2010.  New, hopefully more effective, safety features are also required for the crews of 2017 specification cars.

The four registered world championship teams have produced cars complying with the new rules, while provisions have been made so that approved privateers can also use these cars, but only if their activities are endorsed by the manufacturer team officially entering their cars.

All the teams have been entering the new era of the sport, cautiously aware that the rigours of rallying will demand extensive design compromises in aero work, especially on gravel stages, with the challenge being heightened by the lateness with which detailed technical regulations were finalised.

One major disappointment followed the sudden withdrawal from the WRC of the VW team, and that their elaborately developed 2017 design, the fifth model 2017 car to be designed, is unlikely to be seen on a WRC event.

Notwithstanding the withdrawal of the reigning manufacturer champion Volkswagen, the world championship has expanded for 2017 from three to four full registered teams. 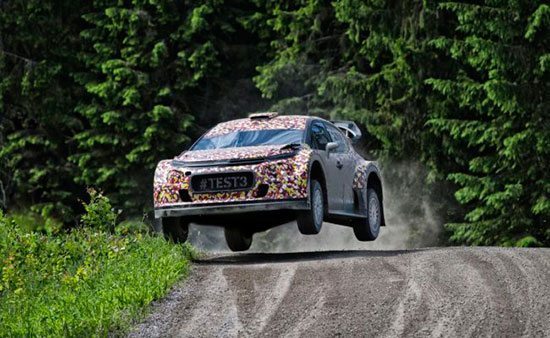 Thousands of kilometres of testing will make Citroen one of the teams to catch.Citroen Racing returns as an official team after a year’s absence while the corporate group restructured itself following its commercial divorce from the DS operation, and also while they developed their 2017 specification car.

Their line up is unchanged with Kris Meeke, Craig Breen and Stephane Lefebvre.

M-Sport took on Sebastien Ogier in addition to their already crowded line-up of Ott Tanak, Elfyn Evans, Eric Camilli and Mads Ostberg, and Hyundai continued as before with Thierry Neuville, Dani Sordo and Hayden Paddon.

Back to the sport for the first time since 1999 comes Toyota, who took on Volkswagen refugee Jari-Matti Latvala alongside Juho Hanninen and Esapekka Lappi.

The main regulation change affecting teams for 2017 is that teams are allowed to nominate three, instead of two, crews to be eligible to score points in the official Manufacturers’ championship, which had been the rule since 2004.

The FIA, however, cancelled the alternative WRC Team option, in which teams could register one or two other crews as additional entries in the Manufacturers’ championship.  This option had been offered since 2006, but in reality it was intended to conceal what had been a sad lack of actual manufacturers contesting the championship.

The FIA also abandoned the rule, which had been awkward for teams to implement, that one specific driver should always be their principal driver.

Volkswagen’s withdrawal caused a lot of disruption to innocent teams who found themselves obliged to consider inviting the now-available top flight drivers, and how to appease their own drivers who found their expectations dashed.

Ogier and Latvala found new homes, while Volkswagen’s associated company, Skoda, offered Andreas Mikkelsen a car in which to start the season

The world championship in 2017 will comprise 13 events, for the eighth successive year, fewer than the championship Promoters want, but at a comfortable maximum limit for teams. 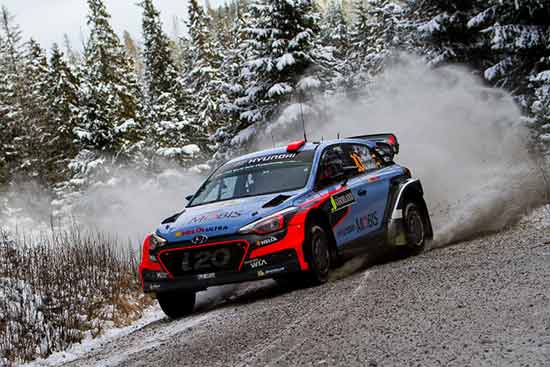 The Swedish Rally service park will be based in Torsby this year.The WRC Promoters had worked hard to bring China back into the series for the first time since 1999, but at an embarrassingly late stage the 2016 event was cancelled and hopes to make this a 14th event in 2017 were abandoned.

The Promoters, meantime, tried to convince that there were many other countries eager to step into the championship, but with the exception of Turkey, a lot of the rumours were not well founded.

The main change in the calendar comes from the decision to move Corsica from the end of the year up to early April, a period in which the event has not been run before.  After a stressful experience with the route for their 2015 event, the Tour de Corse has built on the more suitable route used in 2016.

A change announced by another round was that the Swedish Rally will move its up-country service park westwards from Hagfors to Torsby, even further away from the rally headquarters town further south at Karlstad.

A change that still waits to be confirmed in detail comes to Rally Deutschland, where the service park will leave the rally headquarters town of Trier and goes eastwards to the inland holiday resort of Bostalsee. 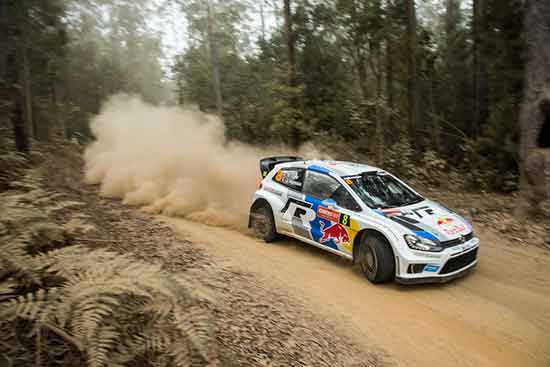 Instead of retaining the same basic order from Day 1 (based on championship standings before start of the event), now the Priority 1 drivers will start Day 2 in reverse classification order.  This change was not universally approved.

Whatever Ogier might say, the existing rules provided for significant and very attractive promotion of the sport, when six different drivers won individual rounds of the series in 2016, while the undeniably best driver convincingly won the series before the end of the season.

With the 2016 champion manufacturer, Volkswagen, no longer an active competitor in the series, the FIA decided that the car carrying the number one on events in 2017 would be the Ford of Ogier, with the other Fords to be eligible for Manufacturer points carrying numbers 2 and 3. 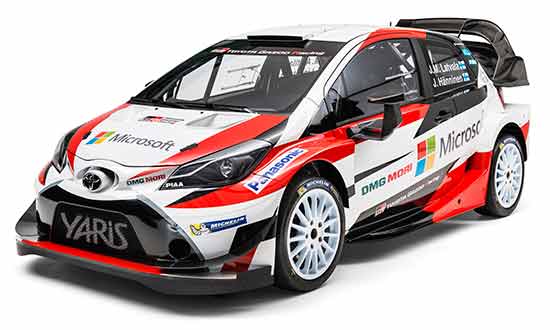 Toyota has certainly not approached their return to the WRC the easy way!  There was wide surprise in the sport when Toyota Motorsport GmbH (TMG) in Germany embarked on a testing programme for a 2017 project before large elements of the 2017 regulations had been settled.

It extended to doubts if this was an official project, or simply an unofficial activity.  Anyway, a dramatic decision was taken to remove most of the project from TMG and entrust this to Tommi Makinen Racing (TMR) in central Finland.  He was offered a clean white sheet of paper on which his team could design their car, with only engine work retained by TMG.

First problem therefore was to assemble a team and entice them to establish themselves in central Finland.

Finland is hugely respected as a breeding ground for rally drivers and for holding famously exciting rallies. There was, however, no indigenous specialist competition car industry on which the team would need to rely, though four-times world champion driver Makinen already had experience assembling competition Group N Subaru cars.

For every team, the design work for 2017 World Rally Cars was urgent, for TMR even more urgent was assembling the team in the first place.  Gradually it was clear that expectation of WRC success had to be made realistic, and the team admitted that some success in 2018 was the best that could be hoped for. 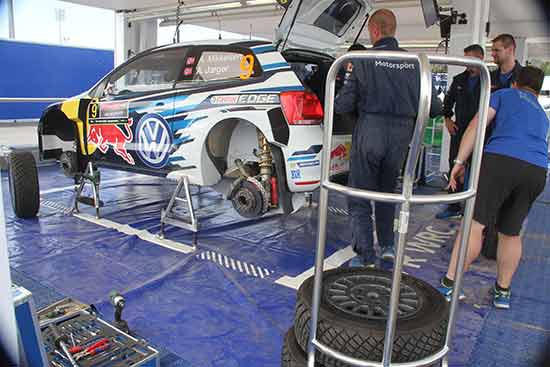 VW's withdrawal has had a big impact, especially for Andreas Mikkelsen.Famous high-profile exits from world championship motorsport have been frequent occurrences, but that doesn’t lessen the shock when it happens.

News about the consequential effect of the VW corporate crisis emerged in September 2015.  Immediately it wasn’t only the financial effect which led to worries about the company’s continued high-level activity in motorsport, there was also the need for a dramatic and public adjustment of corporate policy.

Audi’s endurance racing programme was to be the first casualty, then news broke in early November 2016 that the rally programme would stop forthwith.  While VW staff was told their employment was safe, the team’s contracted drivers found themselves with the prospect of their personal career paths being broken.

Then came the next part of the earthquake.  The company’s 2017 WRC project would stop and the prototypes committed to life in museums.  The company offered to lease out their already constructed cars to privateers, but at world championship level.

There were too many obstacles for that, beyond the obvious problem of needing time to make plans.  In any case, the 2017 car could not be homologated by the FIA unless the manufacturer had been registered in the championship, a thing that the company expressly forbade.