Former rally ace Inkster and co-driver Spencer Winn (Ecolight Mitsubishi Evo 8) have been regular front-runners in Targa tarmac events since Inkster's full-time switch from gravel five years ago and the duo looked like main event winners two years ago before a big crash on the second to last day.

Tony Quinn in his new Lamborghini at Targa NZ.Since then Inkster has upgraded to a later model Mitsubishi Evo and upgraded the car with bigger wheels, brakes and a sequential 6-speed gearbox.

He says today's two prologue stages - the first a 16km dash along Christchurch's Summit Rd, and the second a 4-lap dash round the Ruapuna motor racing circuit at Mike Pero Motorsport Park, were perfect for settling in and getting any bugs - not to mention butterflies - out of the system.

This year Inkster and Winn are part of a four-strong group of top locally-based drivers expected to give returning five-time event winner, Queensland-based Scot Tony Quinn and co-driver Naomi Tillett in Quinn's all new Lamborghini Huracan a run for their money.

Having beaten Quinn and Tillett to stage but not overall event wins in the past Inkster knows that to finish first, first you have to finish, and though confident he is realistic enough to know that there is a long way - still just over 2,500km - to go before the finish line in Queenstown in five days' time.

"I'm definitely feeling comfortable about what's ahead but a lot can happen in five days, particularly now we are down here in the South Island on roads that are going to be  new for everyone."

Like Inkster and Winn, he and Tillett spent the day settling in, in their case to Quinn's brand new Lamborghini, the pair giving the all-new Italian supercar its world competition debut in the event.

"As a first-off effort straight off the showroom floor it was very good too, very good, "said the man as well known to Kiwis as the owner of the Highlands Motorsport Park in Cromwell as he is for his exploits in Targa events here and in Australia. 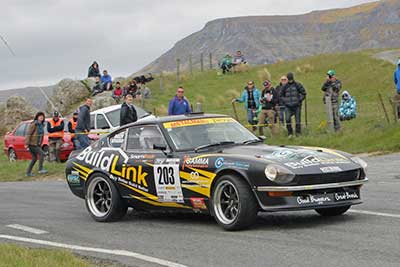 Andy Mygind's Datsun 260Z at the Targa NZ prologue.Quinn often attributes his success in long-distance road events like this year's Targa South Island, to watching and listening to former event winner, expatriate Kiwi Jim Richards, who believed in playing a long game, and he said today that there were 'at least four or five other guys' who he expected to match his pace in the new Lamborghini, particularly early on in the event.

"But," he said,"as long as we are within 30 seconds of the leader each day then we can have a crack on the last day if we need to."

With the two prologue stages now complete, the first timed stages of the 20th anniversary Targa South Island start in Timaru tomorrow (Tuesday) and continue through South Canterbury and North Otago before the first of two overnight stops in Dunedin.

After a day full of stages in the North Otago hinterland (and lunch and service stop in Oamaru's historical precinct) on Wednesday the field returns to Dunedin before heading south on Thursday to Invercargill - and a day's end stage at Teretonga Park.

Competitors then spend the final day (Saturday November 01) in the Lakes County with stages to and from Glenorchy and across the Crown Range before the official finish in downtown Queenstown and the prize giving function the next day.

All told, just on 200 entrants will contest 807kms over 34 closed special stages linked by 1828km of open road transport stages.