Incredibly, it’s 40 years ago this month, so I do not remember everything about the first world championship rally in South America held in Argentina in 1980. I do remember that it was a momentous event, however, * * * * * * There was for example a distinctly memorable occasion when we were standing beside a special stage. The memory became progressively more vague. It coincided with the time we were entertained by local enthusiasts who wanted us to share their portions of beef and red wine! At that time the rally was for us, as much as the drivers, a voyage into the unknown. What I could never have envisaged, however, was just how the rally would develop in importance, improve in excellence of organisation and take its regular place beside the great rallies in the championship. In the 40 years from 1980 till 2020 a lot has happened in the sport in South America! The first Codasur Rally, in 1979 had been run in the typical South American city-to-city system, outside the world series but which had been an adventure, but strong in advertising potential for any successful crews. The most daunting impression about the 2nd Rally Codasur Ultra Movil YPF in 1980 was the ruggedness of the land where it was held. Tucuman was a classic South American location close to the mountains in the north of the country. It was in the sugar producing area and was the historic centre where the antiSpanish revolution first gained its foothold. The rally was a joint effort, bearing the name of the consortium of South American governing federations, and providing for alternative starting points in Paraguay, Brazil and Uruguay. It wasn't many years before the rally was held proudly in the name of the country where the real competition was located, Argentina. 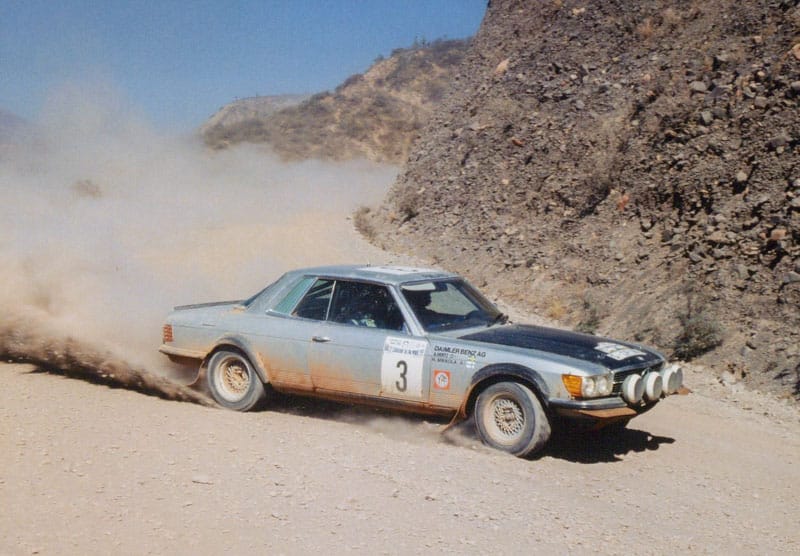 Organisational standards were not up to today's levels even though they were normal by contemporary standards. Stage roads were not necessarily closed to other traffic, and the traditional precision of organisation elsewhere in the world was honoured in a different way. Promises, for example, were fulfilled with a frustrating sense of vagueness. With the rally based at Tucuman yet with the start down at Buenos Aires, 920km away, we needed things to be waiting and ready for us in Tucuman when we arrived by the midnight flight. When there was no promised car in which to travel to the stages, the tension began to mount, especially when we realised it was now Sunday and the rental offices were closed. It seemed easier for the Argentines to rent a European rally car to enter the event, than for European journalists to rent a road car to follow it. Eventually we were allowed to share a car with a local enthusiast. It was a Ford Falcon, which we sensed had been borrowed without the owners' consent, judging by the need to return the car spotlessly clean at night. 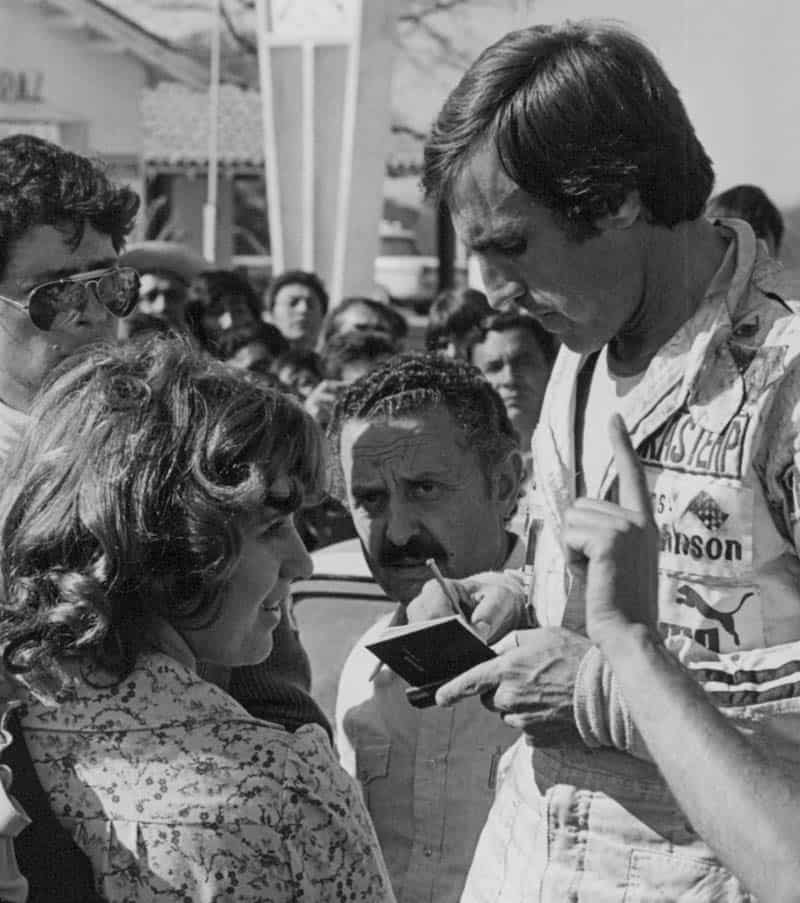 They were not called stages but 'primes', a name given by the British organisers of recent marathon events in their continent. The length of the stages created an intriguing decision by the teams to set up mid-stage service points. The average speed on the stages, when the roads were not held in the mountainous regions, were also impressive. The distances (total stage length of 1177km with 14 stages in total) created doubt as to whether the high performance European cars would last the distance. Fiat had felt confident about tyre wear on the long stages, but all the cars finished the longest stage with bald treads. "In three years I have never had a puncture. Unfortunately," added Rohrl, "they did not accept my request for a hard compound. They insisted it was safe to fit a softer compound and I had a puncture at the end of the stage. Happily, I hardly lost any time." The event proved much tougher than expected. On their fifth year in top level competition the Fiat Abarth 131s were usually very reliable, but their fuel consumption was a concern so the team fitted bigger fuel tanks for the occasion. Peugeot came with African specification 504 Coupe V6 cars, which should have lasted the distance, but only one of which did. Datsun, in slow but reliable 160J cars, were in the middle of an impressive run of wins in Kenya, seemed assured of reliability, but only one finished. Mercedes had been gradually injecting a sporting factor into their rally cars, even re-homologating their SLC sports cars into the Touring (Group 2) category as part of the new, more sporty, image. 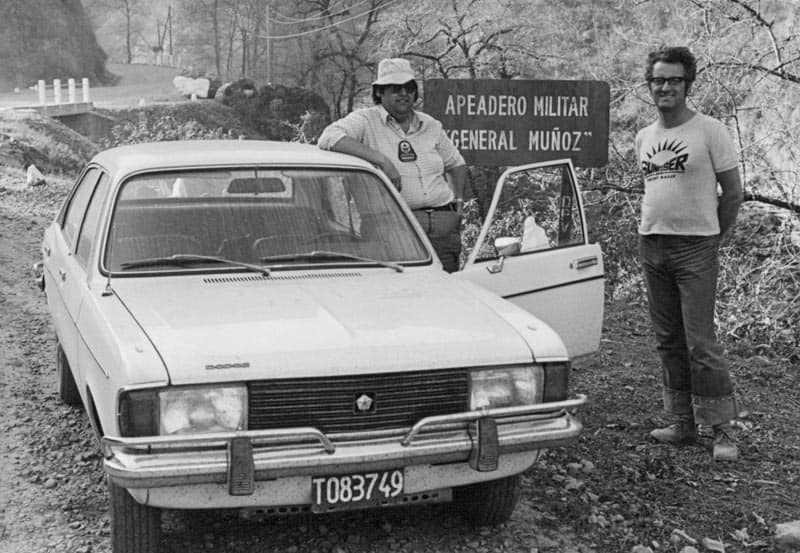 When we finally rented a car! Martin Holmes and fellow photographer Hugh Bishop.

This was to be no walkover for the visiting cars. Fiat lost two of their four cars after wrecking their sumps on the same series of bumps. Mercedes experienced a series of driveshaft and engine failures which nearly put them all out. For this event they changed from the usual Dunlop tyres to the more competitive Pirellis, which had also been expected to tolerate the torque of the 5-litre engines for longer. To be even safer, Mercedes also softened up their suspensions, but stripped tyre treads were still frequent. The feeling that motor sport was an officially approved activity pervaded much of what we witnessed. The army controlled the spectators, firing guns into the air to exert their authority and keep the people away from the cars. Well wishers were everywhere. Poor local people mobbed Reutemann like he was a god. At every service park he off-loaded bags full of fruit given by doting ladies en route. All the time we were there we sensed the importance of the occasion, the continuation of hallowed traditions, of being in a place where famous names were present. The rally was six days long. One day for the concentration run, two orthodox days of stages, one day of rest, then two more normal days to the finish. On the official day of rest, the local Mercedes dealer welcomed us for a typical Argentine lunch, presided over by five times world Formula 1 champion, Juan Manuel Fangio, who personally welcomed all the foreign visitors. 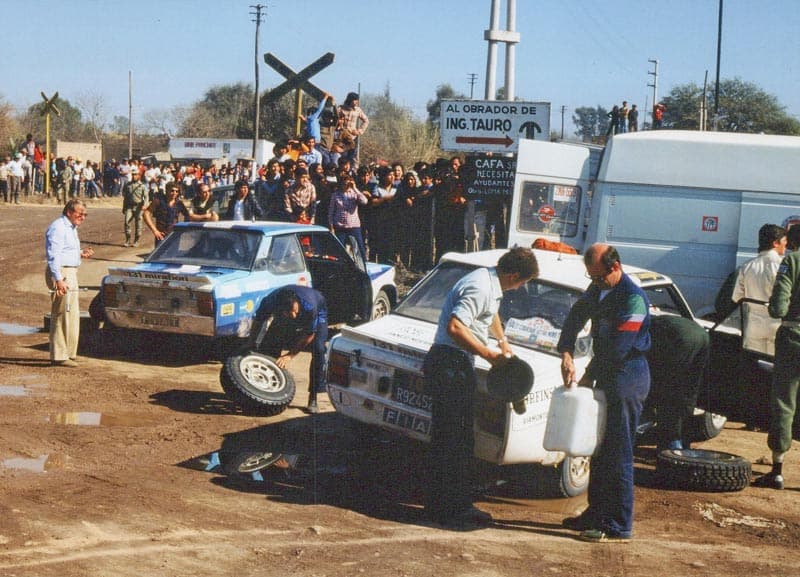 Jorge Recalde was rallying a works Mercedes, quite an honour, as his name had been recommended to Mercedes by Fangio himself. The only visitors who knew the place before the rally had been the handful who had contested the marathon rallies in the past. Andrew Cowan, former President of Ralliart Europe, felt a strange nostalgic sense when the rally paused at Salta. That was where he was hospitalised on the 1970 World Cup London-Mexico rally after an accident. Tucuman continued the accelerating pace for the future of world championship sport. Europe, Africa, North America and Australasia were already hosts to the series, it was not until Indonesia arrived in 1996 that the one remaining inhabited continent entered the series and the word 'world finally became meaningful in the sport. High performance rallying gradually spread to other areas in South America. The first time state-of-the-art rally cars had appeared in South America was in fact, on the Brazil Rally in 1979: an invitation event organised by ex-patriate Portuguese people, which was won by Markku Alen in a Fiat. The International Brazil Rally was vying with the Rally Argentina for official approval for world championship status, obtained for the 1981 and 1982 season. The organisers then fell out of favour with the national federation and the event did not continue. Since 1980 the tradition of South American rallying has progressed. Places, teams and dramas have all played their part in the legend creating. The tradition of city-to-city motor sport linger on, principally in Peru with the classic Road to the Incas race, and in Paraguay with the Trans Chaco Rally. 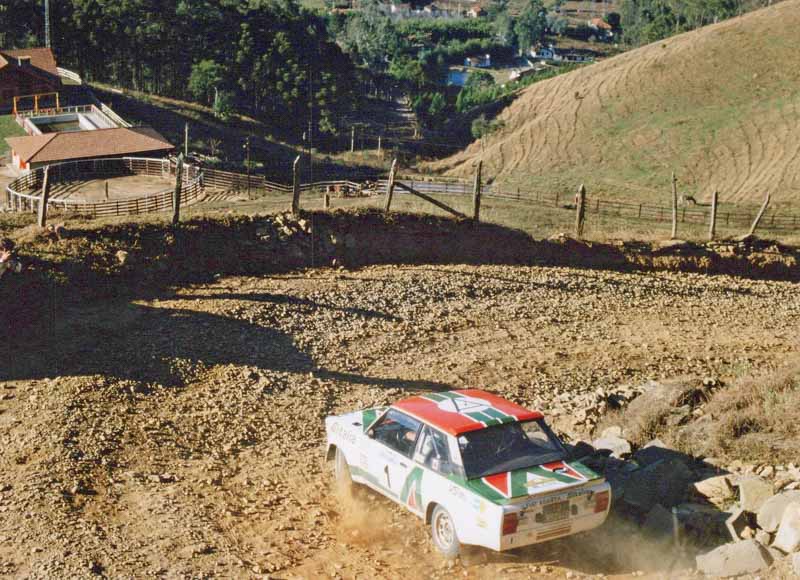 The Codasur championship has opened doors in many countries, bringing the benefit of the experience of European-style sport to South America. These events are aimed at providing a championship mentality, offering events which relate to each other, encouraging competitors to enter a wider variety of locations. Of the people who nave epitomised South American rallying, few can have had such an impact as Ari Vatanen. His first appearance in the Continent was the Argentina Rally in 1981. Things did not go well for him. It was at a critical time in his eventually successful quest to become the first and only privateer World Rally Champion. He crashed his car and this required his team to fly a replacement car out from Britain for the event in Brazil which followed two weeks later. The two events were run together to save the expense of unnecessary travel! Then came the traumatic Rally Argentina in 1986, when Vatanen crashed heavily and put himself out of championship rallying for nearly two years. That day will long be remembered by those who were there. There hung over the event that pall which comes when you sense someone has died. Medically he had, but experts in Rio Cuarto hospital effected a resuscitation and happily Ari is among us still. Rally Argentina has held world championship status every year since 1980 except for 1982 when the rally was cancelled because of the South Atlantic crisis. Tucuman hosted the event again in 1981, but then internal politics demanded another town, chosen to be Bariloche, should host the rally. 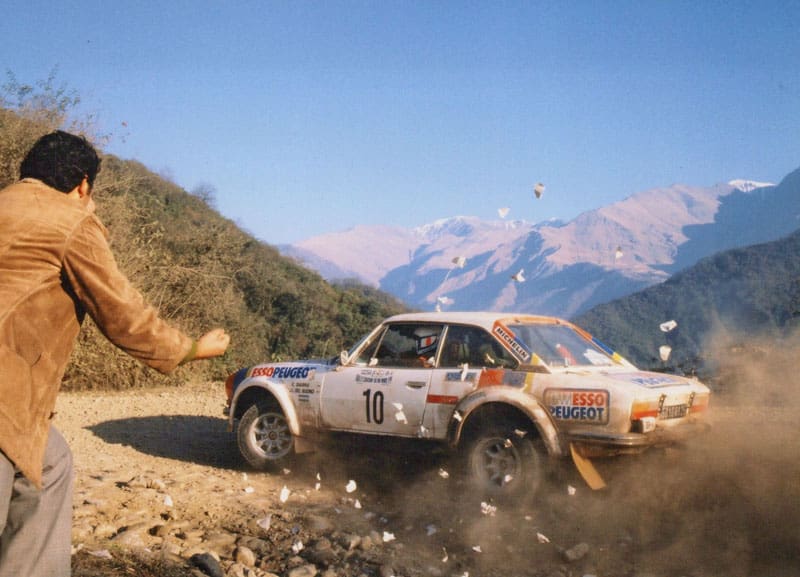 For 1984 the championship first visited Cordoba. The stages have been run there every year since then, expect for 1992 when it returned to Tucuman. By now Tucuman was quite another place, the airport was no longer in the middle of the town and the planes now had much quieter engines, there was a substantial bypass around the town, but the surrounding region was just as barren as ever. It was no longer acceptable as a venue for an event of the importance of the championship. It was far too far from civilisation. When the injured Spanish driver Fernando Capdevilla needed Presidential help to get an ambulance to take him to hospital, it was clear the days of Tucuman as a major rally centre were numbered. The start and one super special were held in Tucuman in 1993, and since then the rally has never left Cordoba. What are left in Tucuman, however, are the enthusiasts who first came to know rally sport through the Codasur Rally. Roberto Sanchez has been active in world championship rallying in Europe and when it was announced that the Governor of Cordoba would sponsor a world championship rally team for two drivers from his region in 2000, the Governor of Tucuman immediately announced he would support Sanchez. The spirit of Tucuman lives on, even if the World Rally Championship doesn't go there any more. 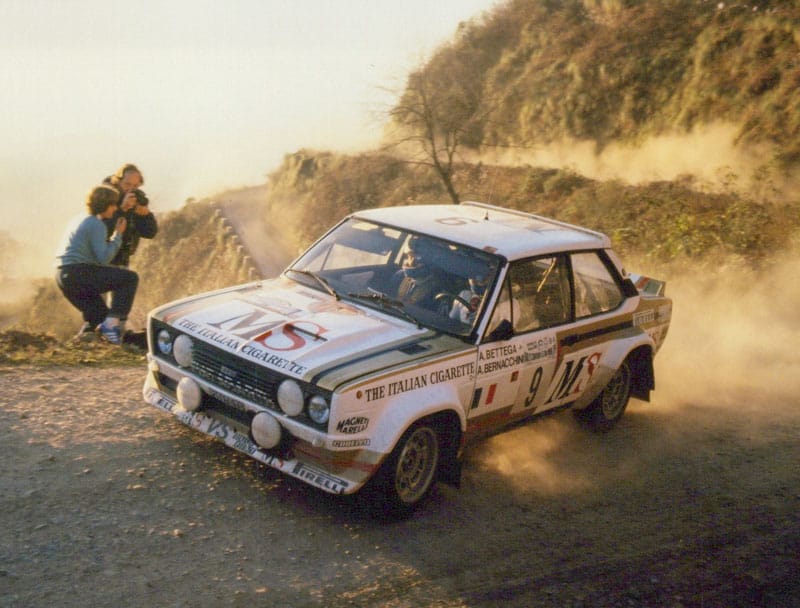 Attilio Bettega tackles one of the countless mountain roads in his Fiat Abarth 131. Photo: Martin Holmes

Titanic struggle in Rally of Turkey