Rally Recall: Thanks for the memory – 2002 Safari Rally, Kenya

The Safari Rally returns to the WRC in 2021, but it won’t offer 935km of special stages like the rally did in 2002. Back then, the rally attracted all six WRC works teams. Ford’s young star, Markko Martin, was contesting the event for the first and explained to Martin Holmes the difficulties of the rally, and how hard it was to adjust to such a specialised rally. * * * * * 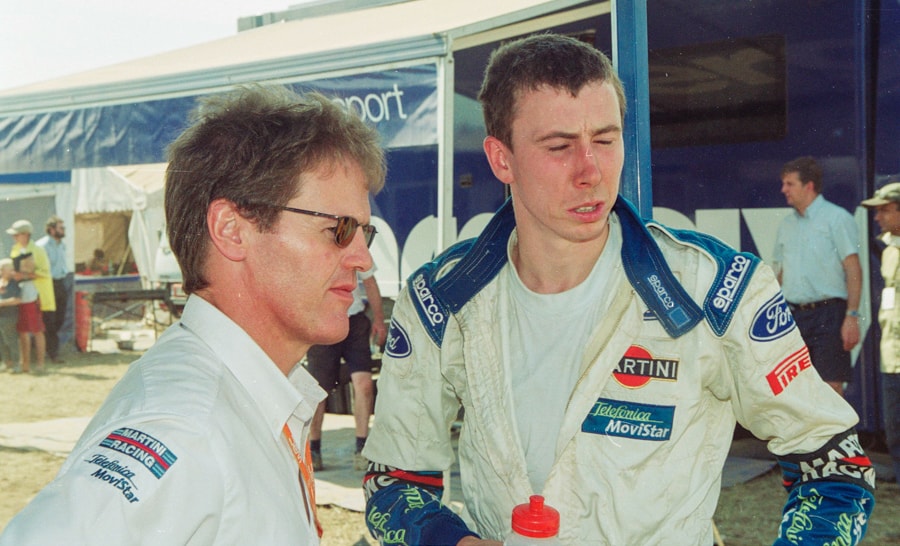 No one ever seems to be neutral about Kenya or the Safari Rally, either you love them or you don’t. One of the difficulties about the event when it was a WRC round previously was that for most of its life the only available date it could be held was during the long annual Easter holiday, when commercial traffic was off the Kenyan roads and voluntary helpers were plentiful. But this movable religious holiday (between March and April) played games with the weather, so a July date was instead allocated, starting in 2001. Just how tough a Safari was depended a lot on the weather both before and during events, and the weather was always a topic of debate. 2002 was the 50th Anniversary occasion that the Safari Rally was run, and it had been in the world championship since the series inauguration in 1973.  In 2002, it was organised in just 10 weeks, following a shortfall in budget, and was rescued when the satellite communications company, Inmarsat, arrived as sponsor. The fact the rally was run at all was some form of miracle. A group of enthusiasts independently submitted outline plans for the event, but the organisation was sorely stretched. Starting the second half of a season where six manufacturers were competing, this was the era before SuperRally or Restarting opportunities were introduced, so once you were out you were out.  There were 16 registered team drivers.  This was going to be no traditional Safari. On an event in which gaps between cars were often measured in hours, the leading margin this year was never to be more than four minutes. The format of the rally had changed. There were only four different stage venues, and every stage was driven twice in one direction and once in the other, but nobody knew if this three time use would create problems. 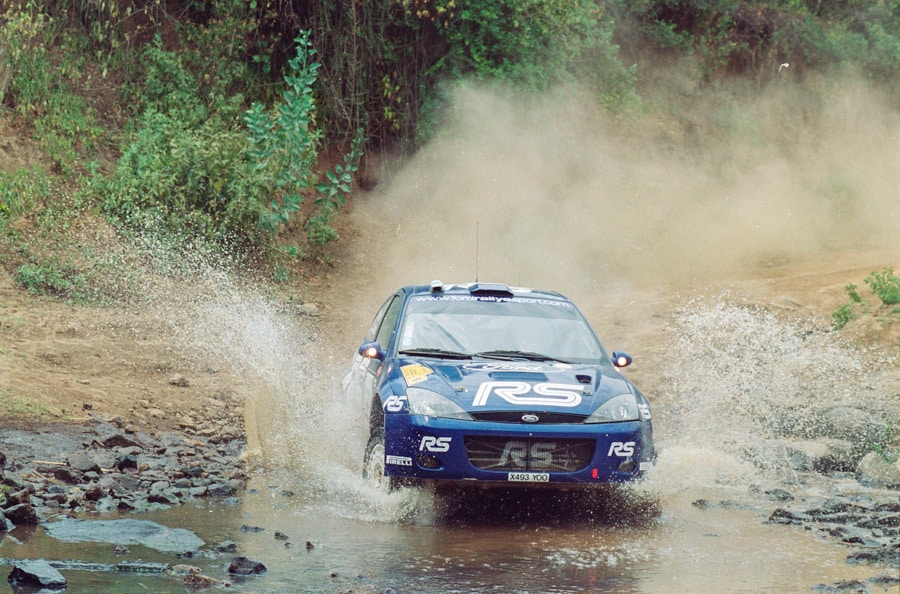 Judging what speed to drive at on the Safari Rally made the event difficult for drivers. Photo: Martin Holmes

With a total competitive distance of 935km run over terrain that former World Champion Tommi Makinen (Subaru) declared had no place in this type of sport, the World Rally Cars themselves proved immensely reliable. M-Sport's chief engineer, Christian Loriaux, explained: “Statistically this event sees more top car retirements than any other. That tells us that reliability is more important than performance.” Ford gained their third win in three rallies and Colin McRae achieved his 25th win, becoming the winning-most World driver to date.  In championship-terms, however, the Safari was a shock for Peugeot.  Winners four times in the first half of the season, their championship leader Marcus Gronholm only completed 17km before retiring with engine trouble. The event was to provide Skoda driver Roman Kresta with the highest placed result to date for a Czech driver (7th).  Alongside McRae at the Ford team was Markko Martin, who had never been to Africa before and he explained to us what his experience was like. “Finally I came to Africa, which was certainly quite different to anywhere I had been before! It is a big shock when you arrive, but I suppose after a while you get accustomed to it,” Martin said. 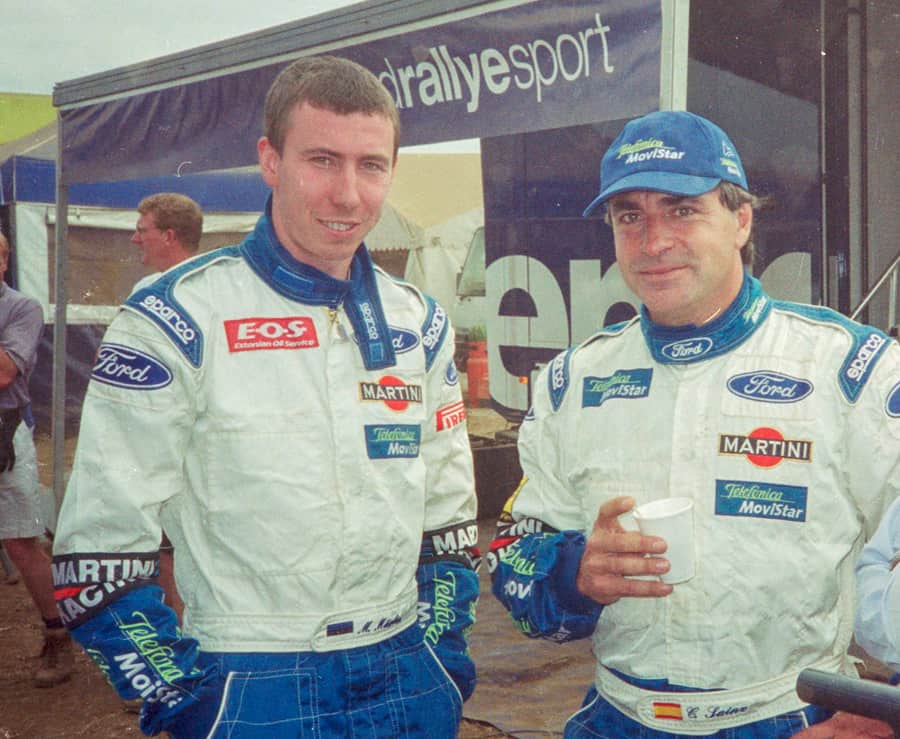 “Obviously for tourists, when you leave Nairobi and get into the country it is a very nice place and you see lots of wildlife everywhere. In a city like Nairobi one cannot expect to walk around outside the hotel very much, though one day Colin McRae and I decided to take a walk rather than take a taxi, and I don't think I would like to do that again... “You certainly don't feel safe walking around. It was quite different at Suswa where the Service Park was based. It was really out in the wilds, absolutely different – but was it really an ideal place to base a world championship rally? “We used Freelanders rather than our usual Volvos for the recce. They are very good cars, the only downside for me was they had automatic gearboxes. I would have preferred manual! “Immediately we started recce we had to drive the most difficult stage of them all.  It almost blew my mind. This wasn't rallying in any recognisable form at all!  Even after we had finished the recce, however, I had no real idea what sort of pace to follow on the event. All we could do was to drive the first stage and see what happened. “The Safari is a matter of finding the right pace to drive. It is not a driver's rally. Anyone can win this event if they drive at the right pace and keep out of trouble. Sometimes it can be very difficult to even find the right road to follow.  The land can be open with many tracks, each with sudden holes or dips which you cannot see. “Making your pace notes for this event is completely different, you have to rely on your notes and listen to them very carefully. They have to be a lot more complicated than in Europe. It is not that they are more precise, it is that other types of information has to be given. There is, in fact, very little information about actual corners! 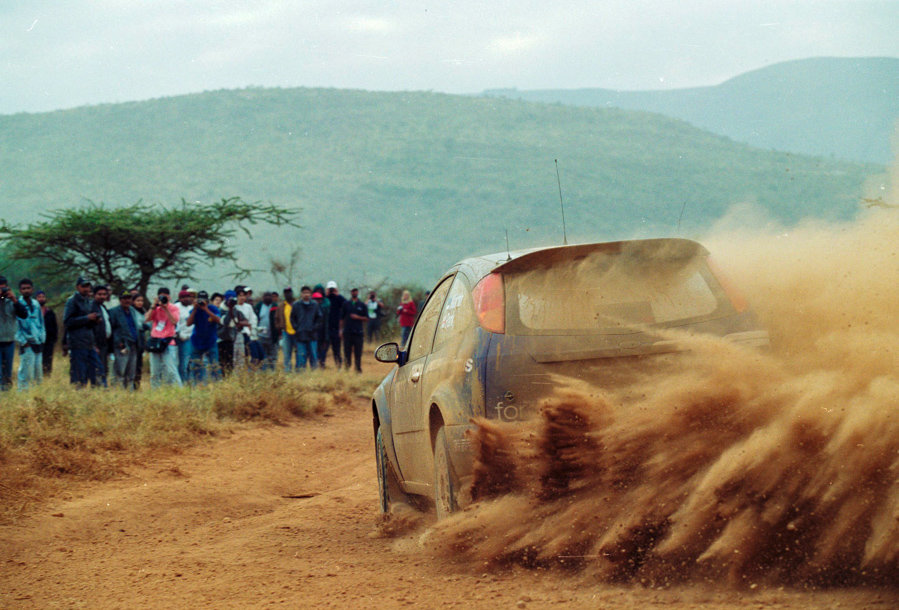 Fourth place was a good result on Markko Martin's one and only Safari Rally appearance. Photo: Martin Holmes

“The high speed of the rally means that we have a lot of difficulty making notes as on the event we driving at twice the speed as on the recce. 200km/h instead of 100. Impossible to judge accurately just how bad the bumps and the jumps will be. And, of course, when we made the recce it was dry all the time, so I had absolutely no idea what the conditions would be like if it was wet. “I think I would prefer the old longer style event. I am not sure that trying to make it more like a European sprint event is the best direction. What I do know is that the routes in places were unbelievably bad. People from Europe could not imagine how rough it is. I was just speechless. 25km of constant bang, bang, bang, so rough because of the bumps and wash-aways in the road. “How you go about driving a rally like this is different in many ways. Nobody can really tell you how to drive, you have to make up your own mind.  They say you have to go slow to be sure to finish, but I didn't realise how slow!  The rally was just too fast, having to adjust between driving flat out to then driving slowly over very rough parts.” The 2002 edition was actually won at an average of 117.28km/h, which was only 4.52km/h slower than Rally Finland that followed it in the series, which was run over smooth asphalt-like gravel. “Our Ford Focus WRC itself had a lot of different equipment fitted, snorkel on the bonnet, special lamps and so on. The set-up was quite a bit higher off the ground than on other events, it was heavier as well,” Martin explained. 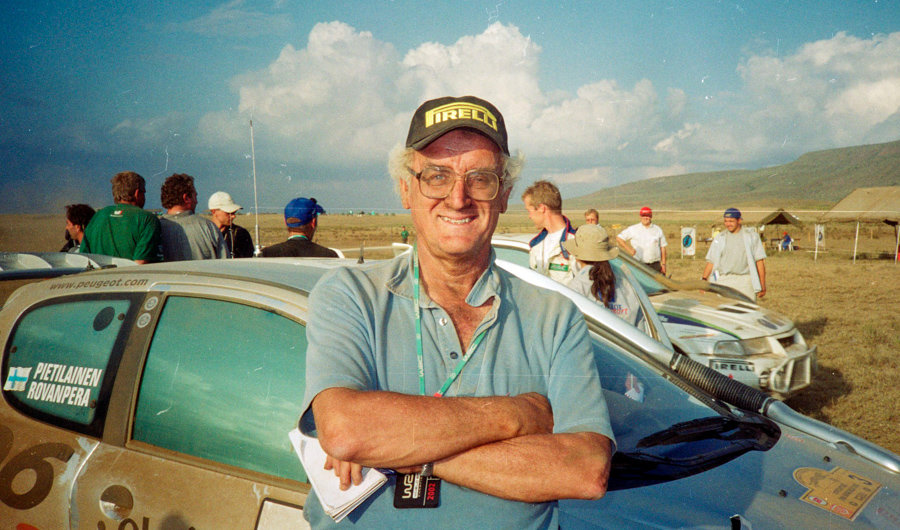 “In fact things went well on the rally! After a while we found what seemed to be a good pace. We had been third fastest on the first section but realised that was too fast.  We backed off on the second and got two punctures, but then we settled down at a good speed. “Inside the car it was different physically than other rallies. It was quite tiring because the rally was longer and we always had a very early start in the mornings. You do not sweat when you are driving on the competitive sections like on other events, but it is very hard on the arms and wrists. You are gripping the steering wheel so hard for such long times. “It took some while to understand the notes, because they were so different to elsewhere. We only had three punctures all rally, even though we were not using the mousses except on the very first section. Obviously, we had to look after the tyres on the rocky parts, but the decision not to use mousses worked well. “And the car was incredible! It was so strong and reliable. You cannot break the car. You will hurt yourself before you hurt the Focus. Before the rally we tested the car going flat out over the roughest roads we could find, trying to identify any weak points. I had a ride in the test car with Colin on one section, and he said my face was amazing afterwards. I just couldn't believe what the car could withstand. 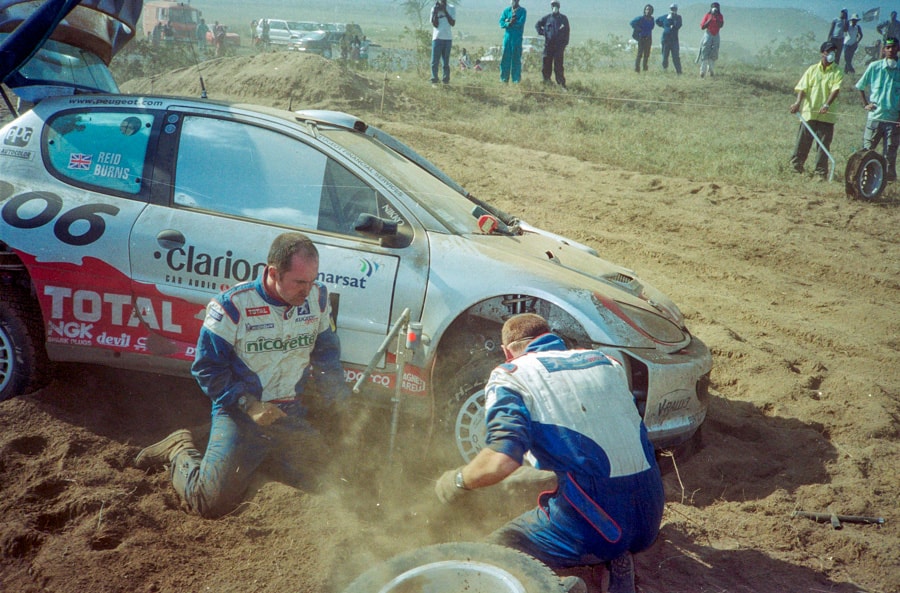 Richard Burns (right) and Robert Reid had to retire their Peugeot 206 just metres from the service park. They had broken front suspension and were bogged in the sand. Photo: Martin Holmes

“On the event, we had a little problem with shock absorbers which upset the handling from time to time, but nothing major at all.  The only real technical problem we had on the rally was at the end of the second day. Colin was leading overall and we were lying in third place behind Harri Rovanpera (Peugeot) and ahead of Thomas Radstrom and Sebastien Loeb (both in Citroens). “My other Ford teammate, Carlos Sainz, had retired on the second day because of an oil pump belt failure so the team decided, for safety, to change these on Colin's and my cars. This was when they noticed the cambelt also needed to be changed on my car and when the work was finished the car did not start. It had flooded with fuel, but they thought initially it was a timing fault. “They tried everything to get the engine going again, and time was slipping away. This dropped us to fifth place behind the two Citroens, but when Loeb had to slow down with shock absorber trouble we were able to finish fourth. “We had our own panic on the final day as we did not have the correct set of pacenotes in the car for the first section. Driving any section without them was not the best idea, so we had to be very careful not to hit any of the big holes. It wasn't helped by being quite dusty, so we could not see very far ahead, either. Then we also lost the rear brakes, so we were really glad when we reached the end of the stage.” 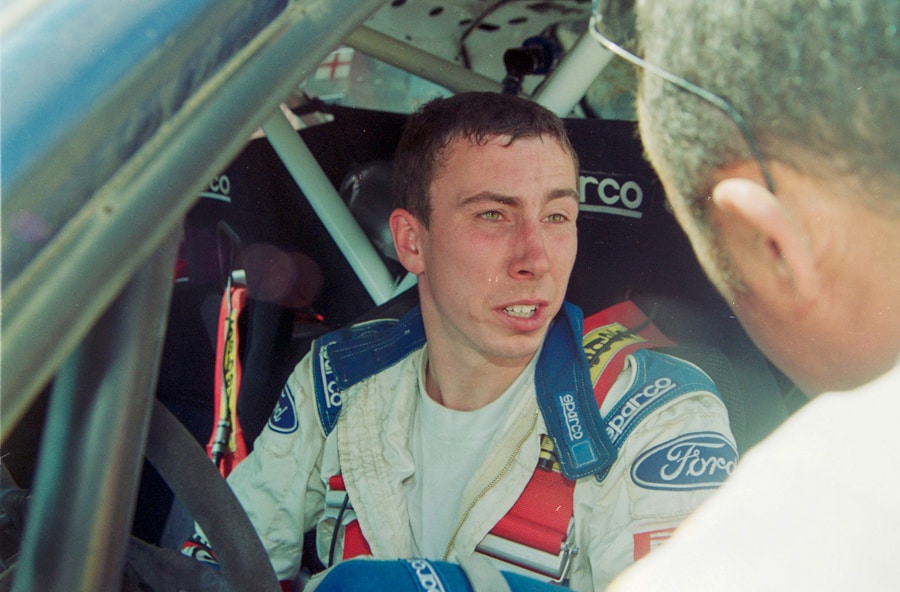 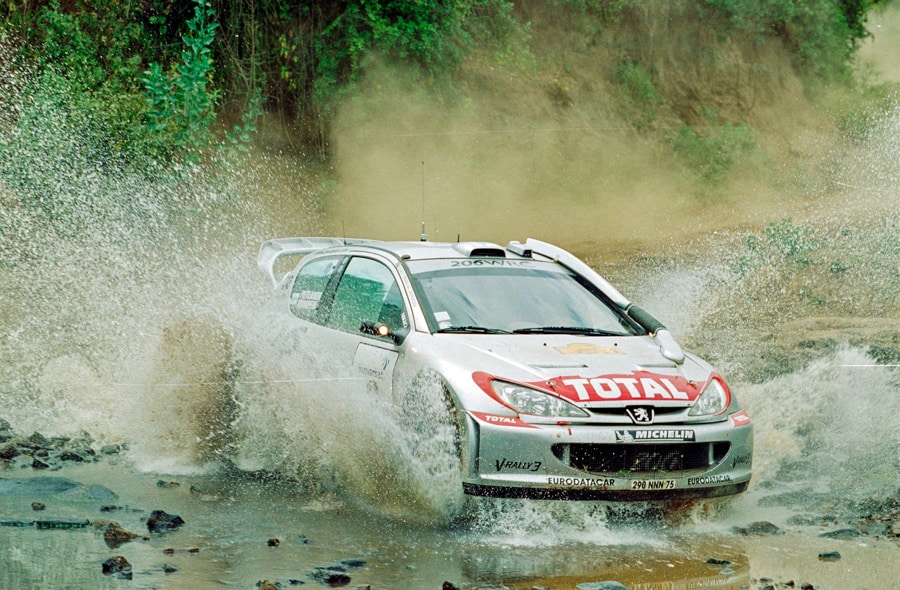 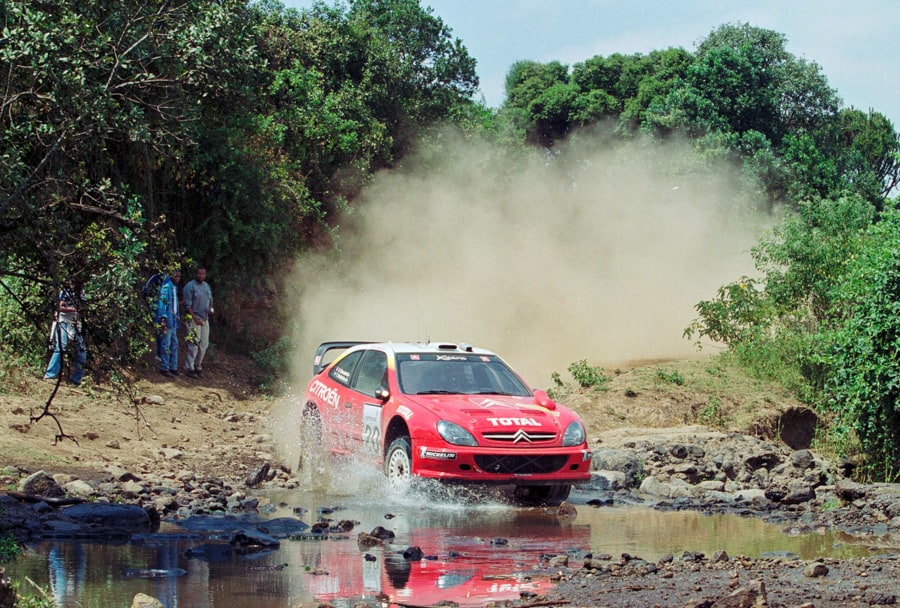 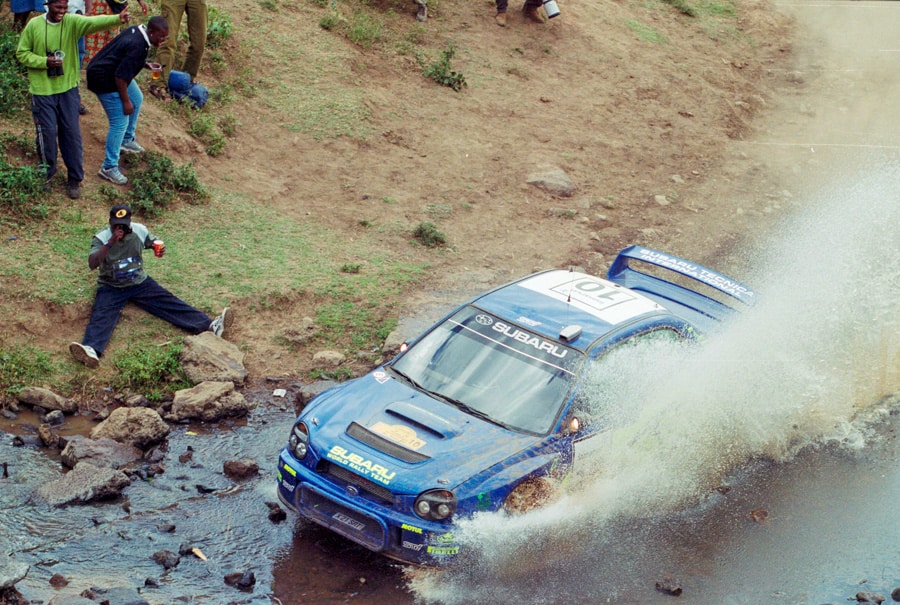 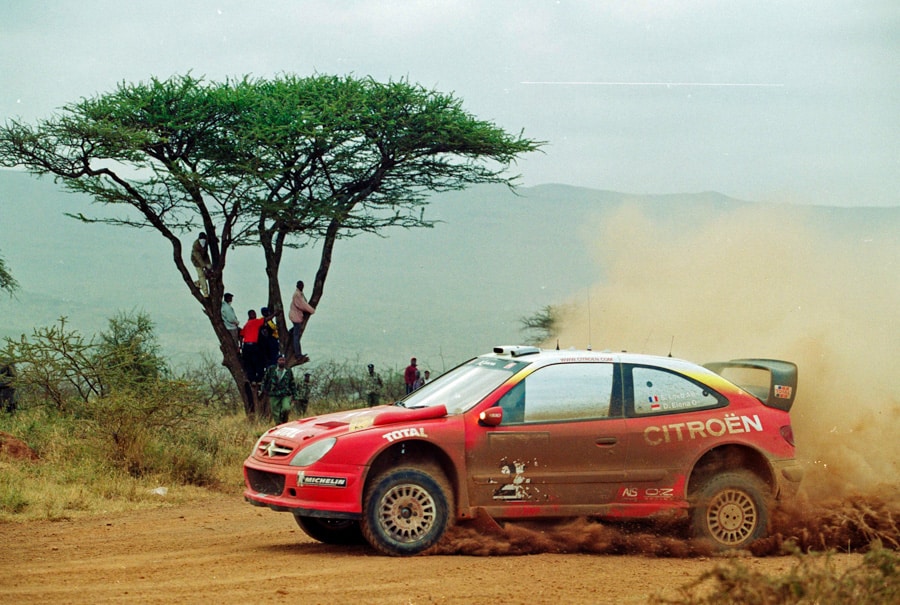 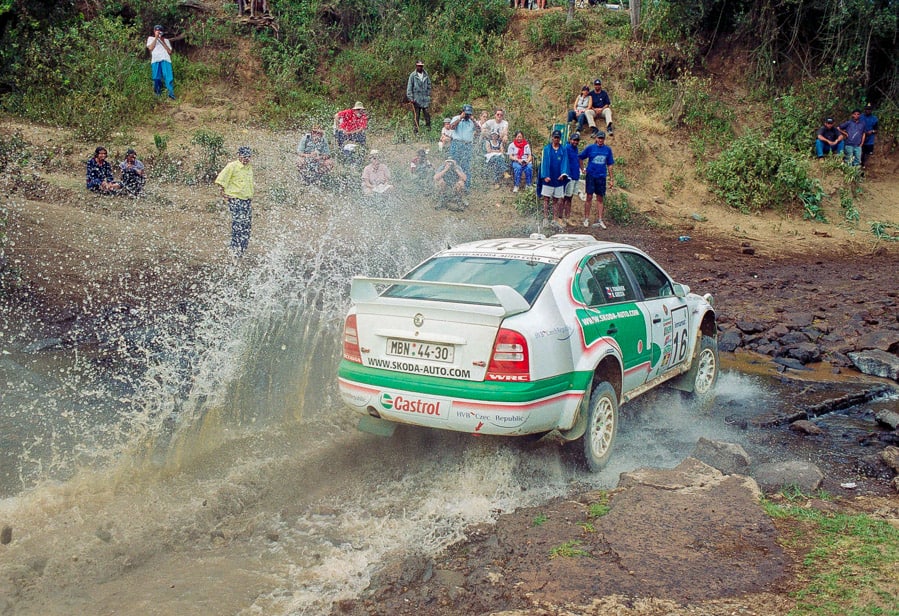