In September 1989, the World Rally Championship descended on Australia for the first time for an exciting event based in the Western Australian capital of Perth.  Rally Australia was a popular addition and an event that changed many aspects of how the WRC was run. * * * * * In 1989, Rally Australia presented the sport with an entirely new set of circumstances, and instigating one of the most popular annual events in the series.  The FISA (then the governing body) had fast-tracked the event into the WRC without first holding a customary Drivers championship-only event, in fact only one candidate event had previously been run. 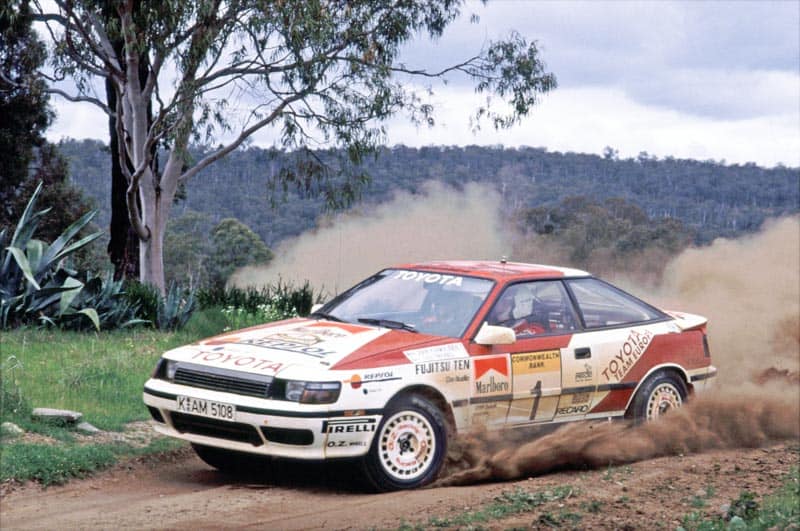 Its entry was justified by highly enthusiastic reports from the candidate event the year before and facilitated through the cancellation of the WRC event on the west coast of the USA. Australia was the first new country in the calendar since Brazil eight years earlier in 1981, and it was almost like the teams had forgotten how to adapt to novelties. 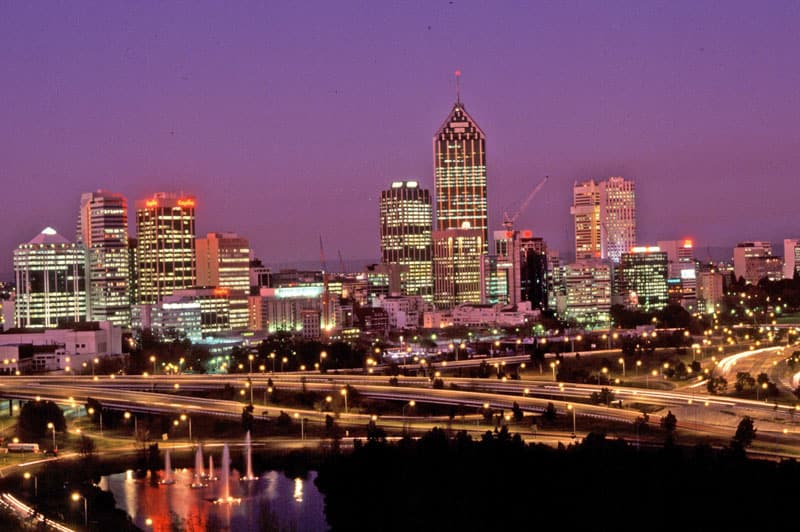 Perth was a new addition to the WRC calendar in 1989. Photo: Martin Holmes

Michelin proudly announced they had no need to check out the terrain in advance, only to discover the remarkable phenomenon of the bauxite ball-bearing stones, and hastily had to discover the art of tread block cutting overnight! Teams and organisers from the east coast of the country were unable to travel to Perth, because of a national airline strike, forcing them to reach Perth by routing their journeys through Singapore or New Zealand.  It was a miracle that the event actually happened. Australia brought a breath of fresh air into the championship.  Quite apart from introducing new situations, natural things like dieback tree disease, snakes in spectator areas and badly behaved kangaroos who jumped into the special stages, it embraced the new cloverleaf route format. 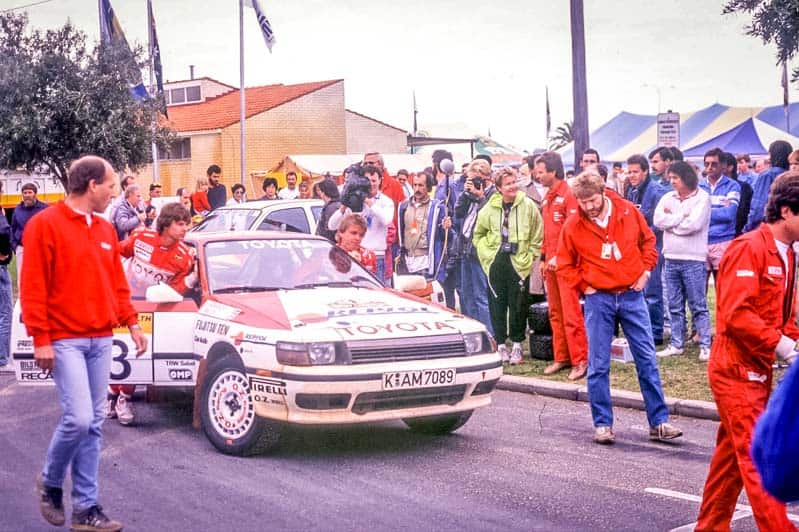 Kenneth Eriksson pushes his Celica out of parc firm at Langley Park in 1989. Photo: Martin Holmes

It also launched into ground breaking policies of spectator friendly super special stages and full reverse order running for progressive excitement, and in later years was the first event seriously to react to the running order problems created by dry loose surfaced stages. Rain was not unknown in the area and water on the roads did not easily drain away, which left them soft until the sun dried them out.  The biggest hazard was the proximity to the sides of the roads of the trees, some of which actually grow in the middle of the road! Coming in September, the rally sporting world was already embroiled in the then-annual flurry of driver placement for the following season, exacerbated by the promised arrival in the WRC of Subaru in 1990. 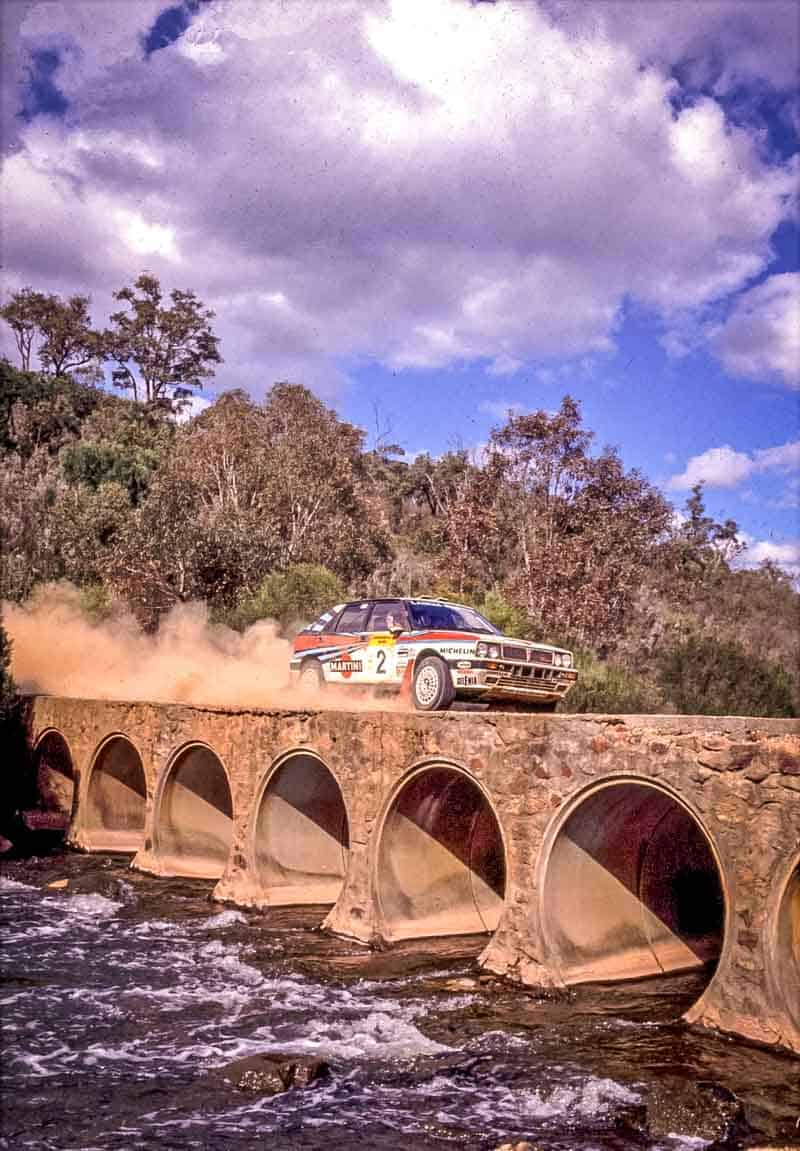 Markku Alen was third for Lancia in his Delta Integrale. Photo: Maurice Selden

Michael Ericsson, winner of the two previous WRC events that year, was suddenly dumped by Lancia, who cancelled his entry in Australia because he had been negotiating to drive the next year for Toyota, replacing Kenneth Eriksson. This news appropriately motivated Kenneth, who determined to make a good showing on this event. Toyota driver Juha Kankkunen, meanwhile, had decided he would go back to Lancia after two seasons of almost non-stop disasters with the turbocharged four-wheel-drive Celica GT Four model, notwithstanding that Toyota had just announced a replacement production model on which their next rally model would be based. Actually, the next model was not rallied until the start of the 1992 season.  Altogether there was never a boring moment as the rally approached. Five teams sent full works entries to Australia.  Toyota, General Motors, Mazda, Lancia and Mitsubishi, with Suzuki entering two-wheel drive 1300cc Cultus cars and the Simon Racing team sent their two-wheel-drive Renault 5 GT Turbo for Alain Oreille. 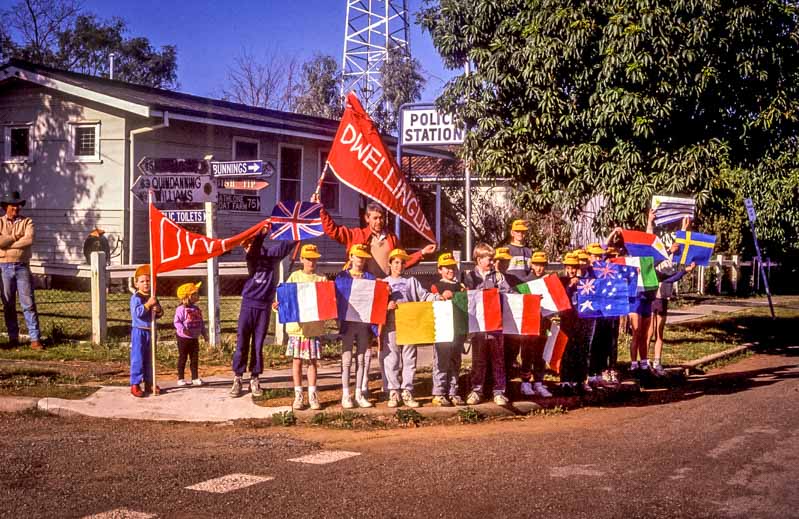 Despite running away with the championship that year, this was to be the final appearance of the eight-valve Lancia Delta Integrale before 16-valve versions were introduced at Sanremo, and Lancia’s self-confidence was at a low ebb, not helped by Michelin not taking the event seriously. And rightly so. The Toyotas were uncatchable, winning 29 of the 32 stages, with Eriksson winning more than the eventual winner Kankkunen, but it had not been straightforward.  Eriksson had a problem at end-of-day service when the engine would not restart and the car had to be pushed into the parc ferme control. This flummoxed the officials who did not know if this was allowed or not, and who imposed a series of penalties, dropping the second placed Eriksson temporarily down to fourth. 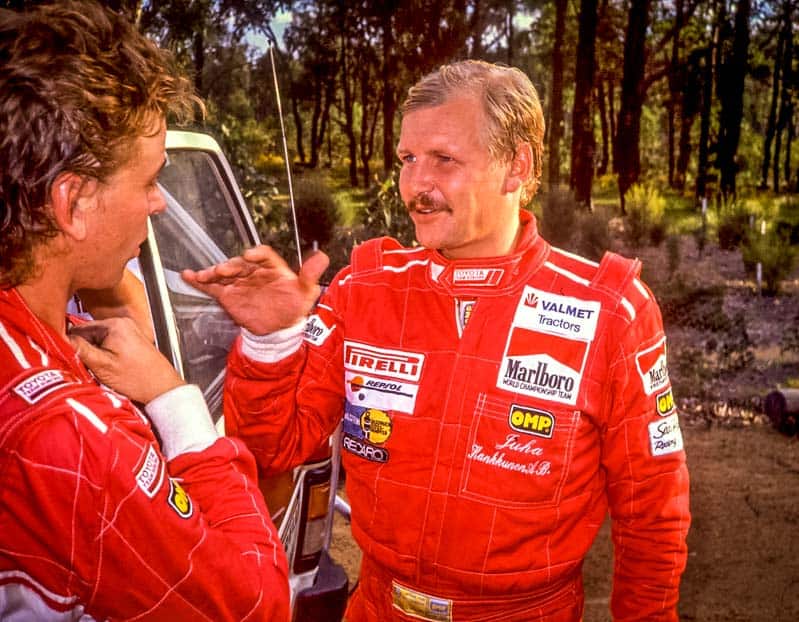 The eventual one-two result for Toyota was the climax to a long and arduous development period which had been ongoing since Corsica in May the previous year. The effect the eventual victory had was spectacular.  The original 4x4 Celica, called the ST165, went on to win a total of 13 world championship rallies, its successor the ST185, won 16, and the final version (ST205) won one other. Toyota had moved on from being a specialised team good only for African rallying into a permanent force in rallying all over the world. 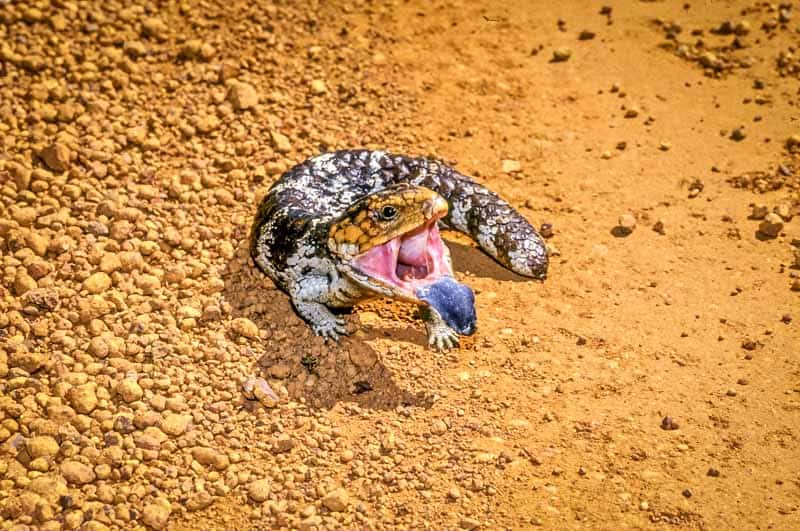 The effect the victory had on Juha Kankkunen is another matter, which has never been clearly charted.  The victory was a monumental affront to his recent decision to abandon the team. As Toyota won five rallies in 1990, Kankkunen only won one event that year with Lancia, in Australia once again. Exactly how Juha celebrated his victory that evening is unreported, but he was certainly looking very ill at prizegiving the next morning, and colleagues mentioned that he had mysteriously broken some ribs during the rally.  Obviously no laughing matter for the popular Finn! 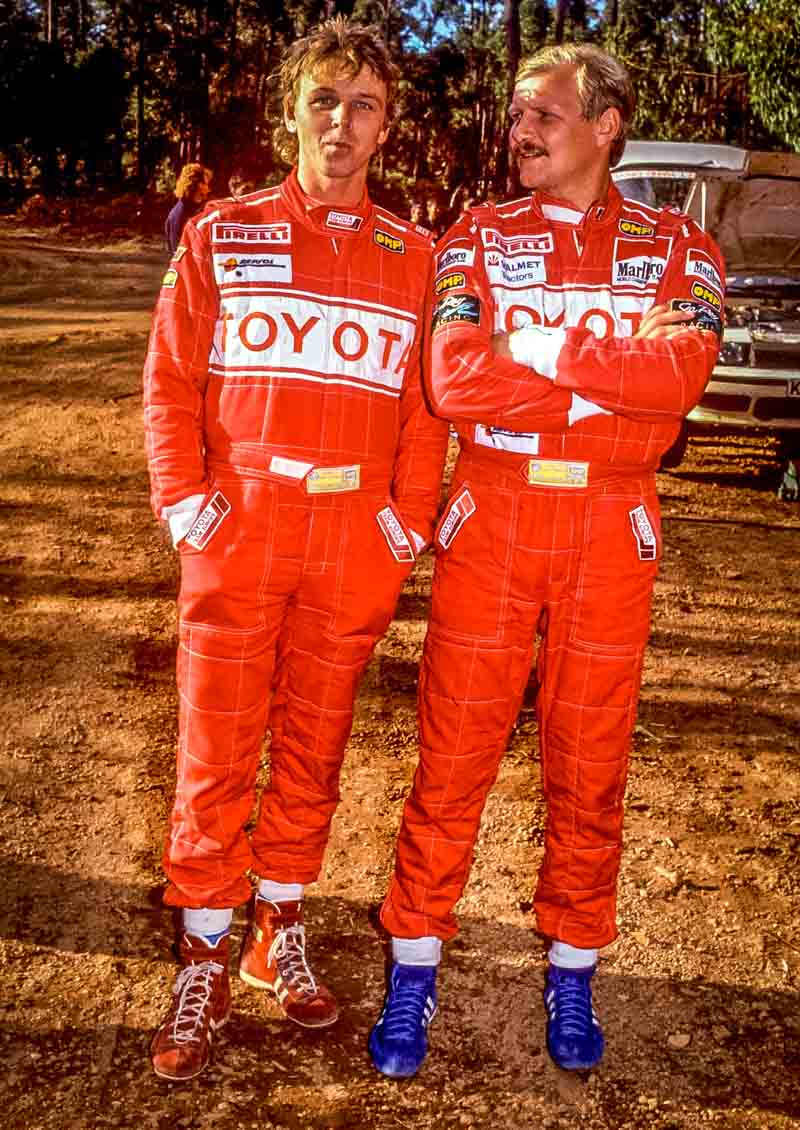 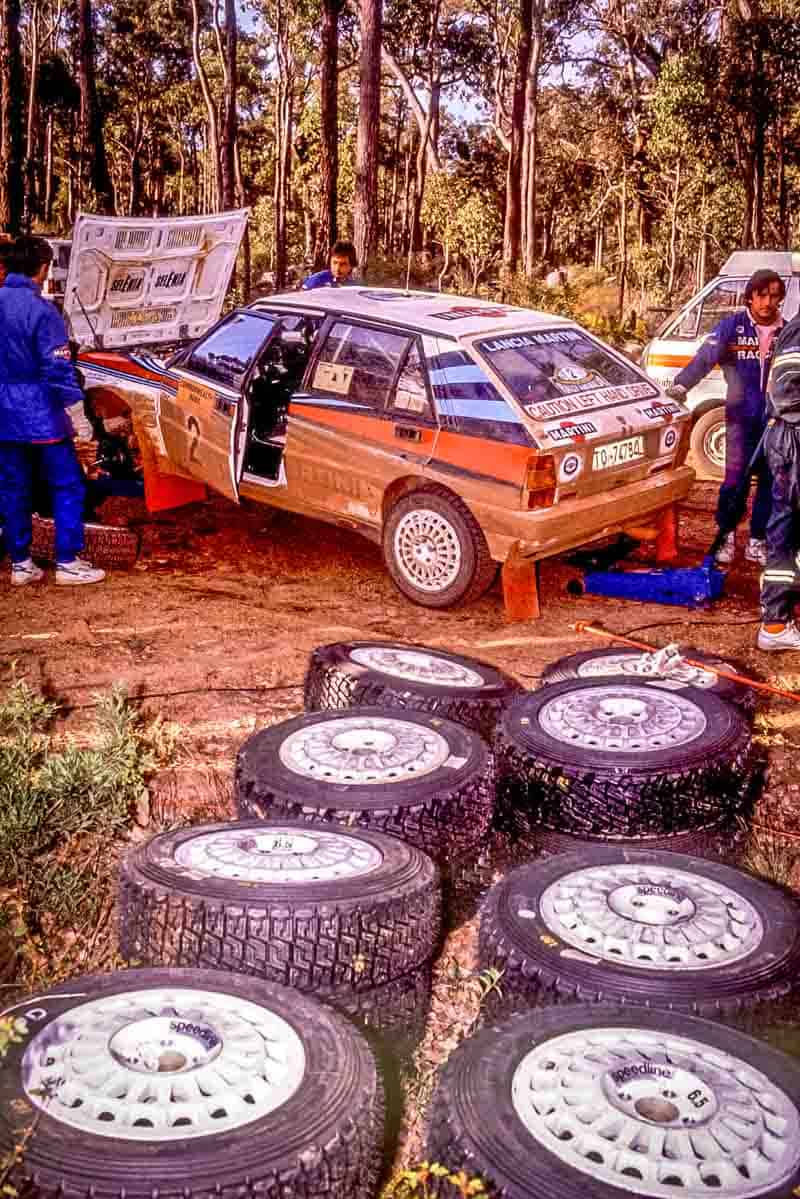