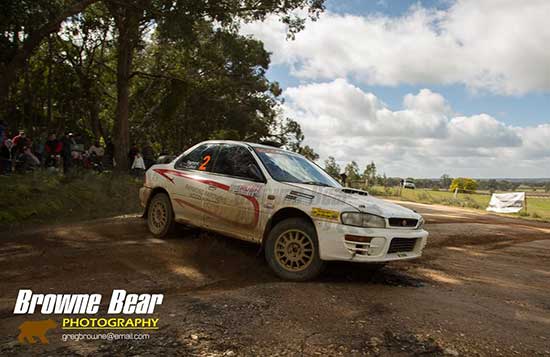 Glenn Raymond won the Pyrenees Rush VRC round in his Subaru.

Former ARC round winner, Glenn Raymond, took out the third round of the Victorian Rally Championship, the Pyrenees Rush, on Sunday.

Driving a Subaru Impreza WRX, Raymond and co-driver, Kate Catford, mastered the wet and slippery conditions around Avoca to win by over three minutes.

The top five were rounded out by Wayne Stewart and Lucas Zinsstag (Subaru) and Franco Liucci and Gavin Niall in a Mitsubishi.

The tricky conditions led to a long list of retirements, headed by the Mini Cooper AP4 of Eli Evans and Glenn Weston.

Hoping to use the event as a test session before the ARC round in South Australia next month, Evans retired on the very first stage with a driveshaft failure.

Full results from the Pyrenees Rush can be found HERE.