Reeves on top after two-way tussle at NatCap Rally

Round one of the 2014 East Coast Bullbars Australian Rally Championship (ARC), the National Capital Rally, turned out to be a two-horse race after reigning champion, Eli Evans, was forced to retire on day one after mechanical issues in his borrowed VW Polo.

The Mazda2 crew of Brendan Reeves and Rhianon Gelsomino set the early pace, taking the Power Stage victory on Friday and backing it up with a Heat 1 win on Saturday.

Evans' winning streak of 12 rallies came to an abrupt end when he broke a driveshaft in the morning stages and failed to re-start after lunch, and Reeves' other main rival, Scott Pedder (Renault Clio), also had a scare when he suffered mechanical problems in stage 4, resulting in considerable loss of time. He limped back to the mid-day service and, with assistance from both Reeves' and Evans' service crews, managed to get to the start line of SS5 just in the nick of time.

For the remainder of the day, Reeves and Pedder fought a tight battle with just seconds separating them on the afternoon's four stages, but Reeves held the upper hand and finished the day on top, three minutes clear of Steven Mackenzie (Ford Fiesta). 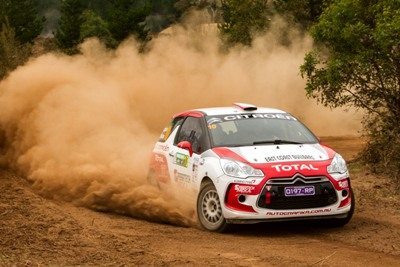 Adrian Coppin was second overall in the National Capital Rally.Citroen's debut in the ARC provided mixed emotions for the team. Adrian Coppin/Tim Batten brought their DS3 R3T home in third place in Heat 1, whilst Tony Sullens/Julia Barkley suffered fuel starvation and a spin, but managed to complete the day in fifth.

In Heat 2, the battle at the top was again between Reeves and Pedder, both again trading stage times throughout the day. Reeves had a two second lead at the lunch break, but Pedder fought back and led by 1.2 seconds going into the final stage. Reeves pulled out all stops, winning the last stage of the rally by 6.6 seconds and beating home Pedder by 5.4 seconds overall, to make it a clean sweep for the weekend.

The anticipated dust problems weren't evident in Canberra thanks to rain on Saturday, and whilst the roads were slippery in parts on day one, conditions on Sunday were close to perfect.

After their debut ARC victory, Reeves and Gelsomino lead the ECB Australian Rally Championship with 81 points, followed by Pedder/Moscatt on 61 and Coppin/Batten on 60.

The big question on everyone's lips now is will Eli Evans have his Honda Jazz ready for the next event, the QUIT Forest Rally in Busselton in early April?

We'll have lots of John Doutch's great photos from the NatCap Rally on the website tomorrow. Watch some video highlights from the National Capital Rally HERE.