Ott Tanak scored his eighth WRC victory at the inaugural Copec Rally Chile, leading from the second stage to the finish and pulling himself up to second in the World Rally Drivers’ championship, 10 points behind the leader, Sebastien Ogier. Hyundai still leads the manufacturers' series, but Toyota has reduced their lead. Chile was the first new country in the WRC for nine years, presenting completely new territory for crews, leading to many consequent off road excursions and pacenote errors for top crews, including a heavy crash for Thierry Neuville. Kalle Rovanpera was unchallenged in the R5 categories after Mads Ostberg was delayed by brake trouble, while Takamoto Katsuta won the WRC2 Amateur class. 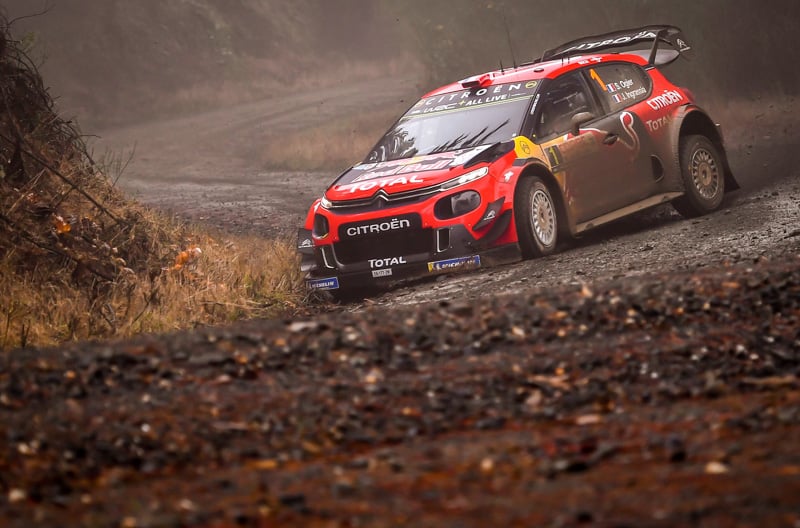 Through all the carnage, Ott Tanak survived! The Copec Rally Chile was a brave new venture for the WRC Promoters, the first new country in the WRC since Bulgaria Rally 2010. Chile was a surprising choice of location for a new event given that the promoters had vowed to expand the championship into new continents, not into countries adjacent to existing WRC territory. It highlighted the championship promoters’ wish for a fresh spirit in the sport rather than being confined to long established traditions. Although there were many problems inherent in lack of organisational experience, not only in the organisational planning itself but among those who helped make it run and also among the competitors and crews, it was a fascinating rally. 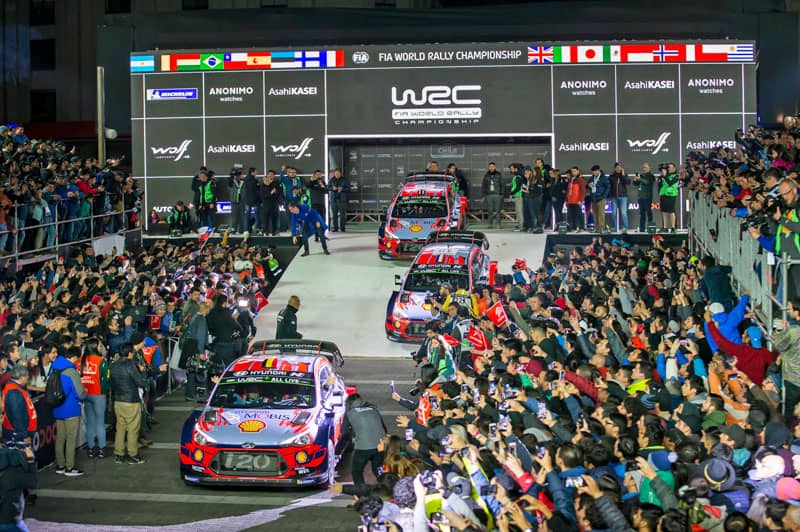 Hyundais leave the start of Rally Chile in Concepcion.

With pre-event testing banned in the country, engineers were hard pressed deciding on relevant technical set-ups, while the need to use completely new pacenotes gave co-drivers an unprecedentedly long and difficult week. The event itself was well conceived. It was based at Concepcion, the third largest city in the country, using gravel stages with very smooth surfaces which were managed by the national forestry and fuel supply conglomerate Copec, the event’s title sponsor. The FIA sought to smooth out the teams’ practicalities by giving a date just two weeks after Argentina and ordering teams to run the same cars on both events. 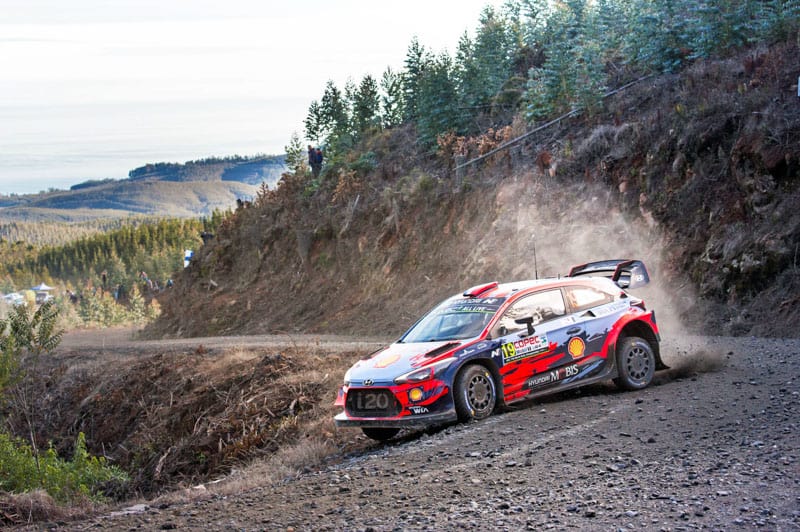 Sebastien Loeb showed good speed to finish on the podium for the first time in a Hyundai.

In the event, Citroen had to fly out a replacement car after Lappi crashed his car in Argentina and M-Sport had to withdraw Elfyn Evans’ car in mid event, to give more time to repair the car after he crashed as well. Trucks were used to transport the cars from Argentina to Chile by road. Toyota led the event all the way, starting on the first stage when two of their drivers, Jari-Matti Latvala and Kris Meeke, tied for best time, before Tanak moved into the lead on the second stage. He was soon being chased at a distance by Latvala who was battling with Thierry Neuville and Meeke. 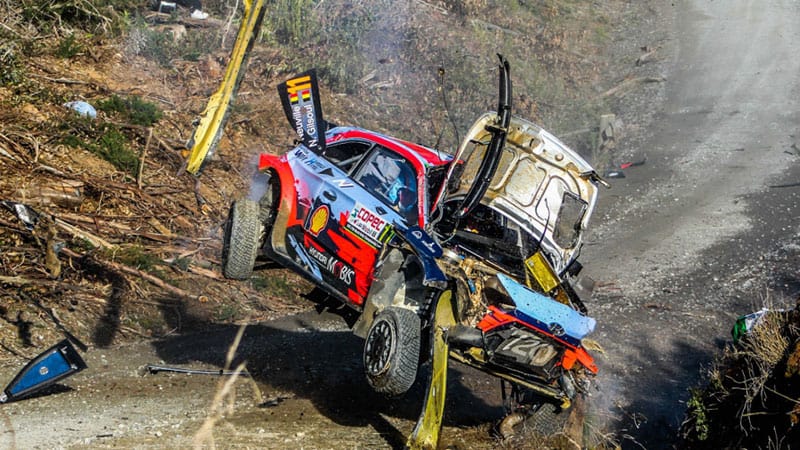 Thierry Neuville's massive crash has cost him the lead in the WRC.

There was a delay when the second stage was stopped as Neuville, running first car, was Red Flagged as the course had not yet been cleared by safety officials. Then came a dilemma, what notional time Neuville should be given, considering the benefit he had then enjoyed on the following stage by running with scarcely worn tyres? On the first stage on Saturday Meeke slid wide and rolled, losing time having his car pushed back onto four wheels before proceeding after immediate repairs at almost unabated speed. On the second stage of Saturday, Neuville drifted wide after a very fast crest and his Hyundai was launched into a series of damaging rolls. This resulted with both him and co-driver Nicolas Gilsoul being flown to hospital for checks and the stage being halted. 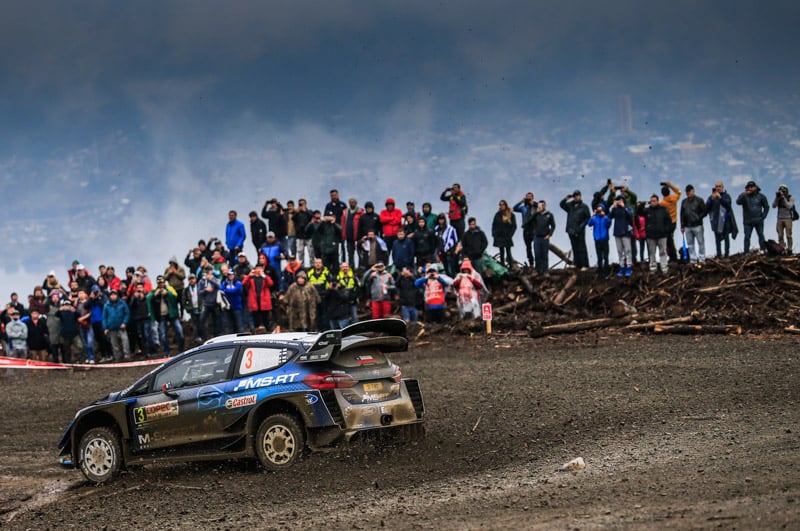 Latvala, meanwhile, had been baulked by his teammate Meeke’s damaged car and it was some hours before the organisers announced a suitably equitable adjustment to his stage time. When eventually settled, it was seen that Ogier was still under pressure from Latvala, who himself was being hounded by Ogier’s old nemesis Sebastien Loeb. The weather then took a turn for the worse. After beautifully clear skies on the Friday when crews enjoyed driving on the softer medium compound tyres, they had selected harder tyres for Saturday, as the stages were expected to be more abrasive. 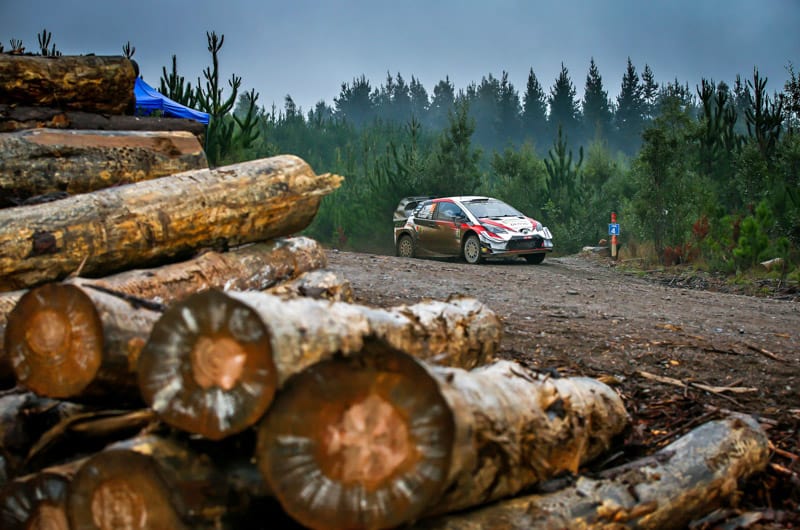 Jari-Matti Latvala had another disappointing event for Toyota.

On the final stage on the Saturday rain and fog unexpectadly descended, and Latvala misjudged a bend and damaged the transmission on a rock. Loeb was now up to third and an intense battle between the two Sebastiens began. Tanak was more than a half minute in front, but Loeb was only 5.2 seconds behind Ogier. Gradually teams were accumulating a lot of knowledge about the challenges of this event for next time. Once again M-Sport were out in the cold with Elfyn Evans’ only competitive stage being the last Saturday stage before the weather closed in, but he drove steadily to finish fourth, with Teemu Suninen fifth. M-Sport were the only team with two cars in the top five. 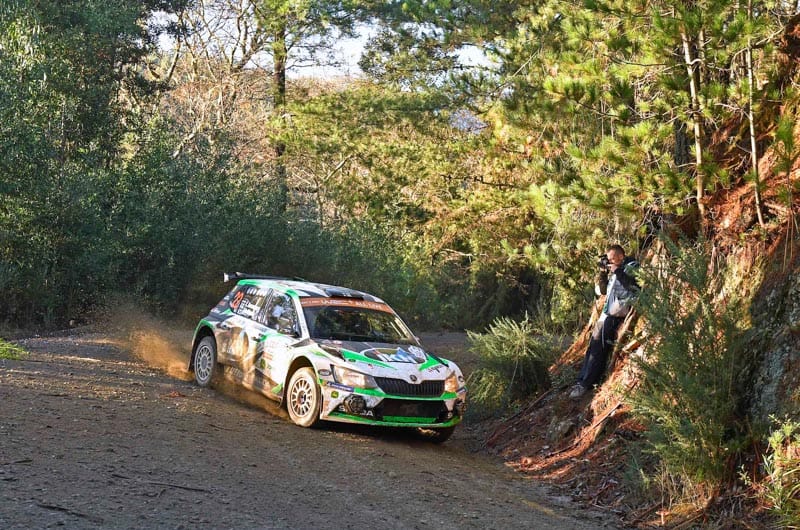 At Citroen Esapekka Lappi was again determined to master the C3 WRC, but it was a struggle and Hyundai’s hopes of continuing the battle with Toyota for the Manufacturers’ series were dented by the misfortune of Neuville. Andreas Mikkelsen had been driving very easily up till then, but when Hyundai’s team was down to two cars he was told to speed up. Tanak crowned a glorious weekend by then winning the Power Stage, while Ogier scored second best time, despite feeling fuzzy from a leaking fire extinguisher … Among the R5 cars, Citroen driver Mads Ostberg led the way in the WRC2 Pro, but Kalle Rovanpera passed him in his Skoda on stage 4, while on the first stage of Saturday Ostberg had brake pipe failure, falling more than a half minute behind, but still second R5 car. 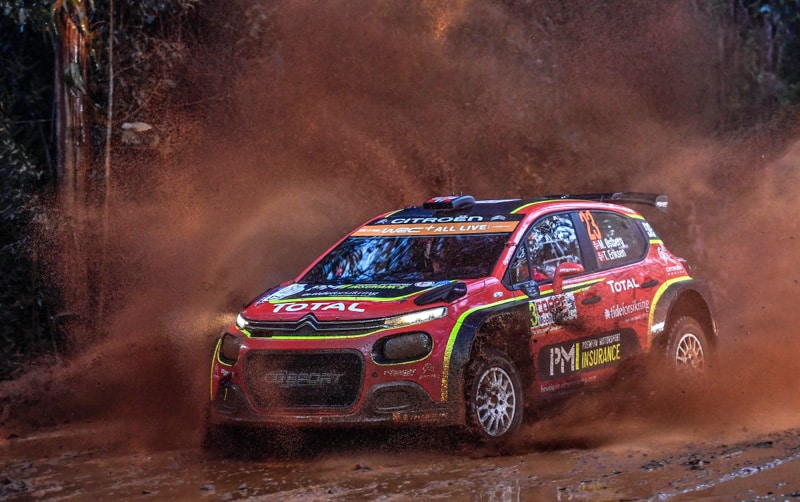 On the Friday, R5 cars suffered from stage cancellations, but Alberto Heller went into the lead of WRC2 Amateur until Takamoto Katsuta got in front of him at the end of Saturday. Then three stages from the finish of the rally Alberto Heller crashed and retired. His brother, Pedro, had already had a chequered rally, having clutch failure on the Friday. It had truly been a memorable rally.
Final Overall Classification – Rally Chile
2019 FIA World Rally Championship for Drivers’ Standings After round 6
2019 FIA World Rally Championship for Manufacturers’ Standings After round 6
All results remain subject to official FIA confirmation.