Fifteen years ago, in 2000, Australian Rallysport News was in full swing, and printing a monthly newspaper dedicated to rallying was a full-time job. Sadly, those days are long gone, but we can at least look back on some of the stories that featured in those issues.

To start off, here’s a look at the history of Nissan / Datsun in Australian rallying. Enjoy.

Timo Makinen's Datsun 710 at the start of the Southern Cross Rally.Haven't Nissan had a chequered career in Australian rallying? Very little is heard about Nissan rallying these days, a far cry from the seventies and eighties when the red, white and blue factory cars were the dominant force in Australian rallying.

Which is a shame because a large proportion of Aussie competitors cut their teeth behind the wheel of a Nissan or Datsun product, most likely a Datsun 1600.

When the Australian operation pulled out of motorsport after the infamous Godzilla era (which followed the successful Nissan Bluebird Turbo touring car project), the Japanese manufacturer severed all ties with motorsport in this country. Their rally program, one of the most professional and successful that Australia has seen, folded after many years of full-on competition which saw cars such as the Datsun 710 'SSS' Violet and the Datsun Stanza sweep all before them.

In Great Britain, Nissan continued for a few more years, developing their front wheel drive Sunny, a 2WD derivative of the semi-successful Nissan Pulsar GTiR 4WD turbo that was used for a while in world-wide competition.

Sadly, the factory have given motorsport away, concentrating on rebuilding their catastrophic financial losses which left them short, presumably, of the money to go rallying.

The Australian association with Datsun rally cars started way back in 1968 (yes, 31 years ago) when a few privateers entered the then-brand new Datsun 1600s in some of the period's rallies. In fact, Australia was one of only a very few countries where Datsun 1600s were the most popular cars for rallying.

The 1600 was the car that, in this country, enabled the talents of a large number of top drivers to be proven, and saw many of them go on to much bigger and better things. In Group G form, the 1600 was unbeatable, even against the might of the works cars.

Not that the Nissan/Datsun company ever fielded works 1600's here - they really didn't start to get involved until the 710 Violet, a car never sold in Australia, was brought here for the Southern Cross rallies in the seventies. This enabled drivers such as Ross Dunkerton, George Fury, Greg Carr, Roger Bonhomme and others to make their mark at the highest level.

While the 710 was successful here, because it was never sold in Australia, Nissan turned to the 240Z sports car and the Stanza (which was  marketed here) as their factory-supported rally winners.

As history records, both 240 and 260Z's, as well as Stanzas, went on to take numerous victories. In fact there were a number of factory-supported 240 and 260Z's around in the mid seventies, Stewart McLeod and Adrian Mortimer recording the car's first ARC victory on the Bega Valley Rally in 1974. 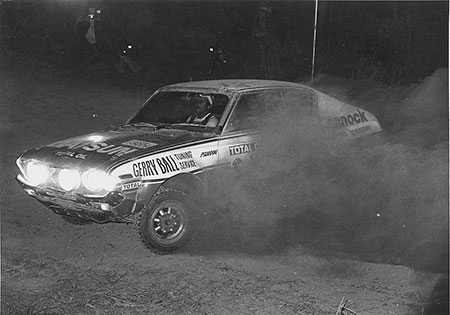 Bob Watson at the wheel of a Gerry Ball Tuning Datsun 710 in the Southern Cross.The 710's winning streak commenced with a win by George Fury and Roger Bonhomme in the Mazda House 1000 Rally in 1975 and went on to score a number of top placings for a year or two. That same year, Ross Dunkerton and John Large took their 260Z to enough point-scoring places to win the ARC outright, so things were looking good for the local factory team, headed by Howard Marsden (now with Ford Tickford).

Several years went by with the marque chalking up consistent wins and places in Group G Datsun 1600s, FJ20-engined 120Y's, 180B's in 'SSS' form,  Zeds and 710's, but Nissan were about to launch the Stanza onto the Australian market.

The Stanza embodied all of the good points gained from years of rallying experience and immediately started scoring wins. In fact George Fury and Monty Suffern, by this time established works drivers, won the first round of what was to be an incredible ARC year. They took their Stanza to first outright in the opening ARC round, the Rally of the West in W.A., repeated the victory in the second and fourth rounds as well, while Stanza-mounted Ross Dunkerton and Jeff Beaumont won round three and Geoff Portman/Ross Runnalls took victory in the final round.

As a result, Datsun Stanzas took a clean sweep of the 1980 ARC series, winning every single round.

The Nissan/Datsun success came at an incredibly bouyant time in Australian rallying, but unfortunately the company's rallying program slowly ebbed away from then on, ending what was an unbelievably successful period for the team. Sadly, Nissan no longer participate in rallying anywhere in the world, despite thousands of enthusiasts flying the flag in nearly any country you care to mention.

Nissan's efforts in events such as the Southern Cross were bouyed by huge support from the Japanese factory at a time when there were not only the Australian-financed 710's competing, but cars from Japan as well.

The Aussie mechanics, by comparison, used no such luxuries and were much more down to earth about servicing.

I remember there was friction between the Japanese and the Australians at a service point in Kempsey over a retaining chain (or steel wire) which linked the chassis frame and the rear of the engine. The purpose of the chain, as fitted by the Aussie team to their cars, was to stop the engine moving forward under heavy braking and allowing the fan to go through the radiator. The Japanese didn't think much of this crude modification performed by the locals and promptly cut the chain off.

You don't need to be a mind reader to know what happened next - shortly after, one of the cars braked heavily and, yep, the fan went through the radiator. Aussie ingenuity scored again!

Of course it wasn't just the works rally cars that performed well, there had to be a fleet of equally potent service vehicles out in the field ready to service the cars at the most remote locations. 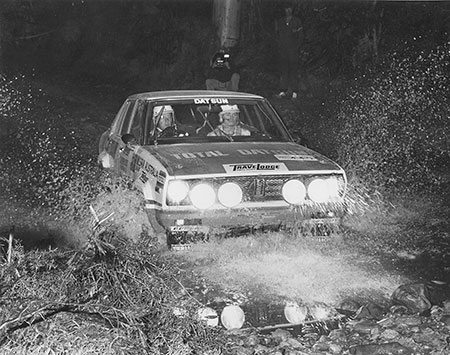 George Fury pushes his Datsun Stanza hard through a water crossing on the Southern Cross Rally.Nissan's service vans were pretty much state-of-the-art in those days and real rockets as far as performance was concerned. The narrow shire roads that were used to get to service points along the north coast of NSW were ideal roads for "having a go" and the works mechanics in their Nissan E20 service vans drove them to the maximum.

I can vividly recall being passed by one heavily loaded E20 at around 130km/h on a back country road. Loaded to the hilt with spare everything inside, and racks of wheels and tyres on top, I was amazed at the speed of what should have been, with that weight on board, a real slug.

When I got to the next service point I remember asking "Twigger" Gale how come the thing was so fast, to be told that the old E20 motor had been junked in favour of a triple-Webered 260Z motor! The ultimate service barge? Maybe.

We wonder if anyone has ever written a definitive history of the Datsun/Nissan involvement in Australia. ARN would love to hear from anyone who has.

Speaking of 120Y's several issues ago, reminds me that the little 1400cc car that slotted in just one spot below the Datsun 180B, at one stage looked like being the Datsun 1600 replacement in the Group G days.

Because of its small size, and the fact that so many Datsun parts were interchangeable from larger models, it was seen as being a real winner.

But although there were many attempts at building a successful rally car, the only one that really made the grade was Jamie Drummond's FJ20-engined car.

But Bob Watson, a  multi-Australian Champion, debuted a 2 litre-engined car described in the papers at the time as "a sports sedan". Watson's car showed lots of potential and featured such innovative features (at the time) as rose-jointed suspension and a five speed gearbox.

There were at least five "hot" 120Y's around at the time (can anyone tell us the history of any of the cars?).

- Story by Jeff Whitten. Photos from the RallySport Magazine collection.