It’s hard to believe that come December this year it will be 50 years since the running of the first London to Sydney Marathon, the event that spawned several later rallies of a similar nature. Jeff Whitten looks back on an event that captivated the world.

Although some more recent marathons were longer and sometimes tougher, the original event set standards that even today are hard to beat. It was a watershed event that excited both private and works teams, not to mention the dozen or so countries through which it ran. When entries closed early in November of 1968, 98 hopefuls had entered, a figure that was predominantly made up of privateers, plus a handful of “works” teams including Ford, BMC and Rootes. It was to be a rally that attracted the world’s media and was viewed by millions of people around the world. And Australia was to be part of the route, using some of the toughest roads on the Australian continent – the Nullabor Plain, the Flinders Ranges and the Victorian alps. The London – Sydney Marathon excited millions and saw a surprise ending after high drama on the final day. 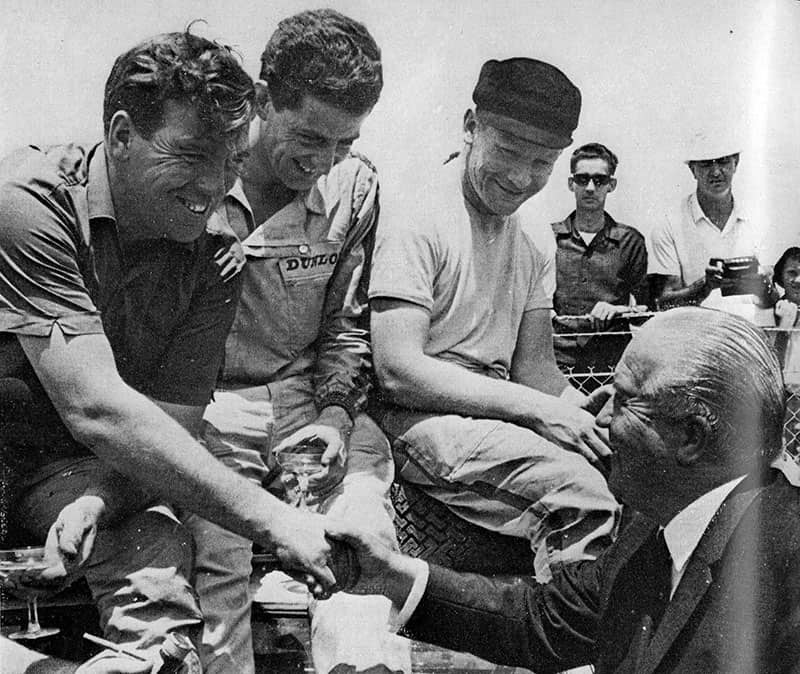 Andrew Cowan (left) accepts the congratulations of NSW premier Askin at the finish in Sydney.

The original 1968 Marathon was the result of discussions over a long lunch in London late in 1967, during a period of despondency in Britain which was caused by the devaluation of the English currency, the pound. The proprietor of the Daily Express newspaper, Sir Max Aitken, and two of his staff, Tommy Sopwith and Jocelyn Stevens, were looking for an event which their newspaper could sponsor and which would raise the spirits of the British public and boost export sales at the same time. After much discussion, they agreed on a long distance motoring event that would pass through many different countries where British engineering and enterprise could be promoted. Aitken, on behalf of the Daily Express, offered a £10,000 winner’s prize which was soon joined by a £3000 runner’s-up award and two £2000 prizes for the third-placed team, for the highest-placed Australians, which were underwritten by the Australian Daily Telegraph newspaper. The Telegraph’s proprietor, Frank Packer, saw the value in supporting this unique event and particularly in promoting the Australian leg of the event. There had been several long distance events in the past, most notably the Peking to Paris race of 1907 which covered 9,317 miles (14,994km) from Beijing to Paris, so an event as long as the 1968 LSM caught people’s attention. There was the initial presumption that the proposed event was not to be taken too seriously. However, by the time the entire route had been disclosed, the sheer magnitude of the Marathon became obvious and it fired the imagination of not just the competitors, but also motor manufacturers who could see the value in promoting their products in a very public manner. Realising that an event of this magnitude would take a long time to plan and execute, Sopwith and Stephens got stuck into initial planning in January 1968. With the wheels quickly in motion, an eight-person organizing team was established to plan a suitably challenging and navigable route from London to Sydney. 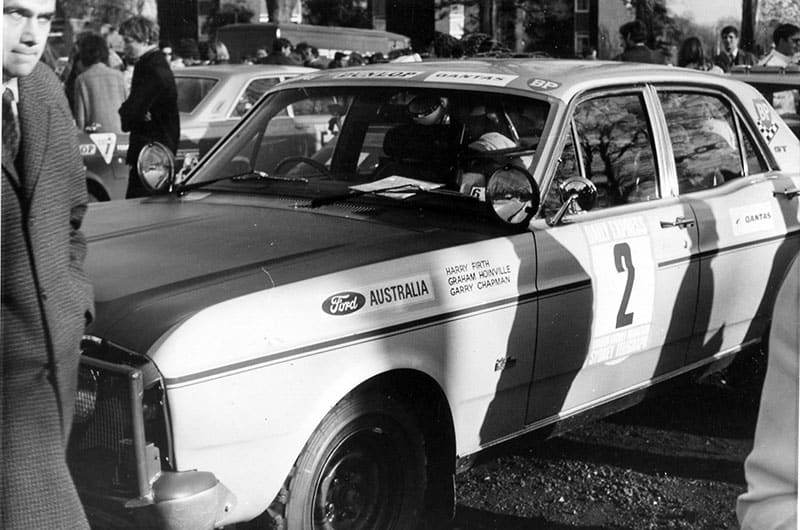 Former British racing driver, Jack Sears, was appointed organizing secretary and he and the rest of the team soon came up with a tentative route that would cover 7,000 miles (11,200km) through 11 countries in 11 days. The route chosen went via Paris, Turin in Italy, Belgrade, Istanbul, Sivas, Erzincan, Teheran, Kabul, Sarobi, Delhi, Bombay and Colombo. It offered a wide variety of road conditions that would be tough enough to provide a real challenge, but not so difficult that it was not possible to get a winner without decimating more half the field. With that part of the route chosen, the second division from Bombay to Sydney’s Warwick Farm racecourse was designed to be the sting in the tail to complete the event and get a clear winner.

One major hurdle quickly presented itself - getting cars and crews from India to Australia, which would normally involve a long sea trip. In the end the organizers were able to arrange for the use of the P&O Lines vessel, the SS Chusan, to shift the cars and crews from one continent to another, however, the Chusan’s capacity was just 72 vehicles, a figure which was initially thought to be overly generous anyway. Considering the magnitude of the event, the organizers were in no doubt that much of the almost 100-strong field would not make it to Bombay anyway. They were proved to be wrong in the end. After reaching Fremantle after nine days at sea, cars were to be impounded for two days to give crews the opportunity to catch up on sleep and prepare their vehicles for the final 2,600 mile leg across Australia. As it transpired most competitors wanted nothing more than to get back behind the wheel and hotfoot it to Sydney as soon and as quickly as they could. Those two days of inactivity, on top of the long sea trip, were somewhat of an anti-climax and crews were champing at the bit, desperate to be on the move again. 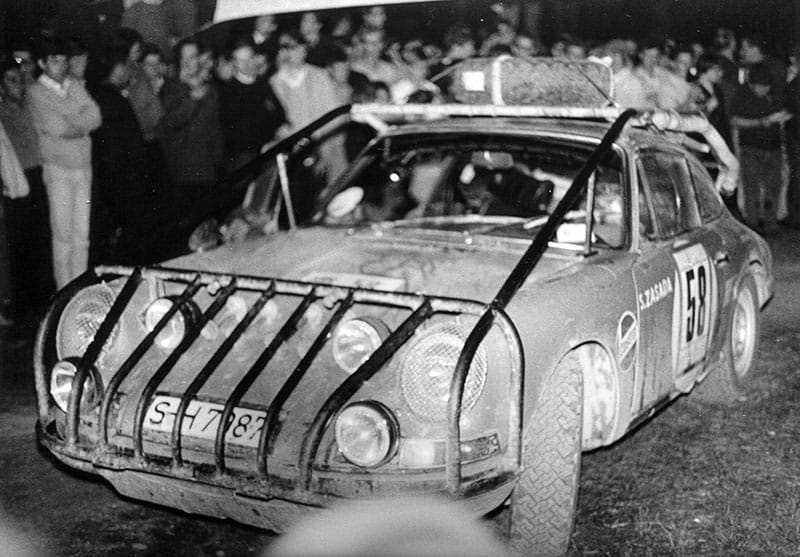 STING IN THE TAIL

The Australian leg, from Fremantle to Sydney, was expected to produce a clear winner given Australia’s rugged outback roads, just what the organizers hoped for. Leaving Perth the route was to head north west to the tiny Western Australian locality of Youanmi, from where it turned south east, through Marvel Loch and on to Lake King in South Australia. Then it was to be east to Ceduna via the Nullabor Plain, on to Quorn, into South Australia’s infamous Flinders Ranges and the rugged Brachina Gorge, before crossing the border into Menindee in NSW. If there were any competitors left at this point they would be faced with an all-stops-out blast over some of Australia’s worst, albeit picturesque, roads and forest tracks. This consisted of a blast through the Victorian Alps in the dead of night before finally finishing at Sydney after a frantic 2,600 mile race from Perth, in just 70 hours. That drive would have been almost an impossibility today, much less 50 years ago, but the organizers wanted to ensure that the Marathon was a true test of man and machine. By the time the leading crews reached Mingary in the Flinders Ranges in South Australia, crews began to experience a variety of terminal problems. Roger Clark, driving a Ford factory-entered Lotus Cortina, and the event leader at that point, experienced a bad mis-fire in the Cortina’s engine. Ford officials decided that Clark had a better chance of a good placing than his teammate, Eric Jackson (also in a Lotus Cortina), so they removed the head from Jackson’s car and fitted it to Clark’s and sent him on his way. Of the 98 cars that started from London, 61 had made it to Mingary, many of them very much worse for wear. Soon after, in the rugged Flinders Ranges, Andrew Cowan’s Hillman Hunter became stuck in the sand and had to be towed out by “Gelignite” Jack Murray. It was an act that would help shape the final results of the Marathon. 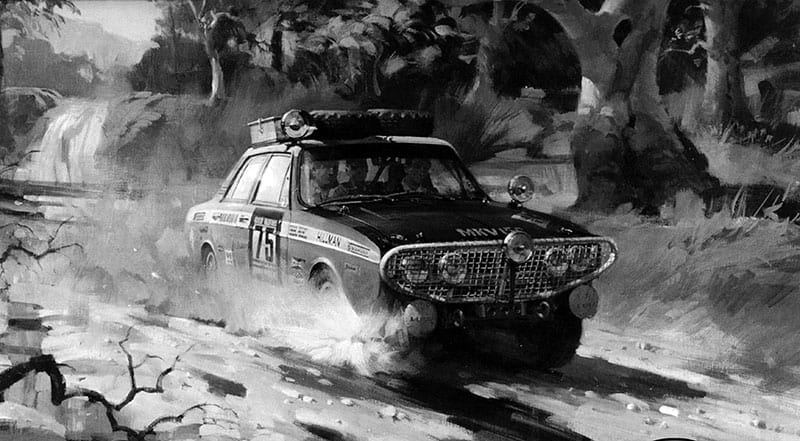 Roger Clark, his car now back in top order, was driving flat out to make up for lost time, racing through the Australian Alps, however, it wasn’t long before problems struck again when a back axle broke, and he was forced to borrow an axle from a spectator’s Cortina and fit it on the side of the road. However, by then his Marathon was over after having led the event for almost the entire distance. Clark’s misfortune elevated all the other crews to a higher finishing order and they included the likes of Paddy Hopkirk (BMC 1800), Lucien Bianchi (Citroen), and Ian Vaughan (Ford Falcon) who attacked the final competitive stage from Hindmarsh Station to Nowra flat out. Also in the frame for a good finish were Andrew Cowan, Simo Lampinen, Harry Firth and Gilbert Staeplaere and a number of others. But none of these could possibly imagine how the final dice would fall. Four miles from the Nowra control, when Jean-Claude Ogier was driving while his driver, Lucien Bianchi, slept in their Citroen, a spectator’s Mini appeared directly in front of them and coming in the opposite direction. There was no way that the two cars could avoid each other and they collided head on. Lucien Bianchi was badly injured, Ogier less so, and both cars were destroyed. Hopkirk was next on the scene, assessed the situation and returned to a spot where he had noticed some spectators before, told them what had happened and, after ensuring that the Citroen’s crew were okay, drove on to the finish. https://www.youtube.com/watch?v=6_kEPhEMSFY This dramatic turn of events saw the leaderboard immediately changed. Andrew Cowan was now the certain winner with Hopkirk, despite the time lost stopping at the crash scene, in second place in the Austin 1800 ‘Land Crab’. Unfortunately the would-be winners, Bianchi and Ogier, were robbed of a certain win due to the altercation with the Mini – their victory now lost to the Hillman Hunter of Cowan, Malkin and Coyle. It was a sad ending for what had otherwise been a relatively accident-free event, and everybody was in a somber mood as they reached the final control at Sydney’s Warwick Farm racecourse. The welcoming sight of the finish signaled the end of the world’s fastest and most publicized marathon rally ever held. A crowd estimated at 10,000 people filled almost every vantage spot as they scrambled to find a suitable viewing place to catch a glimpse of the winners and the leading competitors.
VIP Exclusive Content
Get full, exclusive access for only $6.55/month.
Subscribe Now
Already have an account? Sign in