RXAus titles to be decided in Queensland this weekend - RallySport Magazine
×

RXAus titles to be decided in Queensland this weekend 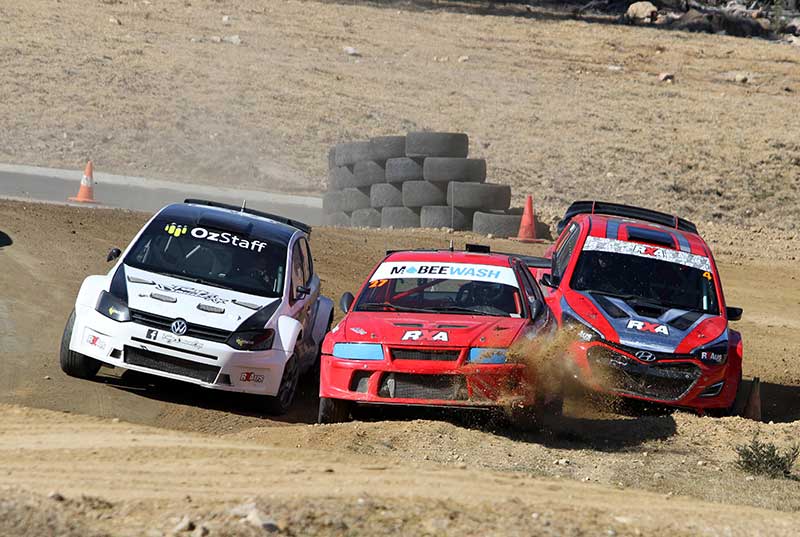 (L-R) Troy Dowel, Will Orders and Justin Dowel in action at Marulan, NSW, in round five of RXAus.

The sixth and final round of the 2017 RXAus.com.au Australian Rallycross Championship will see a title battle go down to the wire this weekend in Queensland.

The series returns to Carnell Park Raceway in Stanthorpe, Queensland, for the final round of the championship, with All-wheel-drive honours to be decided by three of the series’ standouts.

While Justin Dowel (Hyundai I30) leads by a comfortable 102 points, both teenager Troy Dowel (VW Polo) and Will Orders (Mitsubishi Lancer) remain in mathematical calculations.

However, it is likely to be the battle for second between Troy Dowel and Orders that offers the most competition, with the pair split by just eight points.

Battle hardened from competition in the Finnish RX Academy this year, Troy Dowel was on peak form last time out at Marulan and put in arguably his best performance of the season yet.

In the AWD Final the 16-year-old passed both Orders and his father, Justin Dowel, to take a stunning victory and slightly extend his margin over Orders in the AWD Championship.

Orders replied with victory in the Super Final, while Justin Dowel’s consistent performance across the weekend helped him extend his title lead.

Justin Dowel’s consistency this year has helped his title margin, one of only two drivers in the AWD class to start each of the 23 heat races this year.

The 600hp Hyundai driver has won six heat races, taken his class final once and has taken two Super final victories – including the last time out at Stanthorpe.

Orders, meanwhile, has started 22 of the 23 possible heats and won seven of them, though non-finishes have hurt his points haul.

The AWD class at Stanthorpe will include the debut of Cahal Carey’s new Mitsubishi Lancer.

The former Excel Cup runner has stepped up into the outright class this weekend ahead of a full campaign next year, showing confidence in the future of the category.

Mike Conway enters the final round of the championship with the 2WD class sealed, thanks to a string of sensational performances in his screaming Ford Escort Mk. 2.

With Aaron and Darren Windus missing from the Stanthorpe entry (due to a family wedding), Conway’s closest competition in Queensland is expected to come from VW Polo racer Scott Anderson and Troy Dowel.

Anderson was in strong form at Marulan last time out and the continued development of his Polo has seen it become more competitive each time it races.

Dowel has split his time between AWD and 2WD this season and has started a combined 44 races between the two classes; the most of any driver in the short history of RXAus.

He sits second in the 2WD Championship, while Anderson sits third.

Round 6 of the RXAus Championship will conclude a successful season for the burgeoning series.

In its inaugural year in the current format the series has attracted a total of 45 different drivers across the AWD, 2WD and Excel Cup classes – peaking at the debut of the series at Winton Raceway where more than 30 cars competed.

Building for the future, the series has seen close competition across every class.

Action gets underway at Carnell Park this Saturday at 10am, with entry free to spectators.