The Frenchman headed a Volkswagen 1-2 finish, beating Jari-Matti Latvala by 1min 12.6sec to take a three point lead in the standings over his Finnish colleague.

Thierry Neuville claimed a maiden podium for Hyundai after a dramatic finale when he twice stopped on the final road section to the León finish to top up his car’s leaking radiator – with beer provided by rally sponsor Corona at the interim podium after the final stage! 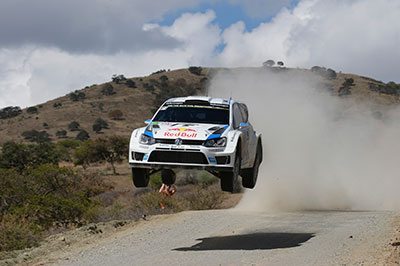 Ogier, second in the start order, minimised his time loss on Friday morning’s dirty roads before moving ahead with a stunning performance through the long El Chocolate stage in the afternoon when the tracks were cleaner.

He ended the day 26.1sec clear of Mads Ostberg and when the Norwegian retired with broken rear left suspension after hitting a bank in Saturday’s opening test, Ogier was in the clear. He reeled off five consecutive stage wins, before pacing himself to the finish, claiming fastest time in the final live TV Power Stage to earn maximum bonus points.

“It was the perfect week, a victory in the rally and the Power Stage,” said Ogier. “I came here very angry after a small mistake in Sweden and that’s the best way to restart my winning ways in the championship. Now we are looking forward to continuing like that.”

Having endured the worst of Friday’s slippery roads after starting first, Latvala’s chances of victory were slim. However, he too kept his time loss to less than expected and climbed from third to second after Ostberg’s demise.

Neuville was faultless on the first gravel rally for the i20 car. As others fell by the wayside, he kept out of trouble to climb the leaderboard and deserved his slice of luck to finish 4min 16.0sec behind Latvala after 22 stages and almost 400km of action.

Elfyn Evans claimed a career-best fourth in a Ford Fiesta RS on his first appearance in Mexico, 1min 20.7sec behind Neuville. Under strict instructions to drive for a finish, the Welshman was also flawless and was another to benefit from the troubles of others.

Martin Prokop finished fifth despite almost rolling his Fiesta RS this morning, while Mexico’s Benito Guerra delighted his home fans to take sixth on only his second outing in a WRC car.

Chris Atkinson survived a troubled weekend to finish seventh on his first appearance for Hyundai, while Mikko Hirvonen, who retired on Friday with an alternator problem, and Ostberg took eighth and ninth after restarting under Rally 2 rules. The top 10 was completed by WRC 2 winner Yuriy Protasov.

The only major casualty of today’s final leg was Kris Meeke, who broke the front right suspension on his Citroen DS3 after hitting a rock early in the final stage and ceded ninth.

Round four of the championship is Rally de Portugal on 3 - 6 April.