“We had a great event,” Markovic said.

“I love the Experts Cup. Collie is a nice area and it’s a nice place to stay overnight. The Wellington Dam stages are really nice and the event is extremely well organised. And best of all, it’s not too far from Perth!

“I was expecting it to be colder than it was. The roads were amazing and our car was loving the conditions. There were a few little wet spots and but the stages held up brilliantly considering they were used three times. It was really fun to do the night stages, it’s been a while but we relish those stages.

“Our focus is the ARC. We like Collie and it was a good opportunity to test the car and make sure everything is perfect, which it is.

“I’m not sure what other WARC events we’ll do. The Championship is close, so you never know!”

Markovic acknowledged the result of his teammate John O’Dowd who, with co-driver Kenneth Sheil, finished in second place in their 2007 Subaru Impreza WRX STI. 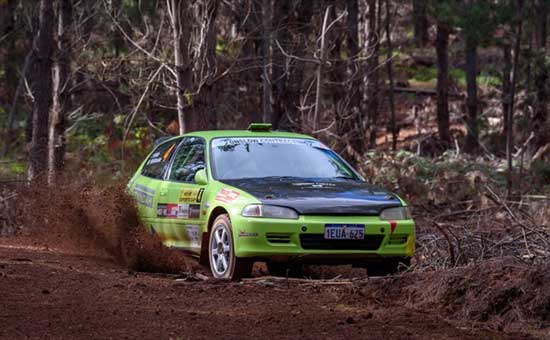 Wilde / Kirkhouse won the 2WD category of the Make Smoking History Experts Cup and finished in fourth place outright. They have held their historic lead of the WARC by 30 points from Markovic.

Wilde said he was pleased with their result.

“The car ran perfectly, we had no problems at all. The roads were amazing, probably the best I’ve seen in recent years. The sun was out and it was just a really enjoyable event,” the cheese maker from Nannup said.

“We’ve managed to just hang onto our championship lead. Brad [Markovic] and John [O’Dowd] are chipping away and getting closer … so whether we can hang onto the lead or not is another thing. With two events to go, anything could happen - fingers crossed!”

Wilde / Kirkhouse took the lead of the WARC after winning round one event the Trade Hire Kin Kin Rally, which was the first time a two-wheel drive car had a WARC event since 1994 when multiple WA State Rally Champion Bob Nicoli finished fastest in his Daihatsu Charade.

Finishing fastest in the Clubman Masters was Network-IT and Backup4me Julian Wright and Ian De Boer in their 1971 Datsun 1200 Coupe.

The Clubman Masters is a new category in 2017 for any competitor who has competed regularly in the Clubman Cup series and has held a 2WD DPI (seeding) greater than 0.8500 for more than two years as of 1st January of any year since 2007, or have been a winner of any Championship or Series.

The next round of the WARC is the Wheels On Yirrigan Kumho Tyre Kirup Stages that will be run in WA’s south west on Saturday, September 9.