Subaru ace Leigh Hopper turned out to be the driver to beat in this year's Ecolight Targa Rallysprint at Pukekohe on Sunday. But not before he and runner-up pair Glenn Inkster and Spencer Winn (Mitsubishi Evo 8) were given a run for their money by tarmac rally rookies Carl Ruiterman and ChanelleWalsh.

Ruiterman, a former D1NZ National Drifting Champion, and Walsh were a revelation in the hatchback Subaru WRX Impreza originally built for gymkhana and rallycross events, the pair winning three of the eight stages outright and ending up fifth overall despite engine failure - and a maximum time penalty - on the final stage.

The eight-stage/70km Ecolight Rallysprint was the first of three events on this year's 20th anniversary Targa year calendar, attracting over 60 entries across the three main competitive classes - Instra.com Allcomers 4WD, Instra.com Modern 2WD and Metalman Classic 2WD - and the Targa Tour which runs alongside it. 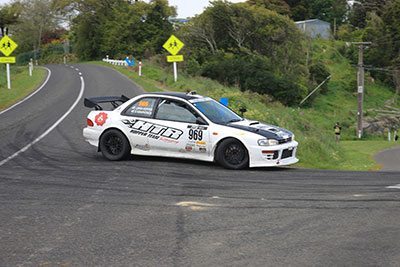 Orewa man Hopper and regular co-driver Simon Kirkpatrick got the ball rolling with wins over the Inkster and Winn, and Ruiterman and Walsh, pairings on the first and second stages. Ruiterman and Walsh got their first stage win - albeit by just one second - in the third stage, however, with Hopper second, fellow Subaru pair Allen Fretwell and co-driver Murray Preston third, Inkster and Winn struggling with a centre diff problem fourth and last year's main event Instra.com Allcomers 4WD class winners David Roger and Aidan Kelly fifth in their  Mitsubishi Evo 10.

Hopper was back in front - this time the margin was two seconds - on the fourth stage but Ruiterman and Walsh won the next two. And the pair were enjoying every minute.

"We're loving it," Ruiterman said at the lunch time service break. "With drifting the excitement is in the battles when you are up really close with somebody but here it is the trees, the drains, the gravel... you just don't know what's around the corner. It's different every time."

In their defense, Hopper was using the opportunity afforded by the single-day, multi-stage format of the event to put different people  - including his future son-in-law and his bank manager - in the co-driver's seat. And it was the first time Inkster had driven the latest wide-body version of his new Mitsubishi Evo 8 in anger.

But both admitted they were not exactly hanging around.

'We weren't leaving much to spare, put it that way," Hopper confirmed.

With Ruiterman and Walsh back in third in the penultimate stage and out for good in the final - the latter won this time by Inkster and Winn from Hopper and co-driver, with Karl Douglas and Damian Van Heusen (Subaru Impreza WRX) third and Rogers and Kelly fourth, the final order - overall and in the Instra.com Allcomers 4WD class - was Hopper and Kirkpatrick first, Inkster and Winn second and Rogers and Kelly third.

Kirk-Burnnand and Hay topped their class time sheets in five of the eight stages but when the stage times were tallied up their winning margin was the narrowest - just two seconds separating them from the uprated V8-powered Datsun 240Z of the class winners of the other three stages, Auckland veterans Allan Lewis and Colin Cole. 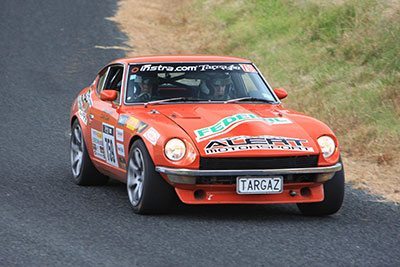 Former gravel rally ace Ross Clarke driving a Neil Allport-built Toyota Celica claimed a decisive class win in the opening stage from Tony and Jo Butler in their newly fuel-injected V8-engined Cheetah two-seater sportscar and Carl Kirk-Burnnand and co-driver Sam Gordon in their familiar BMW 325i. But Hare and Simpson claimed the first of their five (class wins) in the second from Porsche 911 pair Sean Seamer and Carl Robertson, and the Butlers with Ross Clarke back in eighth after grazing a bank.

Bar a minor alternator issue Hare had a dream run in his new/old Rover, one which could not be more different from the late model BMW Mini he has been seen in up until now.

"We'd repaired the Mini (Hare rolled it in the main Targa event last year)," he explained, "but we still had to do some bits and pieces so I thought I might as well do something with the Rover. It's obviously a very different car to drive, yet pace-wise the two (the hi-tech late model Mini and the basic V8-engined Rover) are very similar."

Hare took his time settling in on the first stage - finishing seventh - but won three of the next five from either the Butlers or Ross Clarke before sealing class victory with runner-up spot to the Butlers.

"Yes, it's been great," said Chris afterwards. "This is the kind of event you can have a lot of fun in with a car like ours."

The Ecolight Targa Sprint was the first of three events on the Targa calendar in this, the 20th anniversary year of Targa competition in this country. The second is the three-day Targa North Island from Auckland to Rotorua in May, the third the six-day Targa South Island from Christchurch to Queenstown in late October and early November.