Asia-Pacific Rally Championship driver, Mike Young, reports on his trip to Rally Germany to check out the European rally scene.

In the week following Malaysian Rally I had the opportunity to go to WRC Rally Germany to check out the rally scene in Europe. Given the cheap flights out of Singapore and an event where there was 17 WRC cars entered, a similar number of R5s and a big range of supporting classes, I was really looking forward to my first visit to Europe in 10 years.

Mike Young (r) with Hayden Paddon and Malcolm Read.Flying into in Frankfurt early Tuesday morning, I met up with my Dad (Brian Young) who was attending the event as a journalist, and after picking up a rental car, headed to Trier, the oldest city in Germany and where the WRC event is based. It’s in a really beautiful area in South Eastern Germany, part of the Moselle River Valley with steep hillsides covered in vineyards, and very different to the oil palm plantations we’d come from in Malaysia.

Arriving at the WRC service-park in Trier was unbelievable…. the service park is huge!! The teams all have massive areas and Hyundai even has its own three-storey building. It’s here that I met up with my APRC co-driver, Malcolm Read, who was working at the event with Hyundai driver Hayden Paddon. Hayden wasn’t driving in Germany, however he did do recce. Of course I took the opportunity to have a photo with them both in the Hyundai service area.

From the Hyundai garage we moved to Opel where we had an invitation to meet Frederic Elsner, Project Manager for ADAC and the Opel Adam series.  It was a very busy weekend for Frederic as his company, ADAC, is the main sponsor of Rally Germany, so we were lucky he could spare some time with us.

There are 22 mostly German and European drivers, including Thierry Neuville’s brother Yannick, all in identical cars, all very competitive and with very close racing. The Adam Opel looks small, but on the stages they certainly look to have plenty of power and handle and brake really well. This would be a great championship to get European tarmac experience at a reasonable price.

From the Opel Adam series we moved to the Drive DMack Ford Fiestas where M-Sport’s Andrew Wheatley spent a good two hours talking with us and explaining every aspect of this championship. The Dmack Fiesta R2 series is five WRC rallies - Portugal, Finland, Poland, Germany and Spain, providing a great range of gravel and tarmac on some of the best European events.  There is a selection process to ensure drivers and co-drivers have sufficient previous experience to take on this series and to get the full value from the 125,000 Euros it costs to compete in the five events. 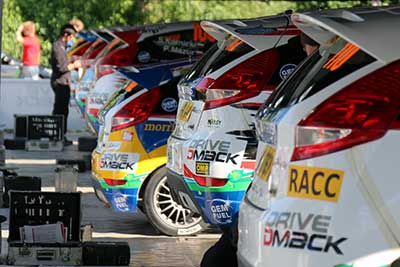 There’s a few extras to budget for too, including the cost of recce, rally accommodation/food and the cost of any damage. It is a very well supported series with the likes of veteran co-driver Phil Short on hand to help with any organisational issues, a very good international TV/media package, hospitality, and even its own weather expert to help with tyre choice. Tyre management is a big factor in the series, with the numbers limited to just 14 tyres per event.

With one round to go in 2014, Estonian Sander Parn leads the series by 29 points from UK driver Tom Cave. And the prize?? Six WRC events in an R5 M-Sport Fiesta!! That would be a dream come true.

WRC Rally Germany was also the launch of the new Toyota GT86 CS-R3 and it was great to meet one of the engineers involved in the project, Fredy Nowak. What made our meeting extra special was that Fredy was also involved with the creating the Toyota Yaris R1A, a car similar to the one I drove in the 2013 APRC.

When we were introduced Fredy knew everything about what we did last year.  “Of course I know you Michael, the Yaris was my project, I followed every event!” Fredy has worked on the APRC too, in 2003 and 2004 he was Armin Kremer’s engineer when the German driver drove for Team MRF - and became the 2003 APRC Drivers champion.

There were plenty of other meetings, however we kept the whole of Friday free to see some action. We choose the Moselland stage and stayed there the whole day as it’s a magic location in the vineyards above the Moselle River. 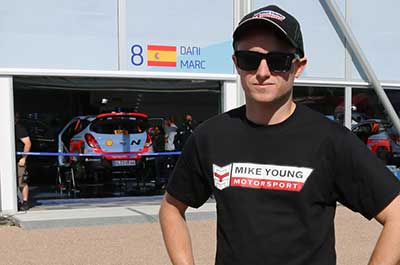 One of the best of pieces advice I got was to drive through the stages after the cars had been through to see the state of the roads after 200 cars, and to see first hand what the conditions could be like for competitors in the lower classes. While we never had the time to do that, it was interesting watching the surface deteriorate through the day at Moselland.

It started as clean smooth tarmac, but even after just one car there was gravel pulled onto the road. After 10 cars there were corners as slippery as a skating rink with ball-bearings on the top, and after 100 cars it was a mess. In most places though there was a clean line, just don’t get off it!! That was a fantastic day and one I’ll never forget. I hope I get to drive that stage one day.

I left Germany with plenty of knew ideas and maybe a few dreams, but one thing I do know is that the Asia-Pacific Rally Championship is a good place to be right now, with lots of opportunities, and hopefully we can attract a manufacturer to our championship, rather than joining theirs. Let’s see what the future brings.