2017 Nicky Grist Stages winner Fredrik Ahlin in his Skoda.Ahlin inherited the lead at half distance when Fiesta R5 of Osian Pryce stopped in mid-stage with a sensor failure.

Pryce took full advantage of starting first car on the road at one minute intervals in hot, dry and very dusty conditions, gaining a half minute lead over Ahlin, before the organisers started running the top cars at two-minute intervals.

Ahlin immediately started catching Pryce and was 8.1 seconds behind when Pryce stopped.

This mixed surfaced event in mid Wales started with gravel stages before moving to asphalt for Day 2. 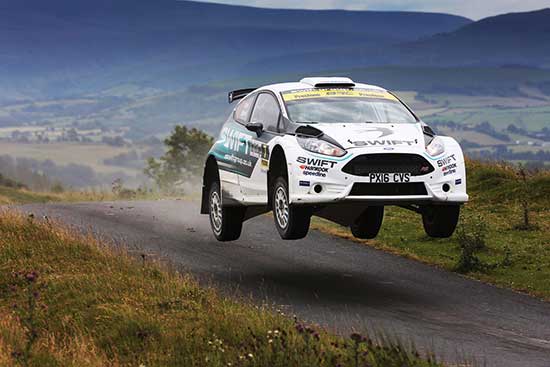 Matt Edwards took second place in his Ford Fiesta.This was Ahlin’s third BRC win of the season and he now moves ahead of Pryce to lead the series.

Artificial chicanes featured prominently.  It is thought that Pryce’s car stopped as a result of touching a chicane straw bale, for which he was given a five second penalty.

Keith Cronin, BRC winner at Ypres, had initially been lying second, but retired off the road when fourth.

The category for Junior drivers at the wheel of R2 cars was closely fought, being led in turn by Meirion Evans (Peugeot),  Oscar Solberg (who retired his Fiesta off the road), and James Williams (Fiesta), before finally Callum Devine (Opel) went ahead. 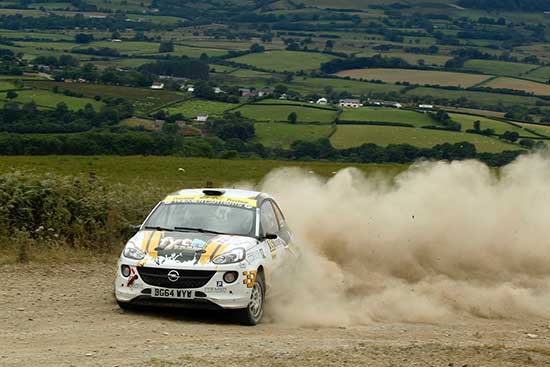 The leading Junior driver was Callum Devine in an Opel Adam. (Photos: BRC promoters)Gravel rallying has now finished for the BRC this year, the two remaining championship events (Ulster and Manx) are both asphalt rallies.