Tour Review – Rally Australia: what could be better?

Monday, 8th of September
With a countdown on my phone, I was well and truly ready to leave. Nan and Pa had taken Dad’s old camera up for me, simply because I didn't want to have to take it on the plane. I had the GoPro, batteries charged, and with a new pole mount that I had made, I was set to go.

This is when the wait started. We had to wait until 3:20 until our next plane. The wait included lots of use of free wifi, and a massage on one of the massage chairs.

Finally it was time to board. We got to Coffs Harbour safely, and after a trip to the Media Centre, to get our media stickers, a visit to the officials sign-on area to get our official passes, we were at Opal Cove and had settled into our room. I was very happy, because I got an Officials Pass.

Matthew Whitten with M-Sport's Malcolm Wilson and Mikko Hirvonen.Wednesday, 10th of September
For Rally Australia standards, we had a sleep in. I woke up at 7:30 and was ready for action. Dad, Pa and I went out to the shakedown stage, just to confirm where we were going, because there was a late change on the whereabouts of the stage.

After Carolyn had a few trips to the airport, picked up all the people we needed to pick up, and had some time to ourselves. We were off at 5:30, down to the Horizons Restaurant for the welcome dinner. With Dean Herridge being our MC, and having Mikko Hirvonen and Malcolm Wilson as our special guests, we were all eager to hear some stories from Mikko and Malcolm.

We got to ask some questions, and the favourite was when Richard Palmer asked Malcolm about when he drove on three wheels in the 1983 2GO Rally. Mikko was asked about his car fire earlier in the year. He told the story about it, and when he and Malcolm left, Dean told a story about when he had a car fire driving for Subaru China.

Everyone liked that story because there was plenty of humour in it. His boss said he was clever because he parked outside the fire station when it went up in flames.

Thursday, 11th of September
It was the first early start of the tour. Up at 5:30, and leaving Opal Cove at 6:30, we were off to shakedown. Shakedown was a 2.5km stage, with a few little jumps and lots of interesting corners. We were on the first real corner. 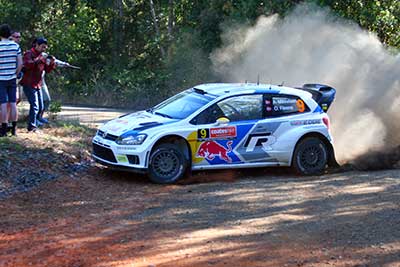 Andreas Mikkelsen puts his VW Polo through its paces at the shakedown.They started off, then a short left hander and then a hairpin right, then about 100 meters down the road a small jump, and then another 50 meters down the road was another jump. There was lots of rocks sprayed at the people on the outside, as well as some good video and camera footage. Meeke was fastest, followed by Ostberg, and then Latvala. Back to the hotel it was, and we had about an hour to ourselves.

We were back on the bus again at 12:00. We were off to have lunch at Park Beach Plaza. During the time I feasted my eyes on a few model cars. At 1:30 we were off to the service park for a tour of the M-Sport service area. This was loved by the RSM crowd.

We then had about an hour of free time to have a good look at all the service crews and their home away from home. At 3:30 we were back in the bus and off to the rally show. Lots of people got signatures and photos with the WRC drivers. At 7:30 we were back at the hotel.

We were all surprisingly tired, but this didn't stop us from being motivated for the first stage of the rally.

Friday, 12th of September
Again, we were off at 6:30. Off to the RallySport Mag exclusive jumps on the Newry stage. We got led into the stage, and then there was a long wait until the first car. Many of us realised that there had been a slight landscape change to the jumps.

The first one had been flattened out, so the cars got very little air on the jump, but the second one was okay, giving us only a little bit of air to capture through our camera lens. After all the cars were through, it was a quick stop in Urunga for an ice cream and toilet break, and then back out to the next spot, which was on the same stage, but closer to the start. This wasn't a bad spot, but the silly media camera men kept getting in the way of our photos. 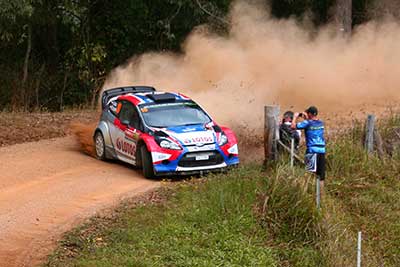 Robert Kubica attacks the Nambucca 1 stage in his Ford Fiesta.After about 15 cars, we were off, yet again. This time, back to the super special stage, which was being held near the service park. We had some trouble getting in, because our ‘red dots’ on our rally passes were not valid grandstand tickets (or so the security guys thought). After a few words with important people, we were free to go into the grandstand. Our spot was right in front a jump.

The photos were only good for people with massive flashes, and there was about one or two of us that had them.

Saturday, 13th of September
At 6:30 sharp again, Gary the bus driver was waiting for us at Opal Cove reception. We had to go to further south than Urunga, for the Nambucca stage. We were going into a spectator point about 45km into a 50km stage. There was plenty of good photos taken.

Some drivers were sideways well before the corner. After the classics, we were back on the bus, off to the Bowraville Racecourse for lunch. Then we went into Bowraville for an ice-cream. We then got led into the Valla stage and that was when the wait started.

We had nearly two hours to wait until the first car. Most of us lay down on our jackets and tried to have a snooze. When the first car came, we were over the waiting, but we got covered in dust. 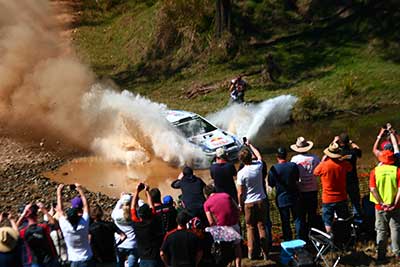 The Shipmans watersplash provided plenty of action for fans.Sunday, 14th of September
After another 5:30 wake up, we were off to the exclusive RallySport Mag corner on the Shipmans stage. They came down a small hill, then a left hand corner where the cars were in a full on slide. I thought that Atkinson, Kubica, Paddon, Ogier and Meeke were in the biggest slides, and provided the best photo opportunities.

After the classics, we went to the water splash on the Shipmans stage. As this was a general spectator point, we couldn't get very close to the action, but with a bigger lens on the camera, I got some perfect shots of the cars putting water everywhere.

But, after only 11 cars, we were back in the bus, and going to another RSM exclusive spot, this time on the Wedding Bells stage. They came over a hill, did a short left hander, then disappeared into the trees for about 5 seconds, then came out, through a dip, and then a left hander that had lots of big rocks on the outside. After the WRC cars we got on the bus and were going to the podium presentations. The presentations were massive, because it was Volkswagen’s first ever 1, 2, and 3 placings. They also secured the manufacturers championship.

There was lots of champagne sprayed and at one stage there was about 7 people on the roof of the VW. 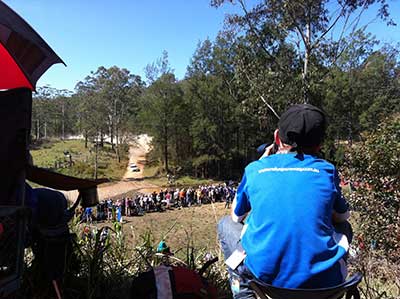 Matthew captures the action of the Shipmans 2 stage.Monday, 15th of September
I woke up thinking that it was at least 8:30. But to my disappointment, I realised that it was only 6:50. After getting up, and cleaning up a little bit of stuff in the room, we were off for breakky.
This was our first hotel cooked breakfast. For me, this consisted of a few hash browns, lots of watermelon, a couple of sausages and a glass of orange juice. It was an all you can eat breakky, so I was very full after it.
While eating breakky, I noticed that some of the big driver banners had been taken away. This put an idea in my mind. I went up to the officials desk, and asked whether I could take one home.
They said to ask some other person, and the other person said I had to ask the rally organiser, David Catchpole. So off I was, to find David. He told me I could take one, but the choice was to see which driver I should take.
I was leaning towards Jari-Mati Latvala, but one of the officials that was helping me get it down said that I should get Robert Kubica, because he was down having breakfast, and I could get him to sign it. I thought that it was a great idea, so that’s what I did. Now Robert is hanging from the picture rail in my room.
When we got to the airport, we were lining up to check in, and we were talking to Ott Tanak about his crash, when his next rally was and stuff like that. He said that he had a blackout and didn't remember anything from his crash.
While we were waiting to put our bags through the x-ray machine, we were talking to Elfyn Evans. He said that he was happy with his result, because this year is just a learning year for him,
While waiting for the plane, I went around and found a few people to get autographs from. I got Jari Kettoma and his co-driver Kaj Lindstrom. I got Nasser Al-Attiyah, and he also gave me a signed Michelin hat. On the plane, Ott Tanak sat two rows behind us and on the other side.

In Review
In review, I think that this was the best RallySport Mag tour I have been on. There were plenty of good spots, good for photos, videos and even for just watching. The people on the tour were great, with lots of regulars and a few newcomers.

I would like to thank Gary and Lardy for being great bus drivers and getting us where we needed, Opal Cove, for providing the lunches each day, but most of all, Peter and Carolyn. They put mountains of work into the tour, juggling which spots we could and couldn't go to.

Photos and video by Matthew Whitten