Toyota, the world’s biggest motor manufacturer, delivered a huge boost to the FIA World Rally Championship (WRC) and joy for an army of loyal Australian supporters when it announced today it will return to the competition in 2017.

Toyota Motor Corporation president Akio Toyoda ended months of speculation at a media conference in Tokyo, where its Yaris WRC car made its public debut.

The new Toyota Yaris WRC (right) with the 1990s Corolla WRC.Toyota becomes the fifth manufacturer in the WRC – which includes Rally Australia on its 13-round annual calendar - joining Volkswagen, Hyundai, Citroen and Ford, which is represented by an independent team.

Makes committed to the WRC now comprise the most powerful manufacturer line-up in a global motorsport series. Ranked number two in sales, Volkswagen joined the WRC in 2013 and fifth-ranked Hyundai joined in 2014, alongside long-term competitors Ford (number three in the world) and Citroen.

On the WRC sidelines since 1999, Toyota will run its new program from the established Toyota Motorsport base in Cologne, Germany, and has hired French drivers Stephane Sarazin and Eric Camilli to develop the 1.6 litre Yaris over the next two seasons.

It will aim to grow its substantial record in rally sport, which includes four drivers’ and three manufacturers’ world titles with legendary pilots such as Carlos Sainz and Juha Kankkunen.

Kankkunen won Rally Australia in 1989 and 1993 driving a Toyota Celica, while in the Australian Rally Championship the Toyota team run by Neal Bates took six drivers’ titles between 1993 and 2008 and continues to draw a big following for his 1980 Toyota Celica world rally car in the Classic series.

Speculation about Toyota’s return was boosted when amateur racer Akio Toyoda sampled a rally-prepared Toyota 86 on a section of the Rally Finland course last August and, in secrecy, on the Wedding Bells stage of Coates Hire Rally Australia in September. His co-driver on both occasions was four-time world champion driver Tommi Mäkinen of Finland. 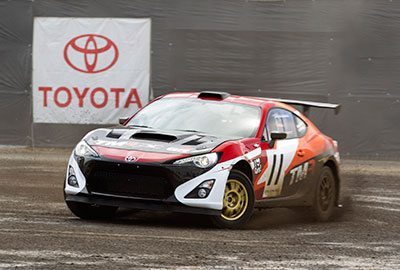 Akio Toyoda and Tommi Mäkinen tested the Toyota 86 on Rally Australia's Wedding Bells stage last September. Rally Australia’s Ben Rainsford hailed Toyota’s return as fantastic news for the event, which will run for the 24th time on 10-13 September this year, and for the WRC.

“Toyota has been one of the most successful makes and long-term supporters in Australian rallying and has a big popular following even today for the classic 1980 Toyota Celica world rally car of Neal Bates,” Mr Rainsford said.

“Last September we were proud to facilitate a private experience on our Wedding Bells stage in a Toyota 86 for Akio Toyoda and the four-time world champion Tommi Mäkinen, so perhaps in a very small way we have helped pave the way for this news.

“The decision further strengthens the status of the WRC as the pre-eminent showcase for the world's biggest automotive brands and will bring significant extra commercial momentum to the sport here and internationally.”

WRC Promoter’s Olivier Ciesla said: “Toyota has a long and distinguished history in motorsport, particularly in world rallying, and we’re delighted to welcome one of the automobile industry’s giants back to WRC.

“Toyota’s announcement brings a fifth manufacturer into WRC, including three of the world’s five biggest-selling auto companies. The last season in which so many manufacturers were represented was 2006.

“It’s exciting to see that in addition to the manufacturers already competing in the championship, others are becoming aware of the benefits that engagement in WRC will bring to their business.

“There is a clear link between World Rally Cars and the vehicles we drive in the street and that’s a powerful marketing tool. WRC is a truly authentic sport and this positively translates to a sympathetic image for the brands involved.

“With a global annual TV audience of 800 million viewers, spread across the year from January to November, the WRC provides an excellent return on a company’s investment and we look forward to seeing Toyota back on the special stages in two years’ time.”