Swedish star Stig Blomqvist burst out laughing when he heard that Hannu Mikkola had signed to drive for Audi in the 1981 rally season. He wasn't laughing for long ..... * * * * * * "My career changed with a telephone call from the Swedish Audi importers. My rally world until that time had been mostly dedicated to work with Saab. They had given me an international identity, even though the cars had been restricted to the front-wheel drive saloon cars they made. I had a long and successful time with them. I had joined the official team in 1968, by 1971 I had my first major success on the Swedish Rally, then followed later that year on the 1000 Lakes in Finland. There had been some breaks. For example, in 1978 I was invited to drive a Stratos on the Swedish (Saab had commercial links at that time with Lancia), and of course in 1979 I was able to score the first world championship win for turbocharged cars, with the Saab 99 Turbo. 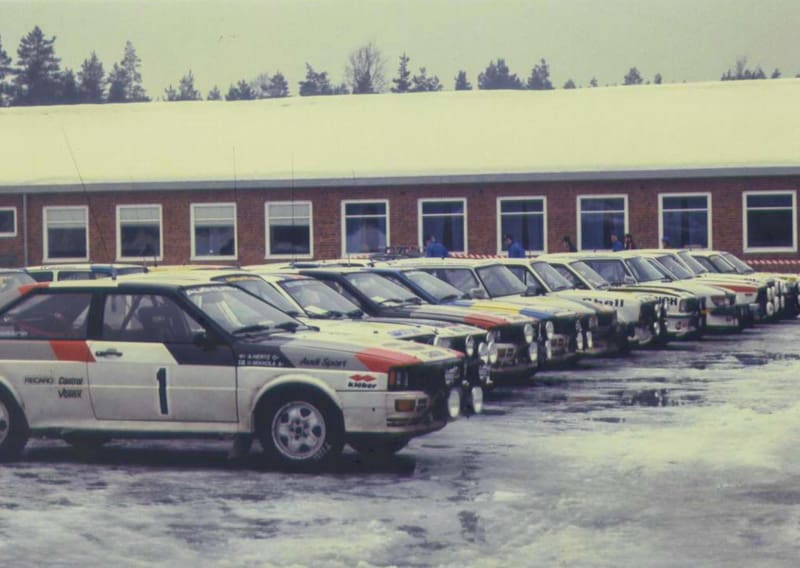 The Audi Quattro was the dominant car on the 1982 Swedish Rally. Photo: Martin Holmes

In 1981 I was asked to drive events for Talbot, who that year became World Rally Champions, for the first time in an orthodox type of car, the Sunbeam Lotus. But apart from that, I was really ready for a change. Suddenly it happened. That telephone call led to my entering the Swedish in a Quattro, like the car which had dominated the event in the hands of Hannu Mikkola the previous year. I was happy to accept, but I had no expectations that this would give me any possible chance to win. The deal was that the factory would rebuild another works car for me to use on this event and also the Swedish championship rallies. The car would be in the best possible condition for the Swedish Rally itself, which would have meant up to date transmission and everything like that. We tried out the car before the event and it was working perfectly, but then halfway through the first stage it all went wrong. 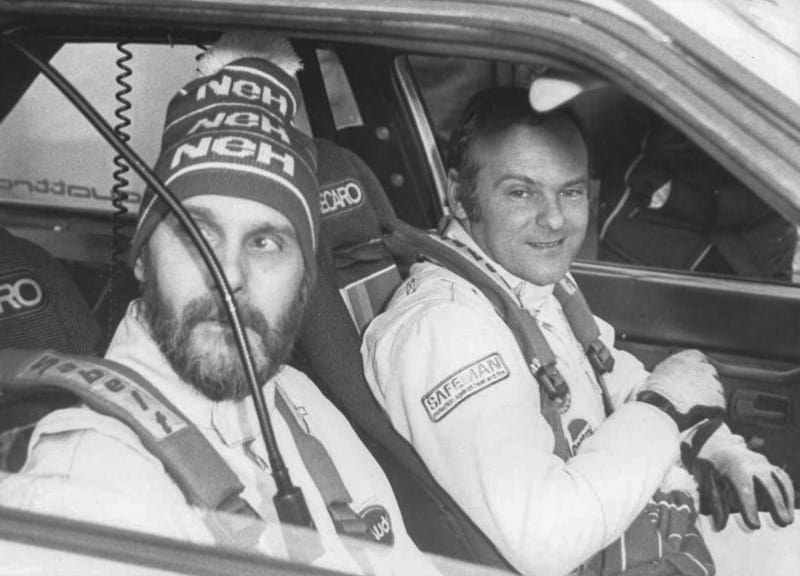 The engine stopped without any reason for about three minutes. I did everything to check what was wrong, but it was to no avail. We put everything back together again and it fired up without problem. Actually, the problem never recurred for the whole year afterwards while we still had it. I now had an impossible mission to win the rally! The mysteriously stopped engine was not my only problem, but later I was given a penalty for a jump start and that caused no end of a rumpus behind the scenes. I had been a very close friend of the people who ran the forests and on their own accord they were very angry with the time keepers. In the arguments afterwards it got to the point where the foresters told the club that if they could not run rallies more efficiently, they would not be given permission to use the forest roads again... I don't recall why this problem happened. 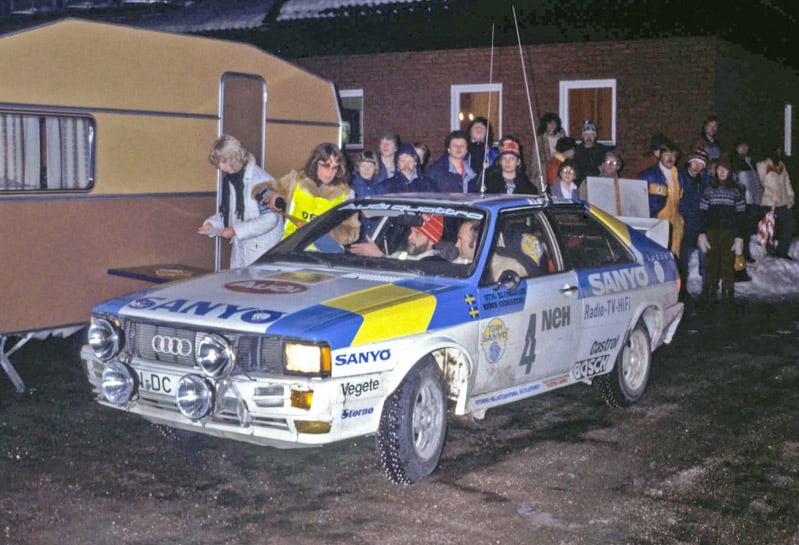 For sure I started the stage when the flag was lifted from the windscreen, not before. I later heard that the report of the jump start did not come from the starter, but from the person sitting in the time control car! Early the next day we had got up to second place behind the works Audi of Hannu Mikkola and for me that was the job effectively over. There was no chance against someone like Hannu to win the rally, and what was more, of being allowed to win the rally with a privately entered car against him. It had also specifically been agreed beforehand that I would not fight with a team member because they were fighting hard for the world drivers championship (the event did not qualify for the makes' series). This meant another tricky situation, because Michele Mouton in the other works car was coming up fast by the end of the second day into third position, and maybe she would have enjoyed being second instead of me! Anyway, Audis were 1, 2, 3 before the final day began. 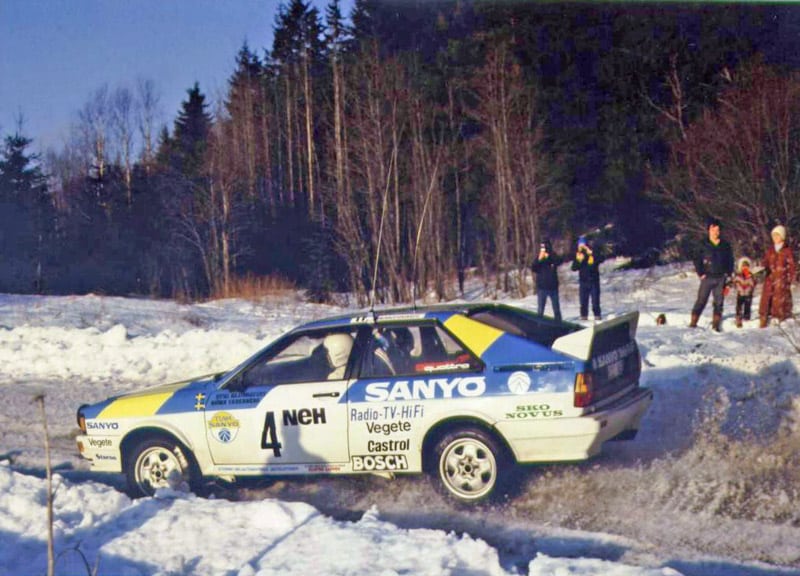 I will never forget what happened on stage 21, the longest stage of the event, with only four short stages to follow afterwards. Firstly, we found Hannu Mikkola in a ditch. I could not believe it, he had been leading by quite a good margin at the time, 131 seconds. We got to the end of the stage, and the team radio was going mad. Reports came through that Michele had gone off the road as well, in the same place as Hannu! I discussed all this with my co-driver, Bjorn 'Captain' Cederberg, and he recommended that we should just be as quiet as we could, and we cruised into the service point, leading the rally and we got the full story. It seemed that Hannu had pretty much got the car back on the road again when Michele arrived and pushed him back into the hole from which he had just escaped, and ended up on the other side of the road. 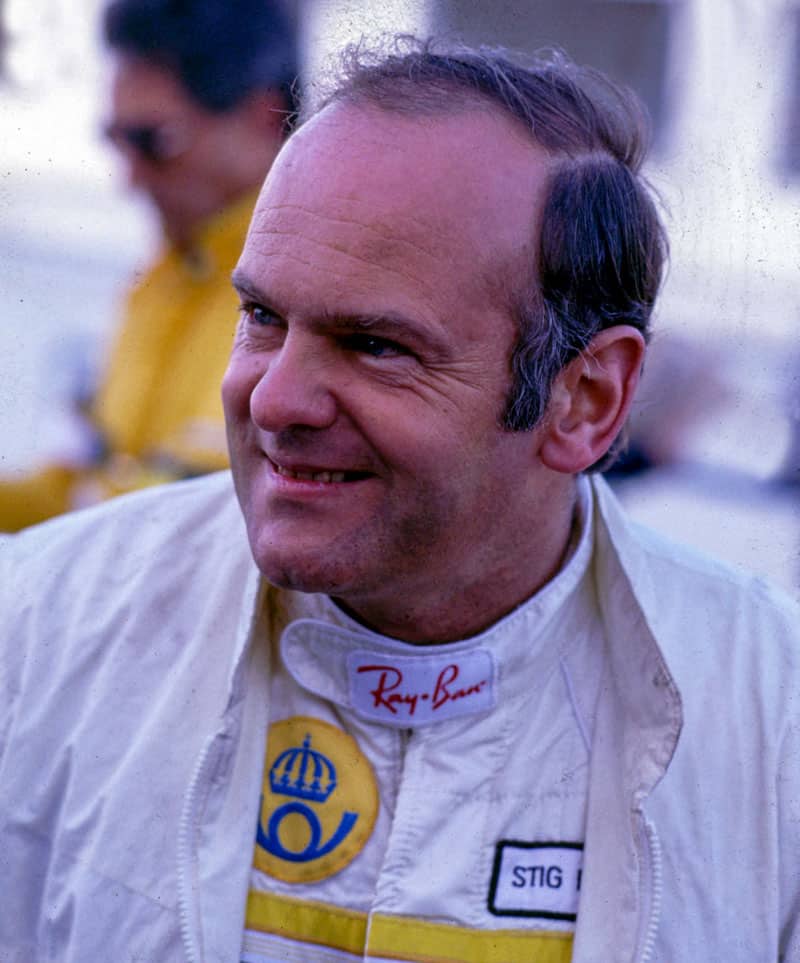 The Audi Quattro must have been the most impressive car in its day that I ever drove. You could not believe what you could do with the four-wheel drive. The first time I drove a Quattro was down in Ingolstadt when it was slushy. The car accelerated away like it was on dry tarmac. The engine was powerful but the traction was the special sensation. The problem with the Quattro was when you went to drive a two-wheel drive car afterwards! The strange thing was that the four-wheel drive did not stop with the same extraordinary effect as when it accelerated. My previous experience with front-wheel drive rally cars helped a lot when I came to Audi. Hannu Mikkola, remember, had driven rear-wheel drive cars all his career. The Quattro car started as a front-wheel drive car to which was added a propshaft and a differential in the rear. There was nothing high tech about the transmission, it was just four-wheel drive. 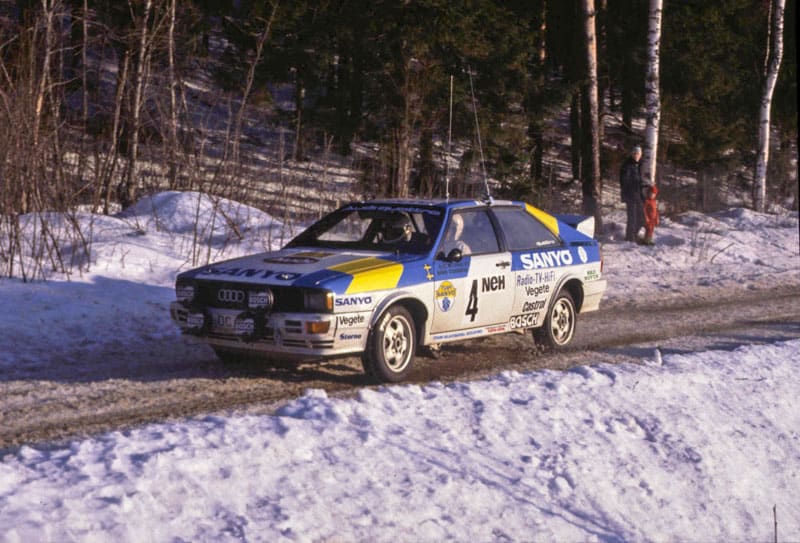 The Quattro on snow was uncatchable in Sweden. Photo: Martin Holmes

I had used the left foot for braking all my career and that helped get the most out of the Quattro. I think it was the most remarkable car in rallying in its day. It took a long time before other manufacturers reached Audi's standard. It was strange the way I first became involved with Audi. I remember once Hannu asked if he could drive my Saab Turbo, he said he wanted to see what a turbo car felt like. Hannu would not tell me what it was all about, but his co-driver Arne Hertz, who used to be my co-driver, made me promise not to laugh, and not to tell anyone. He then said they were going to drive an Audi next year! I burst out laughing! I was working as an ice note crew member at Monte Carlo when the Audi team hit the headlines, beating everyone by a minute a stage - and on Kleber tyres at that! Kleber tyres. Well that was another matter. The company policy agreed to use them because the specialist tyres from companies like Michelin were not necessary. So, when we came along, with a Michelin contract and wanted to run with them, on the occasion when we were running against the works cars, there was yet another major argument. But that was life at Audi. Never a dull moment." * As told to Martin Holmes at Villa Carlos Paz, December 1999
VIP Exclusive Content
Get full, exclusive access for only $6.55/month.
Subscribe Now
Already have an account? Sign in