Vatanen had “such a great weekend” at Nat Cap Rally

Earlier this month the Australian rally community welcomed rally legend Ari Vatanen back to Canberra, an event near to his heart having dueled in 1980 with Greg Carr at the Castrol Rally.

Vatanen, the 1981 World Rally Champion, was guest of honour at the Australian Rally Hall of Fame Gala dinner, and spent the remainder of the weekend out and about meeting officials, fans and spectators at the opening Round of the ECB ARC.

“It was such a great weekend to say the least,” said Ari of his time back in Australia. “I felt so welcome to be back in Canberra! It was a great rally, the weather was very nice, the people all so friendly – all the elements were there.”

It had been more than thirty years since Vatanen had visited Canberra and he was thoroughly impressed with the National Capital. 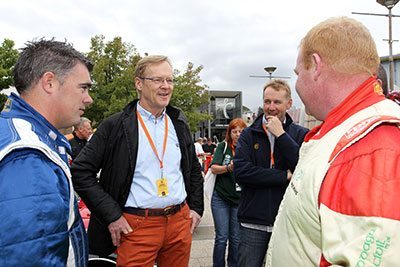 Ari Vatanen chats to competitors at the National Capital Rally in Canberra earlier this month.“Canberra looks like a big garden town. I keep looking for downtown and I have not found it, I don’t think there is one. It’s a very beautiful town and I imagine people’s quality of life is very good here, no wonder it has grown so much in more than 30 years.”

While some motorsport celebrities, especially a former World Champion, might shy away from the rigors of public attention, Vatanen threw himself into every situation possible over the weekend and where ever he went he was happy to take the time to speak to anyone and everyone.

As a former top line competitor, and now a father helping his own son into the world of rallying, Vatanen spoke passionately about the challenges facing rallying on a global scale.

“Like in any other country I see rallying is very expensive, and like a lot of other countries it is not an entry list of 150 or more cars here in Canberra. At least as far as competence and professionalism is concerned the guys here definitely know what they are doing.”

“I think rallying needs to find a way, and this is the same around the World, to support all the elements that make up our sport, not just focusing on one particular element,” he continued.

“Also I believe strongly in cars that are say universal, that can be taken to any countries Championship and be able to run. There still are far too many national rules and regulations that serve nothing but to stop competitors.”

So of the ECB ARC’s decision to make two-wheel drive the premier category Vatanen said; “There isn’t one single answer to make rallying more affordable. I understand why the Australian Championship made this decision, to go two-wheel drive. I think it’s a wise move, in the long term maybe we see more of this happening around the world.”

“We have to see this big motorsport family that we help and support each other, that we can go across these artificial man made borders. Whatever decisions we make we always need to question that it is the best decision for everyone.”