Gravel for the first time, high altitudes, and a welcome problem – Volkswagen face a special challenge when they line up at the Rally Mexico (06–09 March). The three Volkswagen works duos will feel gravel under their Polo R WRCs for the first time this season at the third round of the FIA World Rally Championship (WRC).

The teams swap the winter of Monte Carlo and Sweden for the summer temperatures of Mexico. And then there is a geographic anomaly on the WRC calendar: with altitudes on the special stages ranging from 1,832 metres above sea level to a staggering 2,781 metres, the World Championship leaders will quite literally be hoping to race off into thin air at the head of the field. 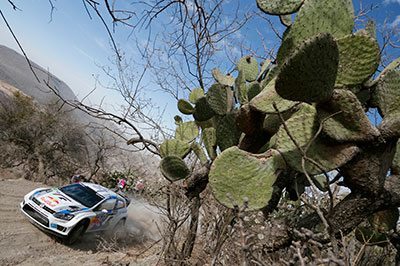 VW have looked nearly unbeatable so far in this year's WRC.The engines lose up to 30 per cent of their performance in these conditions. And Jari-Matti Latvala/Miikka Anttila (FIN/FIN) as World Championship leaders, Sébastien Ogier/Julien Ingrassia (F/F) in second place, and Andreas Mikkelsen/Mikko Markkula (N/FIN) in fourth place in the World Championship find themselves confronted by another problem. Their positions in the World Championship standings mean they have the dubious honour of being first out onto the route. As such, they will take on the role of “street sweepers” in León, clearing the special stages of loose gravel – the scourge of good stage times – for the following cars.

“While the focus was more on driving ability at the first two WRC rallies of the year in Monte Carlo and Sweden, the material will be put to a bigger test this time around in Mexico,” said Volkswagen Motorsport Director Jost Capito. “Adjusting the engine management system to cope with the extreme altitude is a fiddly job for the engineers, who must find the right balance between reliability and losing as little performance as possible. Furthermore, our driver/co-driver pairings have a Herculean task ahead of them. Their positions at the top of the World Championship mean they may – or must – open the route. Despite this huge handicap, I firmly believe that Jari-Matti Latvala, Sébastien Ogier and Andreas Mikkelsen will provide the odd bit of magic here and there, and hopefully surprise everyone.”

Who is quicker than Speedy Gonzales? – Small miracle needed on day one

With every World Rally Car that passes, more and more of the thick layer of gravel is cleared from the special stages. This effect even continues into the second loop of special stages at the Rally Mexico. This is a clear disadvantage for those opening the route. As such, even more pressure is on the drivers and co-drivers in the Volkswagen team. The works duos will be looking to limit damage on day one of the rally with a flawless job and perfectly calculated risks. Jari-Matti Latvala/Miikka Anttila top the Driver and Co-Driver standings with 40 points. As such, they will be first out onto the special stages on the opening day. Their team-mates Sébastien Ogier/Julien Ingrassia will follow two minutes later. With 35 points to their name, they are currently second in the World Championship. Another four minutes later, it is the turn of Andreas Mikkelsen/Mikko Markkula (24 points, fourth place in the World Championship) to hit the road.

The rules regarding the starting order in the WRC were revamped ahead of the season. The first day of the rally is now always run in the same order as the World Championship standings. The order on the remaining days is according to the overall standings at the end of the previous day’s rallying. Unlike in previous years, there will be no qualifying ahead of the start of the rally.

Like jogging with a snorkel – engines toil in thin air

The performance of the 1.6-litre turbo engines in the World Rally Championship is limited using an air restrictor, in accordance with WRC regulations. The effect is similar to breathing through a snorkel whilst jogging. With altitudes of around 2,800 metres above sea level in the Sierra de Lobos and Sierra de Guanajuato mountains, this effect is compounded at the Rally Mexico. The higher you get, the lower the oxygen content in the air, resulting in less efficient combustion. Furthermore, the air resistance for the turbo charger is also reduced. This increases the revolution speed in this component, and only by making adjustments with the engine management system is it possible to avoid a mechanical overload. The engines consequently generate 28 to 30 per cent less power than they do at the Rally Sweden.

“The altitude at the Rally Mexico affects the engine more than any other part of the Polo R WRC,” said Dr. Donatus Wichelhaus, Head of Engine Development at Volkswagen Motorsport. “On the one hand, the air pressure drops the higher you get, which in turns results in lower oxygen content in the air. On the other hand, the air resistance in the turbo charger is also reduced. As a result, this component achieves higher revolution speeds than at any other rally. In order to guarantee stability, but still lose as little performance as possible, we used various simulations even before last year to prepare for Mexico.”

In the heart of Mexico: mine shafts, winding roads, and “El Chocolate”

The extremes at the Rally Mexico provide a distinctive, contrasting programme for drivers, co-drivers and fans alike. The pop concert feeling of the “Guanajuato Street Stage” with 80,000 adoring fans is in stark contrast with the solitude of the highlands. A short special stage of just over one kilometre is more than offset by a 56-kilometre boneshaker. The Rally Mexico is one of the most multifaceted on the WRC calendar. Three special stages are worth particular mention, purely because of their length: “El Chocolate” on Friday at 44 kilometres, the 54-kilometre “Otates” on Saturday, and “Guanajuatito” with about 56 kilometres against the clock.

The most popular spectator point comes on the “Derramadero” special stage. Among the exquisite ingredients that combine to make the final, televised Power Stage so mouth-watering are the ultra-quick winding roads, a descent of about 200 metres within just 2.5 kilometres, and the “El Brinco” jump, which sees the World Rally Cars fly through the air in spectacular fashion. And all that just four kilometres from Cerro del Cubilete, at the top of which a 30-metre tall statue of Christ marks the geographic centre of Mexico.

Quotes ahead of the Rally Mexico 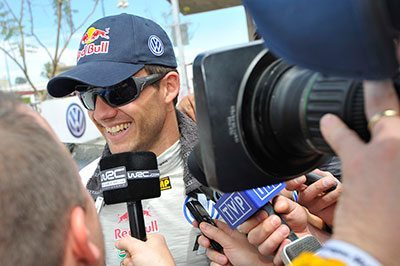 World Champion Sebastien Ogier will once again be the man to beat.Sébastien Ogier, Volkswagen Polo R WRC #1
“I like the Rally Mexico. The goal for this year is obviously to repeat last season’s victory. The special stages in Mexico, some of which are very long, are always a big challenge for us. As the second car out, we start in the knowledge that the road conditions will improve with each car. My starting position is definitely better than that of my team-mate Jari-Matti Latvala, but the guys behind us will have even better conditions. As such, we will have to perform as well as possible on the opening day, in order not to throw away any hopes of victory early on. One of our strengths last year was the engine in the Polo R WRC. We had fewer problems with the conditions, the thin air and the ensuing loss of performance than our rivals did. However, we all start from scratch again in 2014.”

Jari-Matti Latvala, Volkswagen Polo R WRC #2
“The win in Sweden was a special moment for me, and has obviously given me an extra dose of confidence. We used tests in Spain to prepare meticulously for the forthcoming gravel rally in Mexico and the difficult conditions we will encounter there. The scrapping of qualifying means I, as the championship leader, have to be first out onto the route in Mexico. It goes without saying that this is a handicap. However, rules are rules. This is definitely outweighed by the pleasure of travelling to Mexico as the leader in the World Championship. I will be sporting about it and do my best whatever the circumstances. If everything goes perfectly to plan, it could still even be possible to win. However, that is not my main goal. We want at least to finish in the points. A place on the podium would be great.”

Andreas Mikkelsen, Volkswagen Polo R WRC #9
“Sweden was a perfect weekend. We were in contention to win the rally, and second place was ultimately a fantastic result for Mikko and me. Once you have made it onto the podium, you obviously want to do it again. However, you cannot lose your sense of reality. We are now looking forward to Mexico, which is completely new territory for us. It will not be easy for us, as I have never actually competed at this rally. I was able to take part in the ‘Recce’ last season, which allowed me to gain an initial impression. My goal is the top five. I am definitely physically and mentally fresh going into the rally weekend. After Sweden, I went home and spent some time with my family and friends. I also went to New York for a weekend to relax a little. I’m ready to go again now though!”

You are the Car Chief for World Champion Sébastien Ogier’s Polo R WRC. In order to be successful, there has to be absolute trust between  the Car Chief and the driver. How long did it take you both to build up that level of trust?
Martin Hassenpflug: “It actually happened relatively quickly, as we are both about the same age. It was obviously also an advantage that we had contested the entire 2012 season together with the Škoda Fabia. Since then, there has been a blind understanding between us and we have cooperated absolutely seamlessly. That obviously pays dividends on hectic rally weekends.”

You have worked with many drivers. Can you tell us what makes Sébastien Ogier so special, and what makes him stand out from the other drivers?
Martin Hassenpflug: “Sébastien is definitely determined to win all the time. Ok, nearly all the drivers have that, but it is really extreme in his case. (laughs) When it is all or nothing and the rally is underway, he switches into winner mode – and away we go!”

You and your team pamper and look after the Ogier Polo several times every day. When was the last time you washed your wife’s car?
Martin Hassenpflug: “Actually, that happens very rarely. Every so often I will take it to the car wash, or vacuum the seats and floor at the petrol station. But that is about it. However, I have yet to hear any complaints that I have only been cleaning Séb’s Polo and not her car. After all, that is my work, while her car is private – as such, they are two completely different beasts.”

The number for the Rally Mexico: 3

Volkswagen have their sights set on win number three of 2014 in the third round of the World Rally Championship (WRC). The team from Wolfsburg, and its three driving duos, also travel to León and the surrounding area as defending champions and leaders in all three classifications (Driver, Co-Driver and Manufacturer). Last year, Sébastien Ogier not only claimed overall victory on Volkswagen’s third appearance in the World Rally Championship, but also picked up three bonus points for winning the Power Stage.