Volkswagen starts the WRC with a classic

From the hunter to the hunted: Volkswagen’s mission to defend its titles in the FIA World Rally Championship (WRC) opens with a genuine motorsport classic at the Rally Monte Carlo, as the “Monte” is the oldest rally in the world.

VW Monte Carlo previewFrom 14 to 19 January, the French pairing of Sébastien Ogier and Julien Ingrassia will line up for the first time as defending World Champions in both the Driver and Co-Driver competitions. Together with team-mates Jari-Matti Latvala/Miikka Anttila (FIN/FIN), they are the team to beat in the Manufacturers’ Championship, in which they can also count on able assistance from Andreas Mikkelsen/Mikko Markkula (N/FIN).

The first of the 13 rallies on the 2014 calendar is immediately one of the hardest nuts to crack in the WRC. Virtually unpredictable conditions and 15 testing special stages on asphalt, ice and snow in the French Maritime Alps, not to mention night stages and temperatures well below freezing – the Rally Monte Carlo is one of the greatest challenges in motorsport.

“We line up at the Rally Monte Carlo with start number 1 on one of our Polo R WRCs for the first time,” said Volkswagen Motorsport Director Jost Capito. “This honour is reserved for the World Champion, and is something we are very proud of. However, this does not mean that we will be arrogant or complacent this season – particularly not at the iconic ‘Monte’. We will approach it with the greatest respect, maximum concentration, and absolute commitment. It is easier to win a World Championship title than it is to defend it. And that is our goal. The 2014 ‘Monte’ will give us the first indication of where we stand compared to the new-look opposition. We are looking forward to it.” 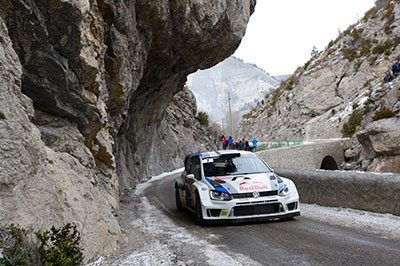 Victory at the “Monte” – a question of prestige

Formula One Grand Prix in Monaco, the Le Mans 24 Hours, the Indianapolis 500, the Rally Dakar and the Rally Monte Carlo – they are the five most prestigious motorsport competitions in the world. This year’s “Monte”, as the mother of all WRC rallies is affectionately known by fans, features four former winners. Sébastien Ogier/Julien Ingrassia, now driving for Volkswagen, won in 2009. They were followed in 2010 by Mikko Hirvonen/Jarmo Lehtinen, who will race for Ford in 2014, and fellow Ford pairing Bryan Bouffier/Xavier Panseri who triumphed in 2011. However, all three of these duos are missing the icing on the cake – their victories all came in the IRC (Intercontinental Rally Challenge) in a car complying with the Super 2000 regulations. A “Monte” win in the World Rally Championship? Only old hand François Delecour from France – also in action for Ford in 2014 – can boast one of those.

Volkswagen Monte Carlo Rally previewA new sporting format and a new challenger – the 2014 World Rally Championship season has a number of new features for fans and competitors alike. The previous qualifying procedure at gravel rallies is omitted. Instead, the starting order will now be based on the current World Championship standings. Detailed amendments have also been made to the rules allowing competitors to return under Rally2 regulations. Over the course of the season, the itineraries for the rounds of the World Rally Championship will be standardised. In the future, the rallies will all begin with the start ceremony on Thursday and end with Sunday’s final stage at about midday. The final special stage will always form the so-called Power Stage, in which bonus points are up for grabs in the Drivers’ and Co-Drivers’ Championship for the first three cars. However, the “Monte” is an exception to the rule when it comes to the itinerary: it ends with the final special stage – “Sospel – Breil-sur-Roya” – in the dark on Saturday evening.

Home banker? Well, there can certainly be no doubting that this is a home race for one man. The Rally Monte Carlo begins in the birthplace of the reigning World Rally Champion – in Gap. The town, with a population of 40,000, hosts the opening two days of the Rally, before the WRC circus heads to Monaco. For Sébastien Ogier, this means both an extra incentive and a little extra pressure. Scores of friends and family are expected in his home town to support the Volkswagen works driver at the start of the “Monte”.

Rain in the Service Park, dry conditions at the start of the stage, snow in the middle and ice at the end – the standard madness at the Rally Monte Carlo. Selecting the right tyres for a loop consisting of three special stages is a real gamble. Winter tyres with and without spikes, soft and super-soft slicks are available to the drivers, who can call on the detailed information they receive from their trusted ice spies. Nowhere in the World Rally Championship is it more important for the weather crew to be perfectly coordinated and communicate clearly than at the legendary “Monte”.

The Rally Monte Carlo traditionally winds its way through the French Maritime Alps and thus through the hinterland of the principality. The mother of all the stages on the 2014 rally promises to be the special stage between Vitrolles and Faye. At 49.03 kilometres, it is one of the longest on the WRC calendar. The final stage, from Sospel to Breil-sur-Roya, will also play a crucial role. Its 16.55 kilometres form the Power Stage. The fastest three cars here will earn bonus points towards the championship. The anomaly: starting at just after nine o’clock in the evening, the Power Stage at the “Monte” will take place in the dark. The Service Parks are another anomaly: the cars will be maintained in Gap on the opening two days of the Rally, with the harbour in Monaco – a stone’s throw from the famous Rascasse corner from the Formula One Grand Prix – providing the backdrop to the second Service Park on the final two days.

Quotes ahead of the Rally Monte Carlo

Sébastien Ogier, Volkswagen Polo R WRC #1
“Our main goal is obviously to defend the title. It is never easy to win a title, but successfully defending it is even more difficult. I am certain that the other teams will put us under pressure. However, I am confident about the new season on the back of such a successful 2013. We have made small improvements to the Polo R WRC. For example, it is now even more reliable. A new manufacturer is joining the series in 2014, in the form of Hyundai, and this will make the competition even fiercer. That is what I am really looking forward to in Monte Carlo. I am also pleased that the ‘Monte’ will start from my home town of Gap this year. That is an extra incentive for me to be the fastest come the end of the rally.”

Jari-Matti Latvala, Volkswagen Polo R WRC #2
“For me, the start of the new season is a completely different situation to one year ago. Back then, both the team and the car were new to us. We are now familiar with everything. However, the first rally of the season in Monte Carlo is always a challenge. I will try to finish in the top five at the ‘Monte’. The Rally Monte Carlo is an extremely unusual rally. Tyres will play a major role, as the Service Park is not located in the mountains. As such, you have to speculate on what the weather will be like up there. The ‘Monte’ features 30-kilometre special stages, on which you are driving on dry asphalt for 20 kilometres and ice for the remaining ten. 20 kilometres of asphalt on spikes is just as awkward as 10 kilometres of ice on slicks. Choosing the right tyre is the biggest challenge. Do you opt for snow tyres with spikes, snow tyres without spikes, super-soft slicks or soft slicks? You have to find the perfect compromise between these four options.”

Andreas Mikkelsen, Volkswagen Polo R WRC #9
“The main goal is to claim the odd podium finish in 2014. This is only my second ‘Monte’. I lined up there in 2011 and crashed out on the first special stage. This means the ‘Monte’ is a completely new experience for me. As such, I will not put all my eggs in one basket, but will take a rather cautious approach. My goal is to complete the rally and finish in the points. I did not race at the ‘Monte’ last year, so my expectations there are not as high as the rallies I drove in 2013. I would be happy to get through the Rally Monte Carlo without any mistakes this year.”

…the Rally Monte Carlo was not originally planned as a motorsport event? Back at the start of the 20th century, the residents of Monaco were looking to attract tourists to the Côte d’Azur in the winter months. It was for this reason that Prince Albert I gave the green light for the inaugural “Monte” in 1911.

… the first “Monte” in 1911 started from Paris? 23 cars started out from the French capital, crossing the finish line in Monte Carlo 1,020 kilometres later.

… the first winner of the “Monte” was Henri Rougier (F)? The cyclist, pilot and racing driver from Marseille crossed the line first in his Turcat-Méry 24CV.

… the first Rally Monte Carlo was not just about speed? Besides the time spent driving, a jury was also on hand to judge the elegance and comfort of the cars, as well as their condition when they reached the finish.

Chassis number 15, 17 and 18 will be used at the Rally Monte Carlo for the Polo R WRCs driven by Andreas Mikkelsen, Sébastien Ogier and Jari-Matti Latvala. This is already the sixth rally for chassis number 15, with which Andreas Mikkelsen made his Volkswagen debut in the World Rally Championship in Portugal last season. The youngster then used the same chassis in Greece, Finland, France and Great Britain. Chassis number 17 was run solely on asphalt by Sébastien Ogier in 2013 – in Germany and France. Jari-Matti Latvala will take his place in chassis number 18 for the second time, having previously used it at the Rally Germany.