WA driver looking to go out on top in Forest Rally 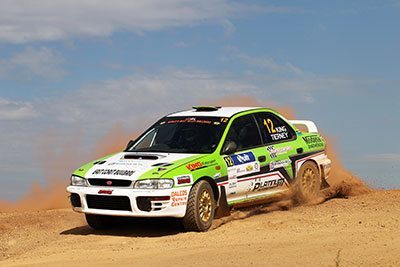 A year ago young Dylan King claimed an impressive National 4WD victory at the Quit Forest Rally. As we head towards this year’s edition of the West Australian forest classic, King has big plans away from the sport and is looking to go out on top.

“My plan is the Forest Rally, and after that that’s probably going to be it for a while,” King said matter-of-factly. “I’m going to focus on establishing my own business, and rallying is just going to have to wait a couple of years while I do that.”

At just nineteen years of age King saw off a host of hotshot local drivers at last year’s Forest Rally, including Tom Wilde, Leigh Hynes and Doug Tostevin, to win the National 4WD category in his Subaru Impreza WRX.

That momentum though came to a sudden halt two events later when he rolled his Impreza at the WA State round in Boddington, before then destroying the engine at the very next round in Collie.

“I really haven’t rallied in over ten months,” King explained. “So I’m really looking forward to contesting the Forest Rally again. Last year was so disappointing after the roll and the engine, so I’m really looking to put all that behind me with one final rally.”

King said he’s hopeful of recapturing the form that he showed a year ago, before he sets his sights on establishing his earth moving business in Western Australia.

“I’ve been very lucky to go rallying the past few years, but now it’s time to concentrate on the next stage of my life, and that’s exciting for me more than disappointing,” he said.

The challenge will be even hotter this year with both Justin Dowel and Mark Pedder due to contest the National 4WD category at the Forest Rally. “It’s definitely going to be interesting,” King commented. “I’ve not raced against either of them, and who knows what to expect from the Maxi car Mark will be running.”

“Right now I’m not getting ahead of myself, I’m actually still waiting on the replacement engine for my car to turn up, so I’ve still got a fair bit of work ahead of me before I start thinking too hard about who I’ll be racing against.”

The Quit Forest Rally gets underway on Friday 27th March with two blasts around the Trade Hire Busselton Super Special Stage. Crews then have a further sixteen forest stages, and one further run in Busselton, to contend with before the champagne is sprayed on the podium in Nannup on Sunday afternoon.