Where are they now? Joe McAndrew - RallySport Magazine
×

Where are they now? Joe McAndrew

“Smokin” Joe McAndrew was one of the biggest names in New Zealand rallying in the 1990s, driving a succession of Subarus.

RallySport Magazine caught up with the three-time champion.

JMcA: The most satisfying during the early 1990s was 1993, especially after missing the win in the 1992 championship after a last rally, last stage crash – all we had to do was finish the rally, but we broke the cam pulley.

We all worked well together as a team. Someone once told me: “You have to lose one to win one,” so 1993 was to be our year. 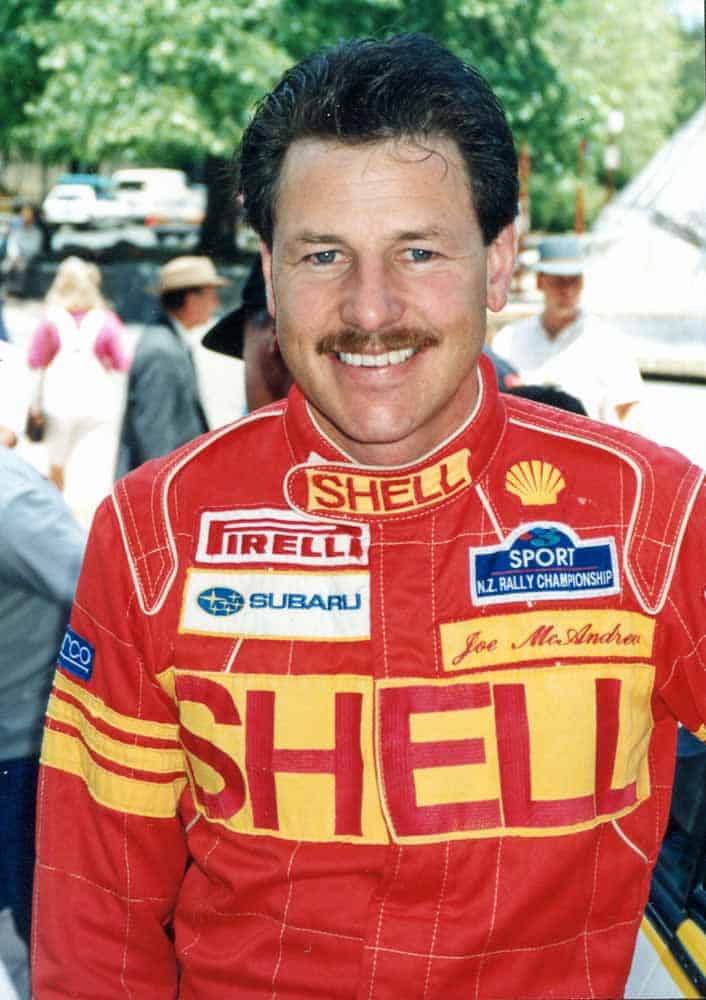 Joe McAndrew at the Rally of Canberra in 1994.

When you got your Prodrive Legacy, it was head and shoulders above the locally built cars. What are your memories of that car?

Our Prodrive Legacy was a truly amazing car to drive. The left hand drive took a little while to get used to, but felt right and I knew I was in a real works car when I was driving it.

On the first rally, Bob (Haldane) said I was very close to his side, the next stage, with both mirrors folded in from the bushes, I said to Bob: “Now we are close”.

The noise it made when idling was very special, the fans buzzing and popping, it had a great sound to it.

How did the purchase of it come about, and was it an expensive buy?

We contacted the Prodrive Customer Department and spoke to David Campion, expressing an interest in purchasing a works Legacy at the end of the 1993 season.

We paid a deposit to start the process, and after selling our right-hand drive Legacy, Bob and I funded our dream car with the help of sponsorship from Shell Oil. We had managed to make it happen. 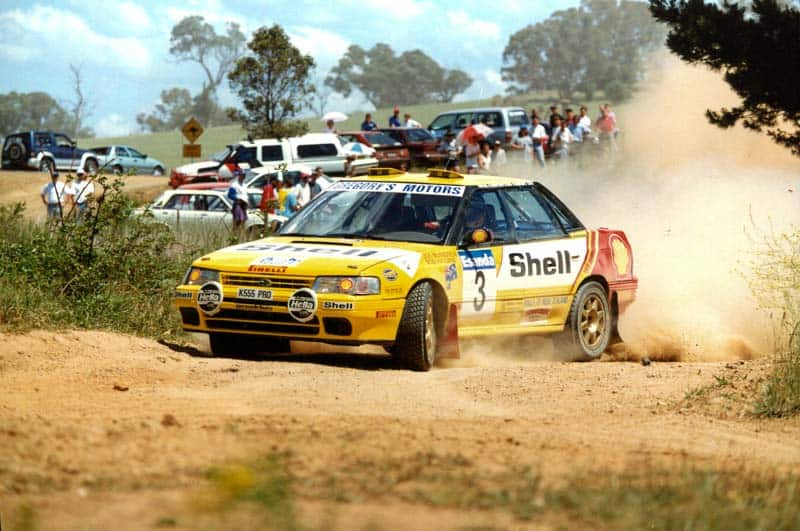 McAndrew throws the Legacy around in the 1994 Rally of Canberra. Photo: Stuart Bowes

Australian fans will remember you competing in the Shell Legacy in the 1995 Rally of Canberra. You set the pace early and thrilled the crowds. Did you enjoy the experience in Canberra?

Canberra was great, so yes, I really enjoyed the adventure. Bob and I worked on our notes and checked and double checked stages well, and it gave me the confidence to drive fast.

I loved the racing there, we were clicking well together. We jumped high and the car felt good. While leading the rally, the newly fitted front wheel bearing failed.

The Legacy had an epic Rally New Zealand in 1996. You had many incidents and the car was battered and bent. Tell us about that rally.

On the first day we clipped a hidden tree stump with the left front corner, which also took out other top competitors. We chased the problem all rally and it was a handful to drive.

We hit all corners of the car, and had bits hanging off it.

You had some great rivalries with Neil Allport and Brian Stokes, among others. What are your special memories about those years?

In the early ‘90s I started the rivalries with Neil Allport and Brian Stokes. With both of them already being champions, there was something to aim for.

Both were fast in different events. Allport was always aggressive and he wouldn’t talk, and he hated someone who could beat him. We swapped many rally wins. 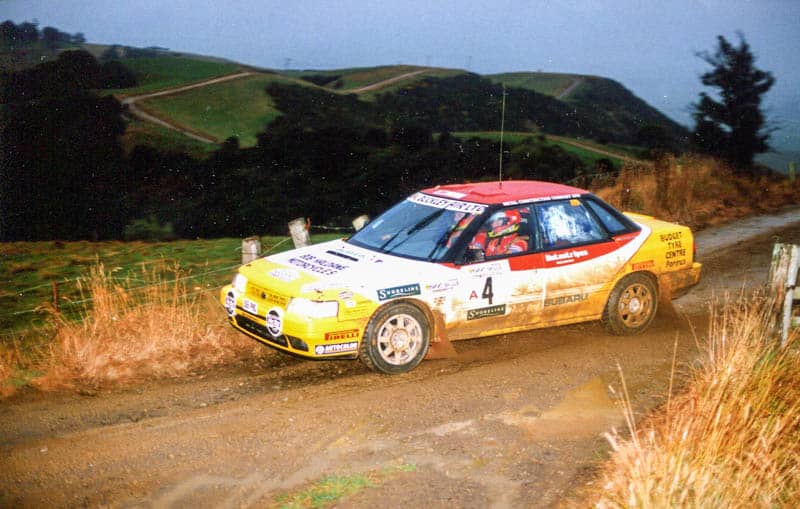 I’ve been asked to question you about the Silver Fern in 1990 when you drove a twin cam Corolla. What do you remember about this event?

We built a twin cam ’73 Corolla up for my wife to use after the Silver Fern Rally in 1990. In the Silver Fern we led the rally throughout the South Island and some of the North, before breaking a stub axel and losing the lead.

Co-driver, Mike Wilkin, sat in the boot to balance the car and get it going and out of the stage.

On the 50km Motu stage we were fifth on the road, but we passed three cars and caught second overall, Nelson Marshall and PJ, in the Capri V6.

The dust was bad, but I tried to pass them. We crashed 2km from the end at a 90-degree corner by a house. We hit a tree and that was a DNF for us.

Your co-driver, Bob Haldane, was a very quiet person and perhaps the complete opposite to you in some regards. You must have had a great relationship in the car together?

Bob was always well organised with everything, in the office (car). He planned a lot before each event and he managed me as well!

Before the start of a stage he helped me to take deep breaths so I would be up to speed straight away.

We worked on strategies and pace, tyre selection through each event. We were a fantastic team in the car – I give Bob a lot of credit for our successes. 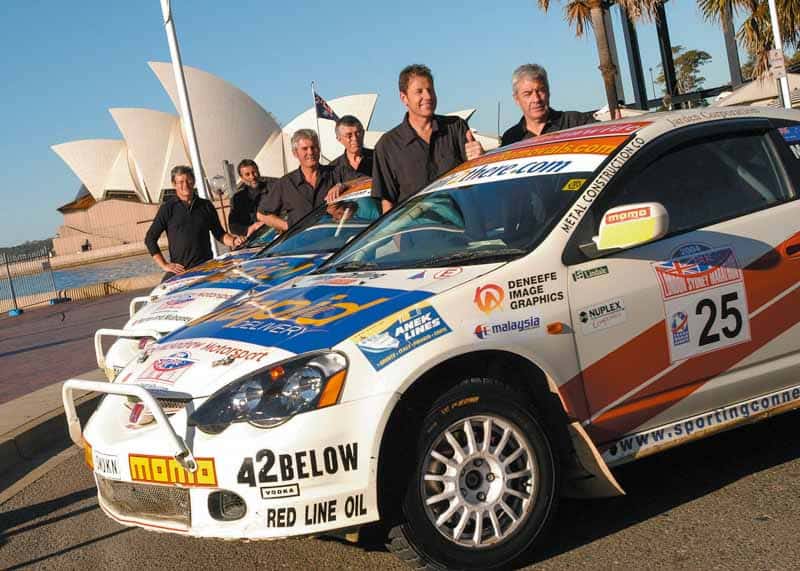 In later years, Joe McAndrew (second from right) has tackled marathon events such as the London to Sydney Rally.

In later years you did some marathon events, winning the 2002 Midnight to Red Sea event. Is that something you enjoyed, and how did it compare with stage rallying in the NZRC?

We did several marathon rallies, the first Midnight Sun to the Red Sea Rally in 2002. It was 20 days, 8000km, through nine countries.

I used all my experiences and discipline by not cutting corners, and limited my revs to 500rpm less.

These were all blind stages, and it was a great experience to travel the world and rally in so many countries doing your sport, on so many different roads and surfaces, gravel, tarmac and some desert stages.

In 2002 we went from Sweden to Jordan through Europe, winning what was a fantastic event. I definitely loved it: the people, the competitors, it was so good meeting them all along the way. The scenic route we took added to the adventure.

After this win we had to plan for the 30-day 2004 London to Sydney Rally. This required lots more planning and in this one my co-driver, Murray Cole, and I entered a three-car team of DC5 Honda Integras in Group N. They were all from NZ.

It was another fantastic win for me, and the team finished first, second and third.

As a former NZ Champion, how does it make you feel to see Hayden Paddon doing so well in the WRC, and now starting to challenge for event victories?

I just love to see Kiwis doing well. As a champion myself I know how hard it can be to win, or succeed overseas. It requires so much effort, so it’s in our blood to support Hayden in his adventure to win in WRC.

I wish him all the luck to achieve his goals on the world stage.

What are your thoughts on the new AP4 class cars as the NZRC appears to go from strength to strength.

Firstly, it looks expensive, with some reliability problems. But if there are good fields and it looks to be catching on, it will be good for spectators to watch these AP4 cars in anger, and the competition will be great.

Finally, what is Joe McAndrew doing these days? Where are you working, and how closely do you follow rallying? And, do you have any plans to compete again?

I love supporting and watching motorsport. I do it for fun now. I have competed a few times at the Leadfoot event, and I have driven other friends and people’s race cars in different events, as they like to see their machine going so well.

Some people can own and build good cars, but are not confident to race them. Sometimes it’s a challenge to sort and drive each vehicle because of the particular car or event.

I’m self-employed in the plumbing and metalwork industry, and when I’m not working I like to travel in our motorhome.

Related TopicsFeaturedWhere Are They Now?