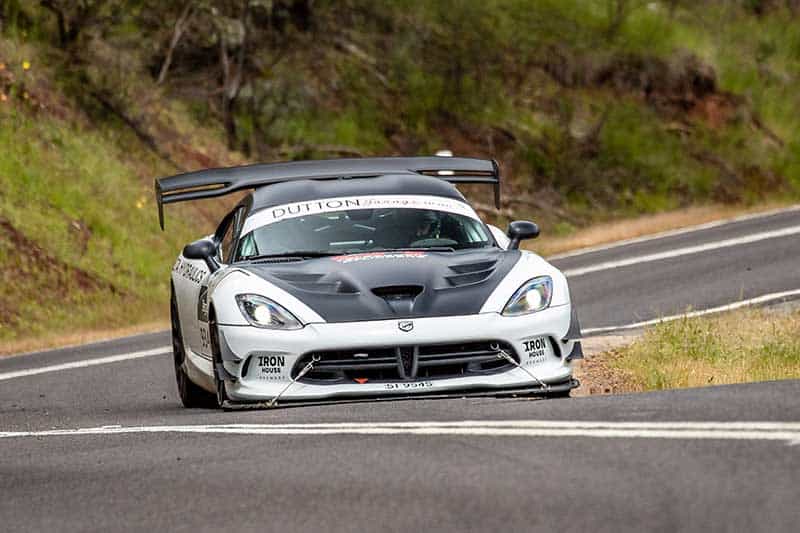 Dodge Viper ace Jason White continued to bound away from the field in search of a successful defence of his Targa High Country crown.

Showing no mercy in changeable conditions, White and his co-driver uncle John White surged to a one minute 42 second lead in the race for Outright and GT2 honours.

The Whites have topped 13 of the 15 stages that have been run to date across the first two days of competition.

Second outright is held by Paul Stokell and Kate Catford in their Lotus Exige 350 while Eddie Maguire and Zak Brakey had a solid day to be just over two minutes from the lead.

“The first stage (TS9 Mirimbah) was interesting and got us to wake up because there wasn’t much grip,” White said.

“There was just the right amount of moisture during the rest of the day for us and everything panned out well.

“I think there was one stage where another Viper (Eddie Maguire) pipped us but we can’t complain.

“Our tyres are in good shape and we haven’t used our new set for the front as yet so we are looking forward to the last four stages tomorrow.”

With Stokell and Catford putting up a decent fight, the big mover in the field was Matt Close and Cameron Reeves in the brand new Porsche GT3 RS.

Close, a two-time winner at Targa High Country, started chomping into the leaderboard before finishing Leg 2 in sixth Outright.

Maguire, who was the only driver outside White to win a stage (TS 13 King Valley) had a particularly strong day and is threatening to make it a Dodge Viper quinella.

Dutton Garage GT4 has seen Tony Quinn and Samantha Gray (2018 Nissan GTR) withstand a push from Luke Anear and Alan Stephenson (2015 Subaru WRX) who were placed third overnight but moved up to second. Anear is 45 seconds behind Quinn.

Meanwhile Barrie Smith and Dale Moscatt (Audi TT RS) remain third, one 31 seconds from the class lead. Max Williams and Bruce Bush (2011 Audi TT RS) have slipped from second after Leg 1 to be in fourth place, just over 2 minutes behind the Quinn Nissan.

Dutton Garage Early Modern saw Peter Nunn and Keith Johnstone (2001 Porsche 996 Turbo) continue to have a tight tussle both Guy and John Lilleyman (2006 Mitsubishi Evo IX) and Liam and Larry Howarth (1995 Nissan Skyline GTR). In the end Howarth got in front of Lilleyman to trail Nunn by 29 seconds.

In Classic Handicap Graham Copeland and Josh Herbert have again withstood the elements. After starting the day with a 27s buffer, they built that advantage to a handy 1:36s in their 1941 Jimmy Special.

“We’ve had a really good day especially on the faster stages we were surprised on how well the old girl has done in them,” Copeland said.

“On one of the stages we passed one of the modern Mustangs. We saw 175km/h at one stage today and in this old girl you are taking your life into your hands.”

Ever popular Mick Downey and Jarrod Akker, driving the 1979 Holden Group C Commodore, continues to dominate the Classic GT section with a lead of over four minutes.

Jack Waldron and Vin Gregory are blitzing the field in the Mansfield Shire Thoroughbred Trophy class. The Mitsubishi Sigma pair enjoy a 4:07min buffer over Michael and Erin Arundel (1963 Ford Cortina). Robert Greig and Steve Harris (1971 Datsun 240Z) are more than 6 minutes away in third.

Competition remains red-hot in the penalty-based TSD Trophy with Peter and Tristan Taylor on 9 points to lead the standings over Robert Bryden and Doc Lange (2017 Lotus 380 Cup) on 13 points. Samuel Parkinson and Benjamin Hughes (2014 Ford Fiesta ST) are third on 27 points, five markers ahead of Neville Edmond and Stephen Jones (1996 Volvo 850 wagon).