Kris Meeke and Mads Ostberg got their first full season as Citroen drivers off to a flying start by sharing second place with a time that was 1.2s slower than Ogier’s benchmark. 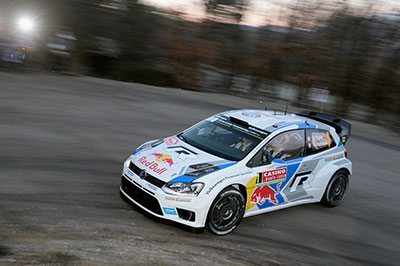 With the shakedown stage located in the village of Chateauvieux – six kilometres south of Ogier’s hometown of Gap – the Frenchman was on familiar ground. However, he wasn’t reading too much in to the results from shakedown.

He said: “The weather today has been perfectly dry, but the road condition was changing a lot. Some of the other guys were maybe a little slow this morning but we will have to wait for the rally to see how quick people really are.

“A lot of rain is expected tomorrow and the conditions will be very complicated. Starting first on the road at 7.30 in the morning in the dark will not be an easy job for us.”

Meeke was pleased with his performance during shakedown, particularly as he didn’t think he was running on the most suitable Michelin rubber.

“Everything feels good, so I can’t complain,” he said. “We were using the soft tyre rather than the super soft – which I believe was the correct choice for these conditions. Looking at my time, it seems to bode well for the rally. I’m feeling comfortable.”

VW’s Jari-Matti Latvala was fourth quickest at shakedown in a time of 2m 18.2s, while Robert Kubica showed that he gathered a lot of useful experience during his hard-fought win on the recent Jännerrallye to go fifth fastest in his Ford Fiesta RS WRC.

His time of 2m 18.3 was 0.1s faster than that of Thierry Neuville who was going up against the WRC stopwatch for the first time in his Hyundai i20 WRC.