As part of a fundraising activity for battling farmers and Frontier Services, Jordan and his fellow school students from St. Marys College in Toowoomba, Queensland, dared two brave teachers to hop in a rally car driven by Jordan if they all raised enough cash for the charity.  The fundraising target was swiftly reached and the teachers became the students and had to had to sit down, shut up and hang on as they got taken for a ride of their life.

Jordan has been part of his father’s rally team since the day he was born and has been racing cars himself since he was twelve years old.  He gave up the excitement of competing this weekend, rather taking the time to carefully strap in and helmet up each teacher and prepare them for a quick demonstration and lesson in driving skill and car control.

Jordan is part of a local car club that actively helps and encourages kids into cars and assists them in learning the skill of car control in adverse conditions, as well as preparing them for the next step into rallying.

While Jordan has his own rally car, he used his Dad’s for this fun and fundraising opportunity.  The car of choice was a 2002 VS Commodore Ute that Jordan’s Dad, Jamie, rallies all over the country.  It is a very competitive rally car, but most importantly, it is built to an extremely high level of safety.

So while these teachers may have feared for their lives, the reality was, they couldn’t have been in safer hands.  Jordan is a skilled and disciplined driver, the car is built to the highest safety standards and it all took place in an organised and controlled environment.

The idea came about quite a few months ago when Jordan was looking for a way to assist struggling farmers in the peak of the Queensland drought.  Even though much of the immediate drought pressure has eased, a lot of the emotional scars and community issues still remain, and will for a long time.  Frontier Services work in remote and regional areas and offer support and assistance to farmers, individuals and communities, right across Australia.

These two brave teachers who volunteered their time for the fundraising project were both very excited after being taken for a ride by one of their students.   The ride was run in conjunction with a club Khanacross event that was held on Saturday, May 10.  Jordan, his fellow students and the teachers, all raised $750 through the fun, fundraising project. 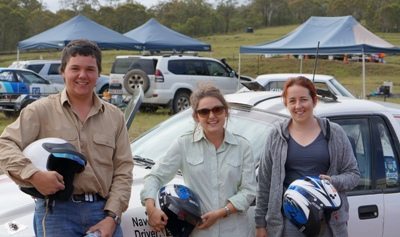 APRC finalists to be decided at The Bend