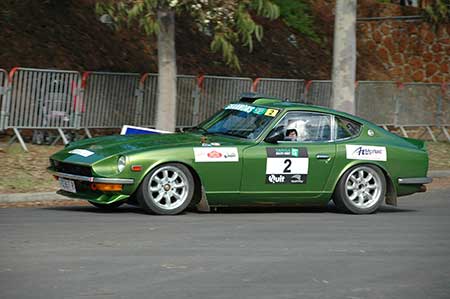 Thirty-eight vehicles took to the closed-off streets around Pemberton and Manjimup on the weekend for the 2015 Targa South West rally.

Organisers hailed the event as a success with no withdrawals due to accident damage and a large percentage of first-timers expressing interest to continue rallying.

“Out of 76 competitors we had 30 rookies. Their feedback reinforced Targa South West as an ideal event for people to try tarmac rallying in a relaxed social atmosphere,” said Targa South West Events representative David Smith.

“We also had a number of return entrants competing in their fifth Targa South West event, which was good to see.

“Targa South West has been an exciting prelude to Quit Targa West, which will take place in mid-August.”

The Targa South West is a two-day non-competitive event on closed tarmac roads, making it the perfect first event for rally newcomers, as well as a solid testing ground for those preparing for a competitive rally.

Simon Gunson from GTi Racing runs a team of experienced motorsport participants and crew which work alongside new recruits from the MTA to look after the team’s six vehicles.

“The GTi Racing Team brought two of their own cars down to Targa South West, and we also looked after four other cars with the assistance of apprentices from the Motor Trade Association,” said Simon.

“We have a team of full time qualified technicians which mentor the apprentices, helping them learn the trade, and encouraging them to get involved in motorsport. It’s good for them. Every year we cycle 16 apprentices between the Targa South West and the Targa West events.

“Targa South West is a fairly easy rally to get into just because it is non-competitive, and has a fairly casual social vibe, so it gives them the experience of rallying without the overall pressure.

“It’s a good practice event for those who want to try rallying or are looking to compete in Quit Targa West. Even for the experienced crews, it’s a good event for fine tuning your skills.”

The event was flagged off in Pemberton on Friday, with a charity hill climb to raise money for local community organisation Help-a-Mate.  Members of the public were able to catch a ride in a rally car of their choosing for a $20 donation to the cause.

The charity event appealed to the competitive nature of the drivers, becoming a battle to see who could give the most rides. The honours went to Doug Stevenson in the Willisford Interiors Commodore Ute raising $200 with ten rides.

Targa South West continued in Pemberton for the beginning of Day Two, where the Big Brook Dam, Gloucester and Kurandra Special stages provided a twisty challenge for competitors, amongst stunning European-style forest backdrops.  The competitors then moved to scenic Manjimup for the Cutts Transport Special Stage in the heart of the town.

Driver Will White said he and his co-driver Mandy Lister both enjoyed the town stage.

“The tarmac bumps provided a good opportunity to test the Nitron Suspension set-up that we recently put in the Mitsubishi Evo – it’s a been a good test ahead of Quit Targa West in August,” White said.

Saturday night gave the competitors, officials, service crews and local residents a chance to unwind and socialise when they were treated to a Southern Forests buffet showcasing the best local produce at the Genuinely Southern Forests Dinner.

A stunning vehicle display was assembled along the main street of Pemberton on Sunday morning. The pristine classic vehicle line up featured a 1923 T Bucket Hotrod, Mustangs, Corvettes and Triumphs next to late model Porsches, Subarus and Holdens.

Later Sunday morning it was back to business for competitors who took on the streets through picturesque Pemberton for the Manjimup Truffles Pemberton Town Special stage. Here, the spirit of motorsport mateship was honoured – Paul Crute’s vehicle experienced a steering issue not far from the finish, so fellow competitor Mark Dobson brought out his trolley jack to lift up the front of the car and rallied the help of other competitors who pushed Crute’s car over the finish line.

Competitors were left impressed by the support from the host towns of Manjimup and Pemberton, who once again loaned their beautiful region for a weekend to the event.

“If the excellent roads weren’t enough, the real highlight of Targa South West is the warmth and generosity of the townsfolk. Where else can you ask people to close their town for a day, race around their streets, and have them say thank you, please come back next year? It’s wonderful stuff – and I can’t wait to come back next year,” said competitor Andy Van Kann.