RallySport Magazine's World Rally Championship expert, Martin Holmes, delves into each team's plans for the 2017 WRC and the new formula World Rally Cars that will grace the stages next year.

Six months remain until the start of the 2017 Monte Carlo Rally and there is an endless list of matters still to be settled, none quite as important as how the new World Rally Car rules will work out in reality.
Whether they are wise or not, the technical rules are largely settled and the teams have begun their work of evaluating and adapting these to the cars which are available to them, learning to manage increased power output, exaggerated aerodynamic work and more sophisticated transmission designs.
The element of wisdom rests with the enhanced security issues brought on by the introduction of much more performance cars than are currently seen on the special stages.
With the promised return of Toyota to the WRC, we expect there will be five teams in the championship in 2017.
Two of these seem to be well advanced in their design work, Citroen and Volkswagen, while Hyundai are proceeding with “mule” prototype cars, testing various new technologies.
M-Sport is unable to begin their work before the new version of the  car on which their 2017 car will be based is available, and Toyota is wrapped in secrecy.
Here is the latest situation for the teams, based on information that is already available.  The race is now on for teams to finalise designs of their cars ready for homologations application, in time for the start of the 2017 season.

Citroen
First test was in the south of France, then Citroën Racing headed to Portugal and the Algarve.  Test work has been carried out with Kris Meeke and Stéphane Lefebvre.
Laurent Fregosi is Citroën Racing’s Technical Director responsible for the work.
“During the tests, we have several objectives. Obviously, we want to check the reliability of the various components.  But our work is also focussed on looking for performance and driver comfort,” he said.
Fregosi has worked on every rally programme since the Xsara Kit-Car, taking over from Xavier Mestelan-Pinon at the start of 2016 and has been involved for over a year on the 2017 WRC programme.
“We also wanted to try out a few new solutions for the future. We used a Citroën C-Elysée WTCC engine, which meant the car immediately possessed the same power level as we’ll see next year.” (It is known that a new engine has been designed for the C3 WRC).
“Although we have already completed two test sessions, we’ve only just begun the journey.  At this time, we are also preparing a second car, which will be shortly used for testing on tarmac.
“This way of working will continue until we need to obtain homologation of the car for the 2017 Rallye Monte-Carlo.  That seems so far away, and yet it’ll be here before we know it!” 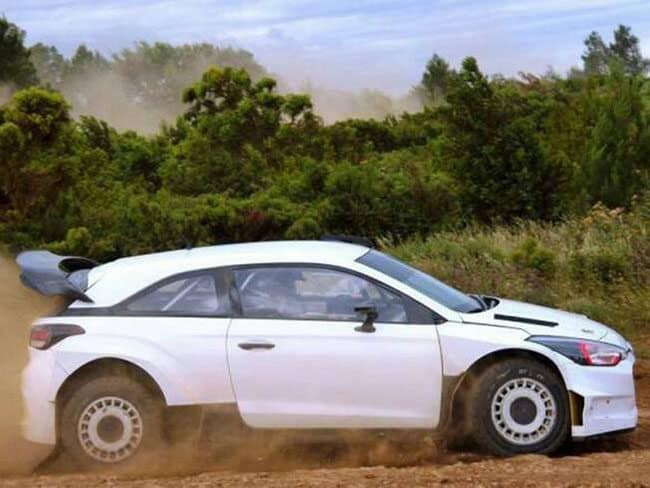 Hyundai
Hyundai Motorsport’s Competition Director, Michel Nandan, has given preliminary details of the car that his team is planning to use.   After assurances earlier in the year that the unexpected change of production plans meant that the 2016 rules i20 WRC car, with a four-door body, would then serve as a running development car for the 2017 car, it was therefore a surprise to see spy pictures of the prototype 2017 car with a two-door chassis.
Nandan explained:  “The (three door) Coupe i20 will be the basis for our ‘17 car.  This is the model we had hoped to use before production plans were changed, preventing us from running the Coupe version in ’16.
“It is a real ‘mule’.  We had one Coupe body shell left over from last year on which he had already started work on before we heard we could not use it for homologation at that time.  This work started early April (2016).
“In parallel we are assembling the first 2017 car which is based on (a latest version of) the same body shell.  In fact what is essentially different with the 2017 version is just the pickup points of suspensions, because of the new regulation (wider cars etc.), but all the rest is really similar.  Roll cage is the same and so on.
“The Coupe is almost exactly the same size as the 2016 NG i20 WRC.  The wheelbase is the same, the body platform is the same, and engine installation is similar.  There are changes to the front bumper of the road cars, in fact there is only a five millimetre difference on the total lengths between four door and three door.
“The engine we are using at the moment on our mule car is a ‘16 engine with a ’17 turbo and bigger restrictor, ’16 suspension, ’17 transmission.  The ’17 rally engine will have an evolution of that engine.  So it will not be a big difference, but we are working on the packaging.
“The cylinder block is bit different in design, cylinder head as well, but in the principle it is similar to 2016.”

M-Sport
M-Sport director Malcolm Wilson said in Poland that 2017 WRC testing would start “in around two week’s time”.  He confirmed that no specific testing had taken place regarding the new World Rally Car rules.
It was explained that a special factor is that the car on which the M-Sport 2017 challenger is based is a brand new production car for Ford, and the team has not been able to acquire a new production Fiesta.  It is a model that hasn’t even been launched.
“The car we will be testing will be based on the current chassis, but at least we’ll be able to get most of the new components tested.  We are later than everybody else, but we’ve got a really strong team of people and I feel pretty confident we can still deliver when it counts.”
As for a test driver assigned to this project he said: “We will obviously use people from within the team.  Matthew (Wilson) will definitely do a lot of the initial testing with Eric (Camilli), Elfyn (Evans) and we might even bring Henning (Solberg) in.
Henning has got a lot of experience and, as you know, he is very passionate about everything mechanical on the car, so he could be a good asset to testing.” 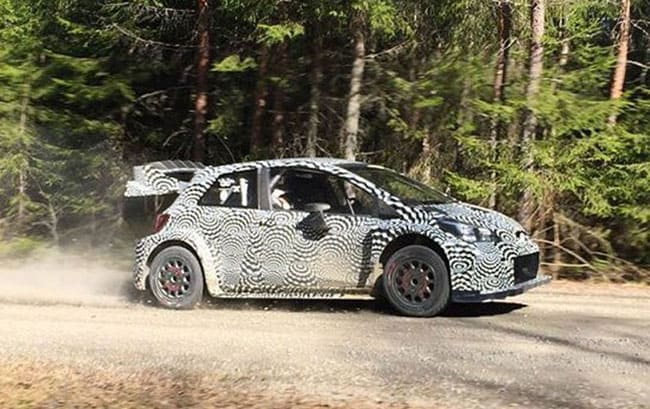 Toyota is still a bit of a mystery, with little information revealed of their 2017 WRC car.

Toyota
This is the mystery team.  This is a story of confused objectives, but in July 2014 at the occasion of Neste Oil Rally Finland a delegation from Toyota visited Tommi Makinen and inspected a prototype four-wheel drive GT86 which they had commissioned, suggesting he would be part of a future WRC project.
In January 2015 it was officially announced that Toyota would enter the WRC in 2017, a programme which would be run by Toyota Motorsport GmbH in Germany.
On their own account they had undertaken a lot of development work on a 2017 car even before most the rules of the format were known, which seemed strange, and had a lacklustre record on other rally based projects.
In July 2015 it was announced that the WRC project would be run instead from Finland, under the leadership of Makinen, with Germany only providing engine and aerodynamic input.  Makinen immediately declared that his team, which he immediately started to build up, would start off with a white sheet of paper on the drawing board.
Latest information says the plan is to run three cars.  Juho Hanninen has carried out most of the testing and there have been some other drivers.  The team started with six people a year ago, now there are over 70, and by the end of the year there will be 100-110.
But there have been alarming reports that certain engineers have decided to leave the team.  No technical details of the car have been released. 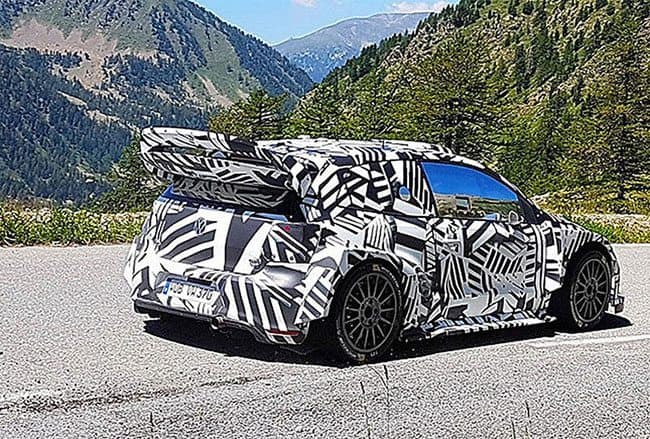 VW have been testing the 2017 WRC car for some months already.

Volkswagen
Considerable testing has been carried out with VW’s 2017 WRC with the drivers, while other test work is in the hands of VW’s in-house driver, Dieter Depping.
Still more aerodynamic changes are to come to the front and sides of the car.  The engine will have a new block, cylinder head, pistons, crankshaft, camshafts and so on.
The design team for the Polo WRC has been retained with FX Demasion responsible for the chassis, Donatus Wickelhaus for the engine, and Willi Rampf is overlooking the whole project.
Testing has (so far) been uneventful and now some work is concentrated on gaining operation of the car, like simulating impact consequences, making damaged parts easily replaceable by crews, with a lot of simulated work to anticipate with effect of performance when untoward damage or failures occur.
And all this while the company looks for a new competition director.

Read the latest issue of RallySport Magazine with 80 pages of news, feature stories, interviews and event report. Available to read for FREE by clicking HERE.