The FIA Junior WRC Championship has finalised its calendar for the 2022 season, which sees the biggest refresh in the championship’s history.

The five-round calendar will form part of the 2022 FIA World Rally Championship support categories to offer the WRC’s future stars a taste of what to expect as they embark upon their international rally careers.

For the first time in its history and using the all-new M-Sport Poland Fiesta Rally3, Junior WRC will be a four-wheel drive championship in 2022, providing the perfect introduction to life in the WRC.

The 2022 Junior WRC calendar will take in every type of surface offered on the WRC calendar: Snow and ice, Tarmac, fast gravel and rough gravel. The championship is the best opportunity for young drivers to learn what it takes to master every surface at the top level of rallying in a four-wheel drive car.

Starting on the snow and ice of Rally Sweden, the 2022 championship will head to the adrenaline-fuelled asphalt roads of Croatia Rally which made its WRC debut and marked the start of the 2021 FIA Junior WRC Championship.

Round three sees the highly competitive championship head to the gravel roads of Rally de Portugal; a true WRC classic that has delivered its fair share of excitement and adventure in Junior WRC over the years.

Rally Estonia marks the fourth stop on the 2022 Junior WRC calendar and will be the championship’s third visit since the event made its popular debut in 2020.

The 2022 Junior WRC Championship will conclude on the rough and tough gravel roads of Acropolis Rally Greece with double points on offer to all crews that have competed in three or more rounds of Junior WRC in 2022. 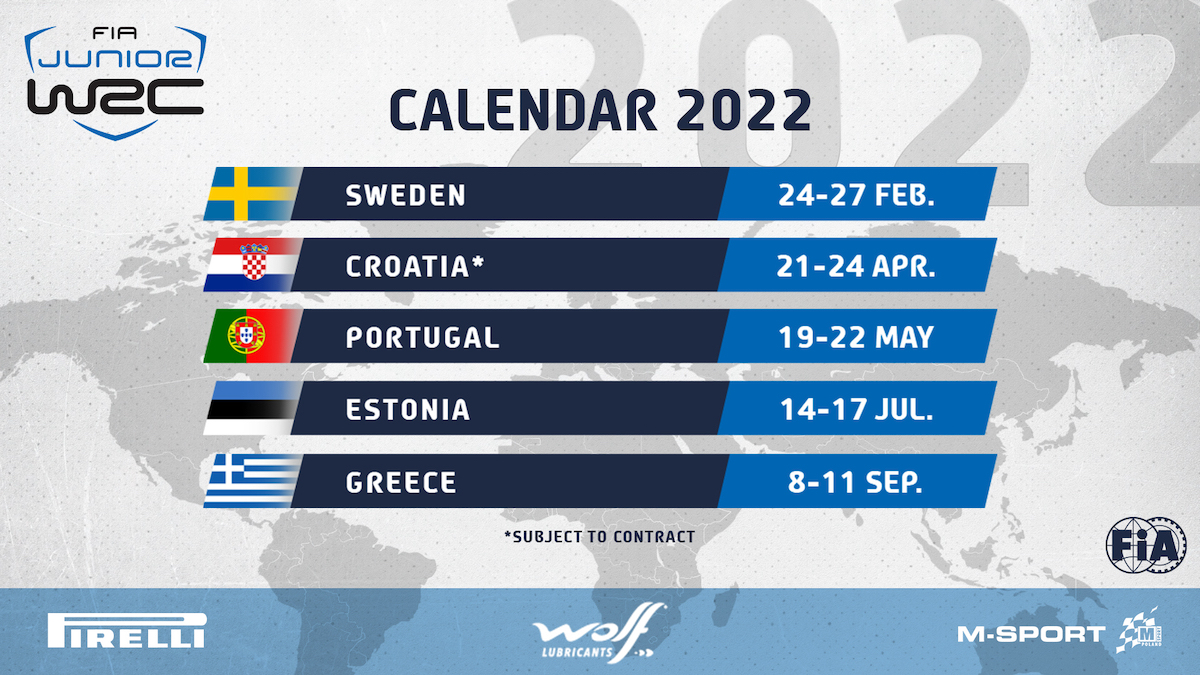 “This is the final piece in the puzzle for the 2022 FIA Junior WRC Championship. It has the perfect mixture of classic WRC events and newer additions that have already proven to be fan and driver favourites.

“Most importantly, we have worked very hard to make sure next year’s Junior WRC crews gain wide ranging experience on every surface the WRC has to offer in an effort to prepare them for their future careers.

“The purpose of the championship is to provide an accessible introduction to the WRC so a balanced and representative calendar  is of paramount importance.

“This representative calendar is now underlined by the representative experience 2022’s crews will gain by competing the four-wheel drive Fiesta Rally3, which will see a step up in performance and speed for this incredibly competitive championship.”