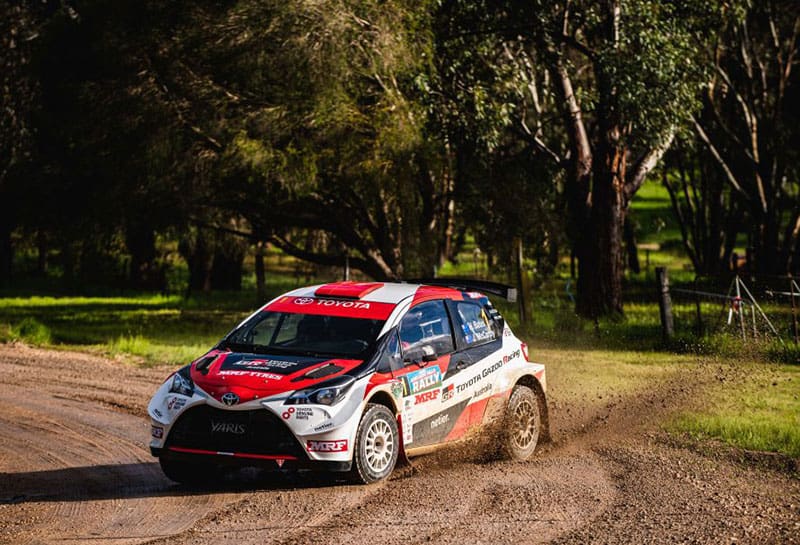 With two passes through The Bend Motorsport Park Super Special, the Bates brothers held a near 27 second lead over the rest of the field after Heat One’s forest stages.

For championship leader Harry Bates, it was a near perfect day as he seeks to clinch his first CAMS Australian Rally Championship title. Despite a broken front sway bar and late afternoon puncture preventing a clean sweep of stage wins, Bates ended Saturday in the lead.

“It’s been a great day, we’ve been happy with the consistent performance. We’ve been chipping away at it,” Bates said.

“I was hoping to take out all the stages today, but it happens. That’s why we build up a lead so we’ve got a bit of a buffer.”

Lewis Bates was engaged in a scrap all Saturday with Subaru do Motorsport’s Molly Taylor, with the pair swapping runner-up honours throughout the day’s eight stages.

“We had a strong afternoon, our plan was to hunt down Molly. I think she had some of her own issues but we certainly picked up the pace. It’s nice to finish the day with a stage win,” Lewis said.

“It’s unfortunate about our spin but that’s okay, Harry did a great job today. They set the pace all day. We’ll go out there tomorrow and see what we do.” Taylor was happy to come away with a solid haul of points, as she seeks to hunt down runner-up honours for this year’s title race and keep her mathematical championship hopes alive.

“It’s been a frustrating day to be honest. We had great glimpses of potential again, but we want to realise it,” Taylor said.

“Not a terrible day, we’re still in third but it’s not where we want to be. Everyone’s pushing hard, there’s no room for no things to go wrong… everything will be singing tomorrow.” AGI Sport’s Luke Anear had been sitting in fourth for some of the day, and matching the pace of the Toyota and Subaru factory entries, but was missing top-line speed in the fast Adelaide Hills roads. In ARC 2WD, Selley leads the way aboard the mighty Ford Escort Mk2 ahead of Wayne Mason, Simon Hoff and Jason Lennane.

Sunday’s Heat Two will see ten stages and approximately 100 kilometres of competitive stage action to determine the outright winners for the 2019 edition of the Adelaide Hills Rally.