An internal CAMS investigation is underway into the incident at Rally Australia that saw the crew of Mark Pedder and Dale Moscatt penalised for booking into the final stage early.

Mark Pedder was on track for his first ARC win until the final stage at Rally Australia.The investigation has been ongoing since Rally Australia concluded last November, and is being run by an independent CAMS Integrity Officer.

According to Australian Rally Championship spokesperson, Katie Philps, the investigation is looking into what happened at the start of the final stage, but the outcome will NOT affect the result of the 2016 championship.

Molly Taylor and Bill Hayes secured the 2016 ARC crown on the last stage, after the error by the Pedder/Moscatt team.

It is not known when the investigation will be concluded.

The 2017 Australian Rally Championship gets underway in March with the Eureka Rally, based in the Victorian goldfields city of Ballarat. 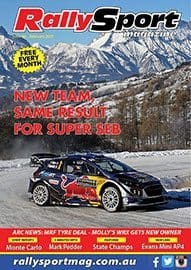