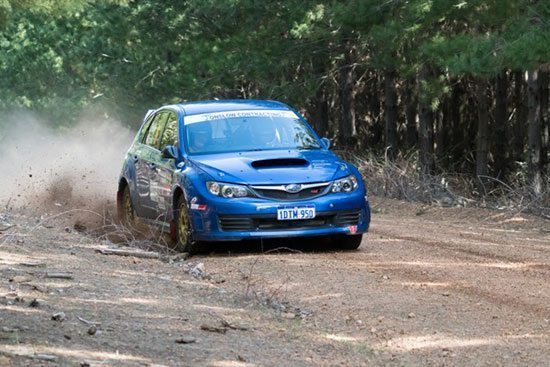 The Wheels on Yirrigan Kumbo Tyre Kirup Stages rally, the penultimate round of the CAMS Onslow Contracting Western Australian Rally Championship (WARC) on Saturday proved to be a challenge for competitors with spins, offs and punctures abound.

In near perfect conditions over 100 competitive kilometres on six forest stages in WA’s south west, competitors pushed hard to finish fastest to secure hopes of a championship title. Going into the rally, just 32 points separated the top three competitors.

After a 40-minute delayed start due to a radio repeater system issue, competition got underway and last year’s State Champion, Dylan King and co-driver Lee Tierney, dominated to win the first four stages before suffering a mechanical failure in their 2006 Subaru WRC STI in Stage 5 forcing retirement.

Winning his first ever WARC event, Stephen Oxley and co-driver Mike Wood had a few dramas in the last stage, getting caught in dust and overshooting a few turns, losing time.

“I was surprised that we won given how much time we lost in the last stage, but thrilled nonetheless – there’s been plenty of times I’ve been the bridesmaid, so it’s great to finally get a win,” Oxley said.

“It’s a well organised event with good stages – we had a great day, besides a spin at the end of stage one and the last stage which was stressful – getting a win has brought our championship chances alive, which is exciting.”

Oxley said he was happy with how his Subaru WRC STI performed given he is running a standard engine and synchromesh gearbox that isn’t as fast as some of the worked gearboxes run by other competitors. 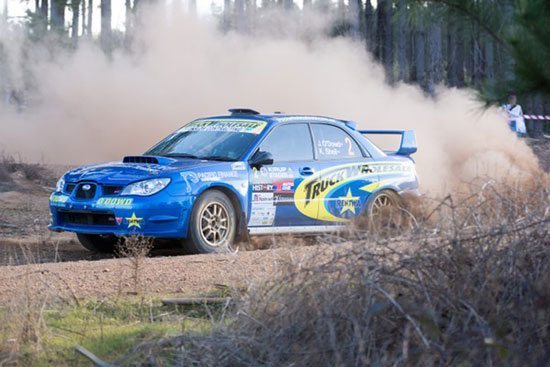 In second place and maintaining second place in the WARC, was John O’Dowd and co-driver Ken Sheild who also had their fair share of drama.

“It was a tough day at the office,” O’Dowd said.

At the first service, a hole in the casing of the rear differential was discovered and a quick decision was made to replace the complete unit there and then, rather than risk patching it. Despite the successful changeover, drama ensued for O’Dowd.

“I ran wide on a corner on stage four and the back wheel of the Subaru hit a tree stump,” O’Dowd said.

After losing time during that off, O’Dowd clawed back time by winning the two final stages to claim the second podium step.

Finishing the rally in third place with their own set of dramas was championship leader Tom Wilde and his co-driver Madelin Kirkhouse in their Verandah Apartments sponsored 2WD 1993 Honda Civic.

“The Dragon stage was one of the best rally stages I’ve driven, ever,” Wilde said, referring to SS3.

“We were coming second but then on the last stage I made an error, my first major mistake of the year. It was night and I went too fast hit a bank side on popping the two left hand side tyres off the rims – it’s lucky we didn’t roll the car.

“We rolled the tyres back on the rims, in the dark, and then O’Dowd went past and we were caught in his dust. Given how much time we lost, we’re lucky to take third place.”

Wilde / Kirkhouse have won the WARC for 2WD vehicles with two rounds to go; their lead impossible to beat.

“It’s a huge achievement to win the 2WD Championship and I’ve learned a lot. Now our focus is the outright title,” Wilde said.

In their 1998 Subaur Impreza WRX STI, Brad and Roger Nowell had a spectacular off in SS2, flying through the finish they kept going, hitting a lip that saw them airborne over a tree stump to crash land in the bush, out of sight. No one was injured, but it forced retirement.

Wilde / Kirkhouse have a 27-point championship lead over O’Dowd / Sheil. Oxley / Wood trail O’Dowd by 18 points. This WARC title will be hotly contested and sets up a cliff hanger in the final round, the Carrington’s Safari Rally on 14 October, 2017. 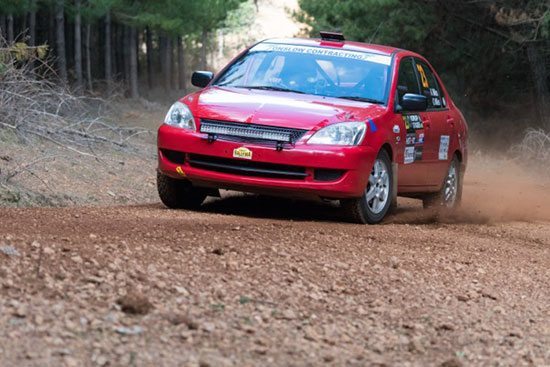 Their 144-point lead in the championship means that they are uncatchable, thus winning the 2017 WARC 2WD category with two rounds to go.

In second place 1:49 minutes behind was Gregory and Deann Flood in their 1994 Mitsubishi Lancer. Third place went to Benjamin Perard and Chris Parish in their 2009 Ford Fiesta.

Rally WA Chairman Ross Tapper paid tribute to Dr Vlad and thanked her for four years of service at both gravel and tarmac rallies in WA.

“Dr Vlad has been an asset to Rally WA and we wish her all the best in her busy career working in four hospitals in three different states as well as studying for her Masters Degree,” Tapper said.

Dr Trishna Bhalla will step into the Chief Medical Officer’s role; she comes from a rallying family in Kenya.

Clubman Cup distance was just under 65 competitive kilometres, finishing before the evening stages commenced for the WARC Outright and 2WD categories.

Graeme Miles and co-driver Kathy Miles lead the Clubman Cup from the get go, winning the first two stages, coming second on SS3 and fifth in SS4 in their 2007 Mitsubishi Lancer.

In the Clubman Masters, a new category in 2017 for seeded drivers or drivers who have won past championships, saw Julian Wright and co-driver Jeff Huggins in a 1971 Datsun 1200 take a convincing win over Dene Courtis and Robert King in a 1990 Toyota Corolla.