There’s no doubting that the competition right at the pointy end of the ECB Bullbars Australian Rally Championship is intense.

Both Brendan Reeves and Scott Pedder have shown blistering pace over the opening two rounds of this year’s championship, with the Mazda driver having won three heats to the Renault driver’s one.

Adding to this, the new Team Citroen Australia DS3 R3Ts of Tony Sullens and Adrian Coppin have shown strong pace in their debut events, signalling a promising future lies ahead of the French cars. 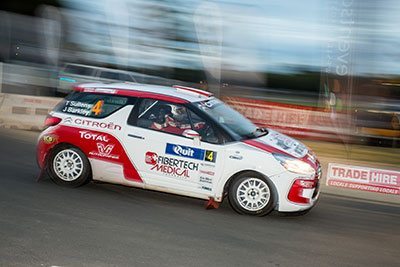 Team Citroen Australia have been a welcome addition to this year's ARC.Yet amongst all this, the championship is facing some real battles, most notably the number of entries in events.

In last weekend’s second round of the championship in Western Australia, only six crews scored points in the main 2WD championship, following on from the eight crews (from 10 entries) in the opening round in Canberra last month.

Due to the vast distances needed to be covered to reach WA, smaller ARC entry lists are nothing new, but the poor showing in Canberra - often touted as the home of Australian rallying - is of much greater concern.

There are many theories about the demise of the championship entry numbers this year. The withdrawal of the factory Honda team hasn’t helped, but is the action provided more of a concern? Certainly the in-car footage from the National Capital Rally was brilliant to watch - but that doesn’t necessarily mean it’s exciting from the outside.

Several ARC regulars we have spoken to over the past few weeks have lamented that the cars are “boring to watch” and that the ARC is “on its knees”, with one even suggesting the championship needs to go back to turbocharged, four-wheel drive cars to spice up the action.

These are questions that have no doubt been seriously debated by ARC power brokers, and at the moment they see the current category as the way to move forward.

Whether that is the case remains to be seen, but one thing seems certain - the ARC appears to have a steep climb ahead of it, before it crests the rise and enjoys the fast, flowing downward slope to the glory days again.