Victorian rally driver Hugh Bell is well remembered for some incredible performances at the wheel of a Mazda Rotary-powered Datsun 1600 in the 1980s, but he wasn’t the first driver to shoe-horn the motor into a 1600. That mantle goes to South Australia’s Barry Lowe, who can be credited with creating the hybrid – soon to be known as the DAZDA – thanks to the 1977 London – Sydney Marathon. Lowe’s car (and others like it later) proved so successful that the Confederation of Australian Motor Sport (CAMS) eventually banned rally cars with engines from another manufacturer. Yet in its glory days, Lowe took it to victory in the both the 1982 and 1983 South Australian Rally Championship, despite the intention that the car was to be a daily driver. Barry Lowe takes up the story: “After a number of years preparing rally cars for the likes of South Australians Tom Barr-Smith and Dean Rainsford, either by chance or, as my now ex-wife might say, good planning, I ended up owning a Datsun 1600. “At the time, working at the local Citroen dealer (Chateau Moteur) in Adelaide as a motor mechanic, I purchased at the right price the above-mentioned 1600 that was traded on a new Citroen, with the intention of using it to teach my wife the art of driving. 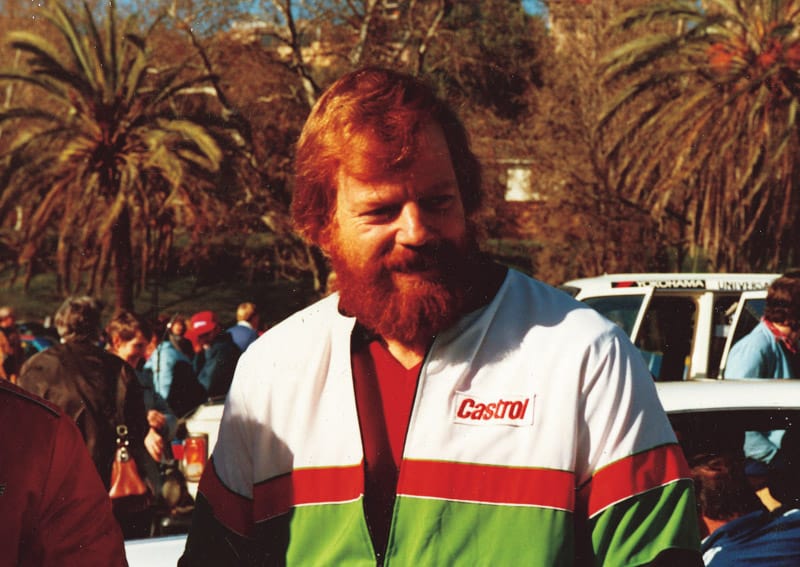 South Australian Barry Lowe had the driving talent to match his hybrid Dazda.

“As she had never driven and repeatedly stated she never intended to, it was with great trepidation she attempted, unsuccessfully, to negotiate her first driving lesson (the dents were only minor compared to the "I told you so" that was heard two blocks away).

“What a stoke of luck; here I was, a total rally freak, with a now-unused Datsun 1600 taking up driveway space. It didn't take long to realise the fate that was in store for it.

“As a father of three children, on a motor mechanic’s wage and without the now obligatory ‘rich daddy’ willing to pour in bags full of money, I spent the next six months or so scraping together enough bits and pieces to make it happen. “If it wasn't for the 1977 London to Sydney Marathon, my dreams of becoming a rally driver may never have eventuated, as it was the Citroen team who helped me out enormously by leaving behind in Adelaide (after servicing their cars at Chateau Moteur) about a dozen new 14" rally tyres. 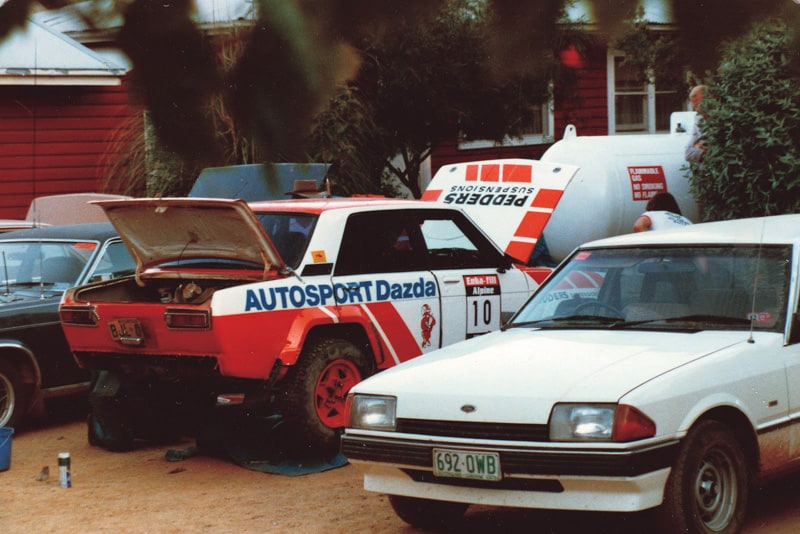 Lowe's Autosport Dazda being serviced during the 1984 Alpine Rally in Victoria.

“With that expense out of the way, the limited funds I had were put to good use in other areas. “A third outright in my first event, the last round of the 1978 South Australian Rally Championship, the Green & Gold Experts Trial, only increased my enthusiasm for rallying. “However, the next two events had me realising that this rally driving wasn't as easy as I thought. Having rolled the car within sight of the finish control on my second event and breaking a crankshaft while leading on my third, once again funds were low. “It was over a couple or four beers in the Brecknock Hotel that the idea of fitting a 13B Mazda rotary engine into the now engine-less 1600 was first thought of. At that time, the cost of extracting the required horsepower from the Datto engine was way out of reach.

“In contrast, getting a reliable 280bhp from a 13B was a far cheaper option. Hey presto, the DAZDA was conceived! 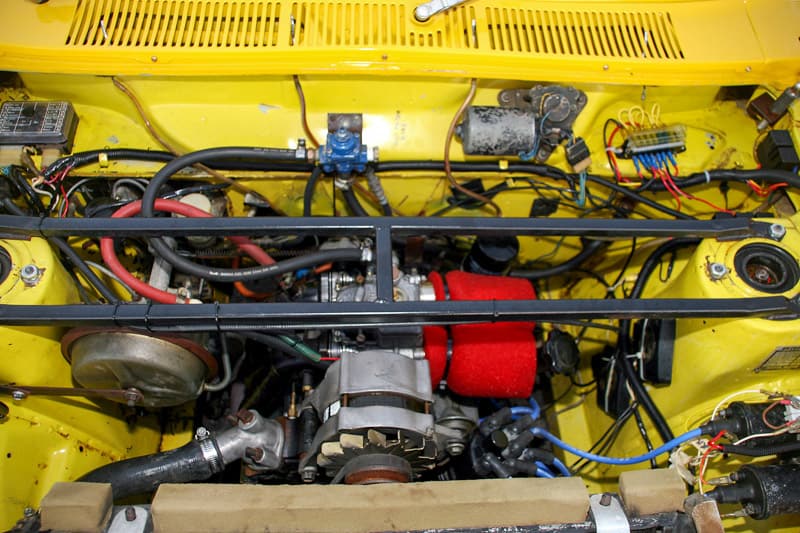 “My next step was to get the local traffic authority to agree to the engine swap. This was made a whole lot easier by the ‘engineer’ overseeing my application, when noting that I was reducing the engine capacity from 1600cc to a tiny 1308cc, stating: ‘This won't be a problem, you are going backwards’. “A few months later, the DAZDA hit the forests. At first it didn't make a great impact, with reliability being a factor. The extra horsepower now on tap brought its own problems, gear boxes, diffs, driveshafts, half shafts and trailing arms all failing at different times over the next couple of years. “By 1982 all these problems had been sorted. It was with great pride that the concept, thought of a couple of years earlier, had proved successful, resulting in winning the 1982 and 1983 South Australian Rally Championships. 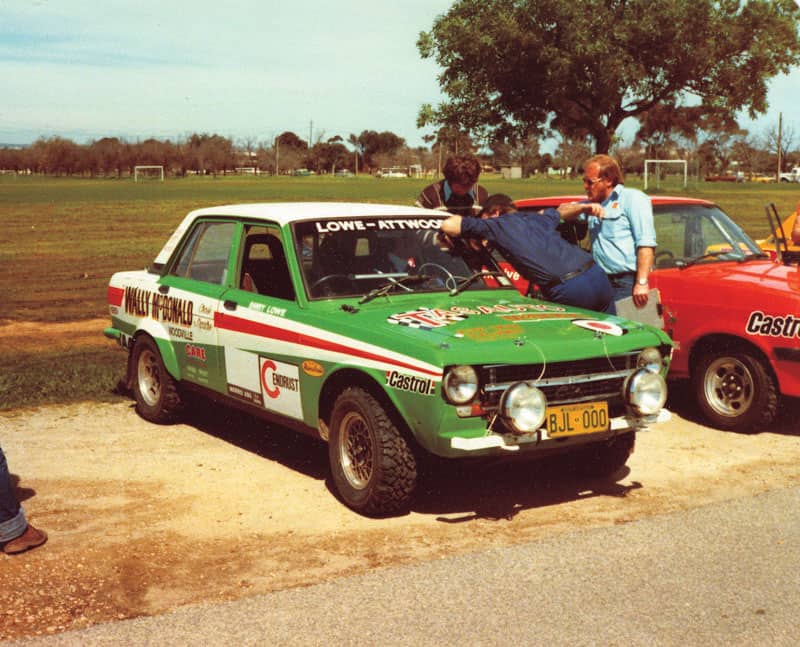 Lowe's Dazda appeared in many liveries, including this variant at a round of the SA Rally Championship.

“As well as competing in South Australia, the DAZDA made people take notice by showing good potential in both the Castrol International Rally in Canberra and the Begonia Rally in Ballarat. “Within in a short time several other DAZDAS were competing in most states. It didn't take long after this for DAZDAS to be banned. It was deemed bad for the sport when manufacturers were not able to promote their product.

“For this reason, CAMS ruled that motors of different manufacturer were no longer allowed to be fitted, and as a result, the DAZDAs were buried in the mid ‘80s.

“As a bit of a protest against these rule changes, in 1987 our team put together the one and only MAZUBA, a 13B rotary-powered Mazda R100 (it got around the rules by having a motor from the same manufacturer) with Subaru four-wheel drive running gear. “But that's another story.” 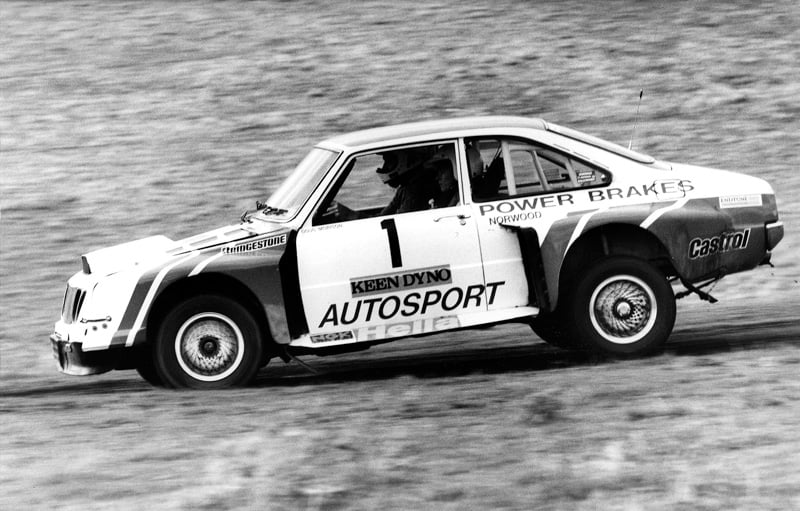 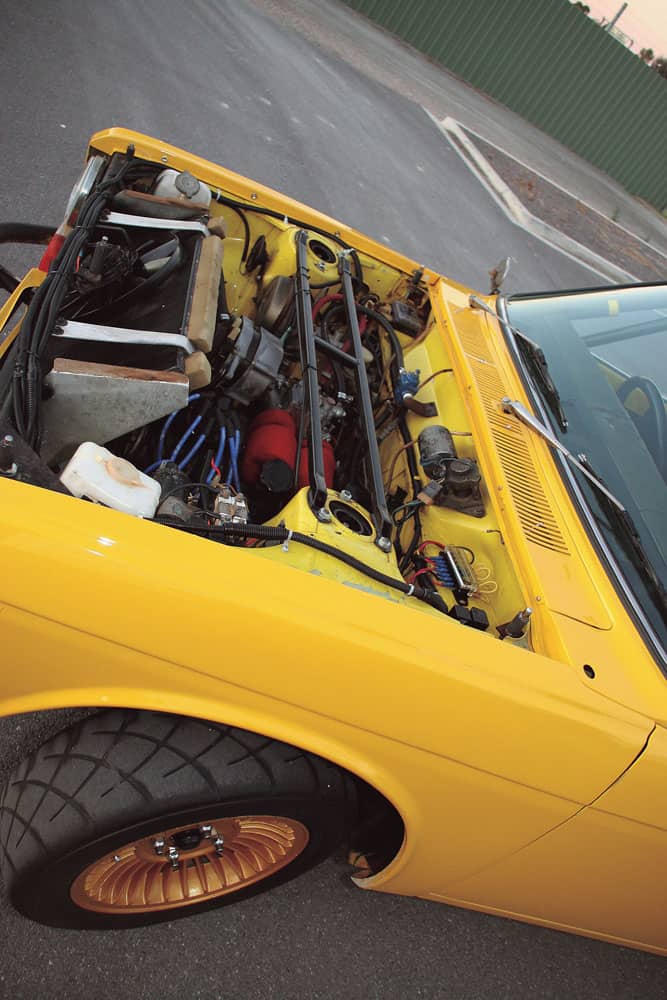 DAZDA specs (from what Barry remembers ….)