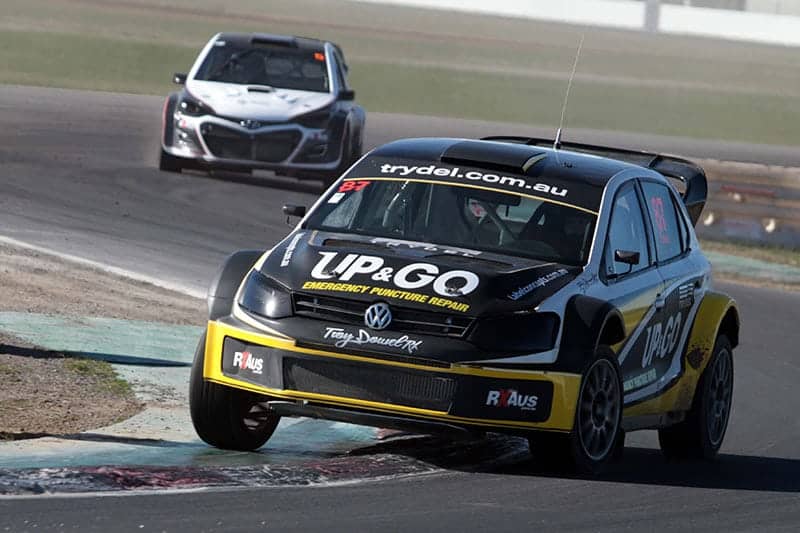 Troy Dowel started from pole position to win the rallycross event at Winton.

Troy Dowel and Arron Windus have battled for victory in the opening heat race at Round 3 of the RXAus.com.au Australian Rallycross Series today at Winton Raceway in Victoria.

Meanwhile, Will Orders opened his two-wheel-drive account in style with a dominant victory in his Ford Fiesta.

Dowel started from pole position and elected to take the joker lap immediately, Windus following suit as the remainder of the field battled on the regular lap.

The quicker Joker lap gave the two a comfortable early lead which they then used to entertain with an intense battle for the remaining laps.

Windus closed on the last lap however couldn’t work his Hyundai I20 RX car past Dowel’s VW Polo, finishing within a car length of the teenager.

The former Targa Tasmania winner made up two places from his starting position to comfortably grab the final spot on the podium, and within shouting distance of the two open-class cars in front tomorrow.

Missing out on that action was Darren Windus, who struggled with fuel pressure problems in his I20 RX.

Arron Windus had originally been scheduled to drive the red Hyundai however swapped cars with Darren prior to the first heat, with his championship challenge in the front of his mind.

Windus Snr started second thanks to a strong qualifying effort however dropped out of the race after the issues reared their ugly head during the race, the team working to solve the issue in time for tomorrow’s racing.

Behind Glenney, Cahal Carey held out RXAus rookie Luke Anear and Ronnie Bustard in a battle of the Mitsubishi Lancers for fourth, fifth and sixth places. 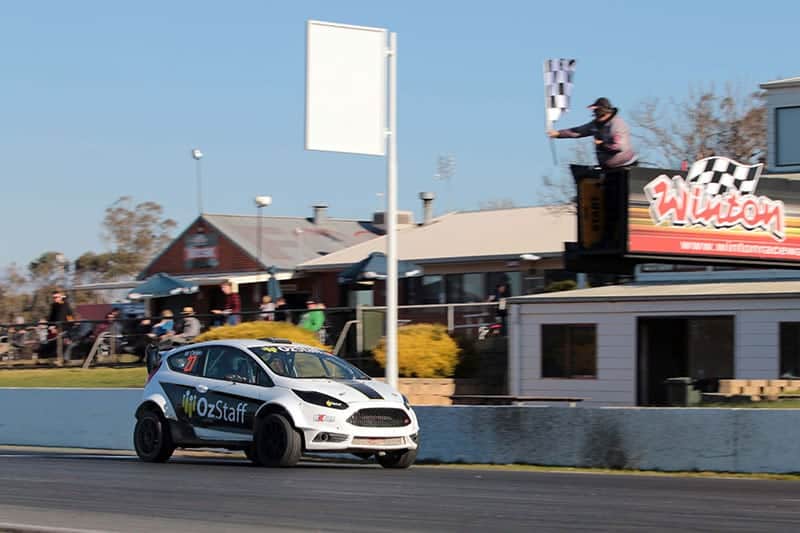 Will Orders had a comfortable victory in the two-wheel drive category at Winton.

In two-wheel-drive, Will Orders powered to a comfortable heat race victory, edging away Mitsubishi Mirage driver Zac Edwards and Excel ace Fionnan McCallan to open his weekend account in style. Matt Lee finished fourth in his Commodore, staying in touch with the lighter and nimbler front-wheel-drive cars.

Missing in action was Justin Dowel, who was set to drive the Millington Ford Escort used to great effect by Will Orders during the last round.

Unfortunately, the defending all-wheel-drive champion failed to start after the team diagnosed a steering issue on the stunning Escort, with the car set to return tomorrow.

The third round of the RXAus.com.au Australian RallyCross Championship continues tomorrow with two heat races, semi-finals and the finals all on a packed program at Winton Raceway.