Declan Dwyer and Craig Adams have given us the third winner in as many rounds in this year’s MRF Tyres South Australian Rally Championship. It was the EVO VI crew’s first rally since last year’s Lightforce Rally SA, which they also won. In a different form of motorsport, Dwyer had won the motorkhana in the Hay Mini Nationals for the ninth time back in June, driving a Mini Moke. The Copyworld Walky 100 Rally, held on August 11, moved from its traditional Robertstown base 21 km south to Eudunda for the 34thrunning of the event. It still used some of its tried and traditional stages, as well as adding some new ones further south. 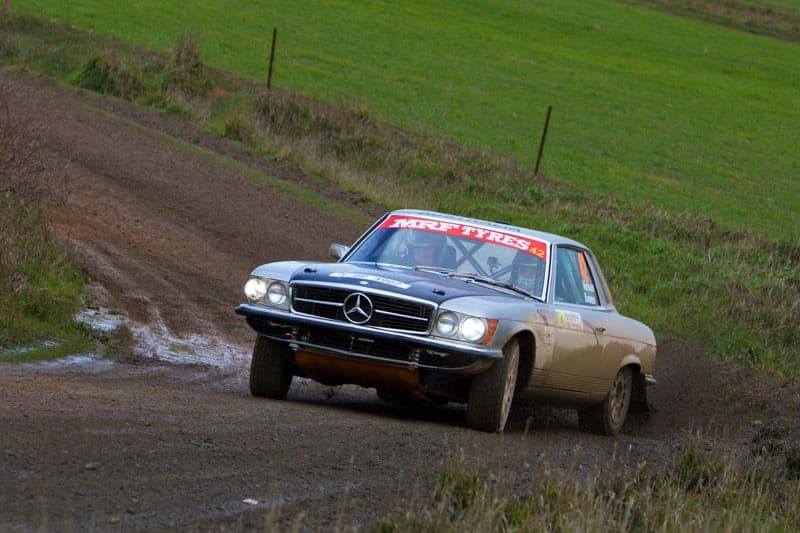 Stuart Bowes couldn't match the pace of the 4WDs in his Mercedes. Photo: Matt Talbot

Unfortunately the two runs of Frankston, featuring the famous Dutton Bridge, used decades ago in ARC events, had to be cancelled due to flooding. After a very dry S.A. winter, crews and officials were greeted by rain, hail, high winds and freezing temperatures on the day. Winning the Walky 100 for the third successive year, and five times in total, Dwyer and Adams finished 48 seconds ahead of round 1 winners Zayne Admiraal and Matthew Heywood (Subaru WRX) with Matt Selley and Hamish McKendrick, a further 19 seconds back in their Connaught Warrior-powered Ford Escort Mk II, also first 2WD. After problems on the first two rallies (clutch failure and a spin and stall) it was great to see Selley fulfil the Escort’s promise. Reigning S.A. Champions Aaron Bowering and Heath Weedon (Subaru WRX) were fastest on the opening One Big Hill before Dwyer went quickest on the following Roast Reverse and Julia. 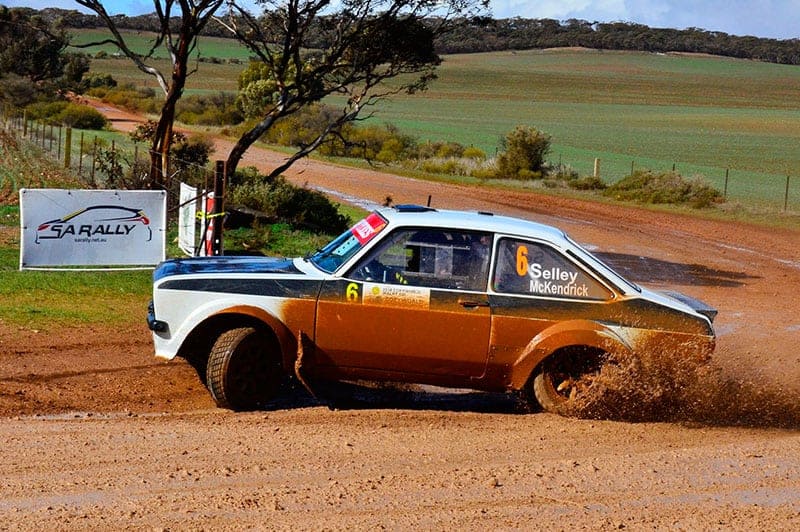 Matt Selley’s Escort during a patch of sunlight on One Big Hill. Photo: John Lemm

On the reruns of the three stages, Admiraal was quickest, moving within 2 seconds of Dwyer. On One Big Hill 2, Craig Haysman and Julie Boorman’s Triumph TR7 V8 lost around 6 minutes with an ignition problem, which occurred intermittently for the rest of the event. Julia 2 saw fourth-placed Jamie Pohlner and Ken Moore’s Subaru WRX get an airbox full of mud and losing all power. Fourteen minutes were lost with what they thought was water in the electrics. After solving the problem in the following service, they set rapid times, but eventually finished a disappointing 19th. Bowering, who had been second in the SARC pointscore, retired on the following Leakes Pass with a cracked sump, dropping him way down to 8thon the table, whilst Admiraal’s time brought him up to share the lead with Dwyer. 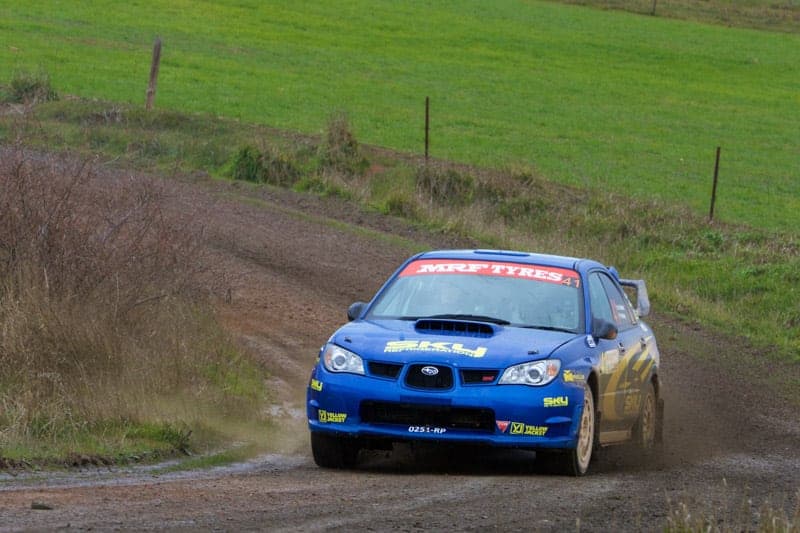 Dwyer then went a second quicker on the following Smith Road, with the pair tying for fastest on Tableland. Admiraal incurred a 40 second service penalty, putting Dwyer out of his reach, the latter marginally fastest on the first two reruns of the three stages before the pair tied on the final Tableland 2. Finishing fourth, 40 seconds behind Selley, was the WRX STi of Shane Alker and Karien Heimsohn, with round 2 winners Peter Schey and Kate Catford (WRX STi) 27 seconds behind in fifth. Provisional pointscore: 1. Peter Schey/Kate Catford 143, 2. Zayne Admiraal/Matthew Heywood 114, 3. Stuart Bowes/Mark Nelson 92, 4. Dale Cagney/Mark Dycer 90.5, 5. Paul Heenan/Andrew Kriesl 87, 6. Shane Alker/Karien Heimsohn 82.5. The final round of the MRF Tyres S.A. Rally Championship is the BOTT Adelaide Hills Rally on September 21-23, also the fifth round of the Australian Rally Championship. 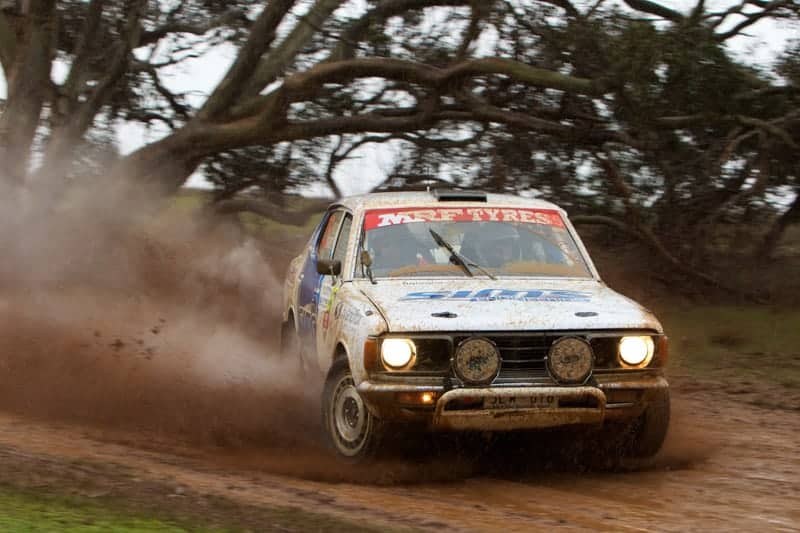 Jason Sims battles the grip levels in his Datsun 180B. Photo: Matt Talbot 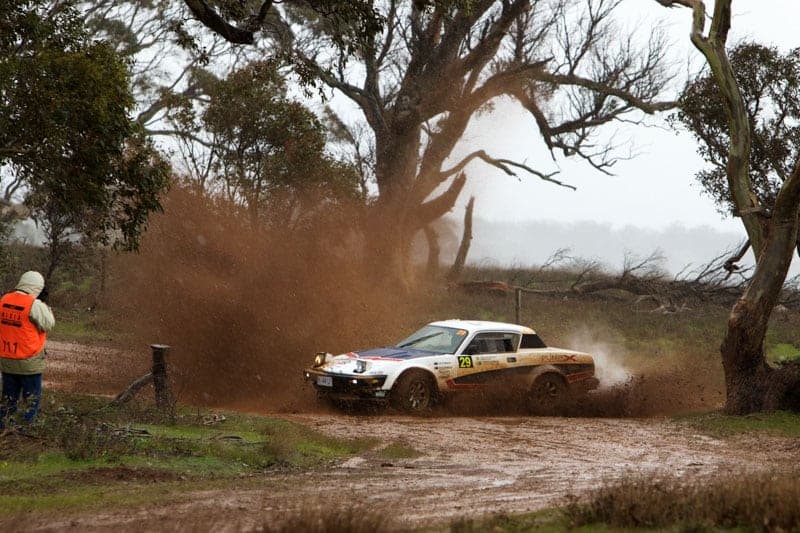 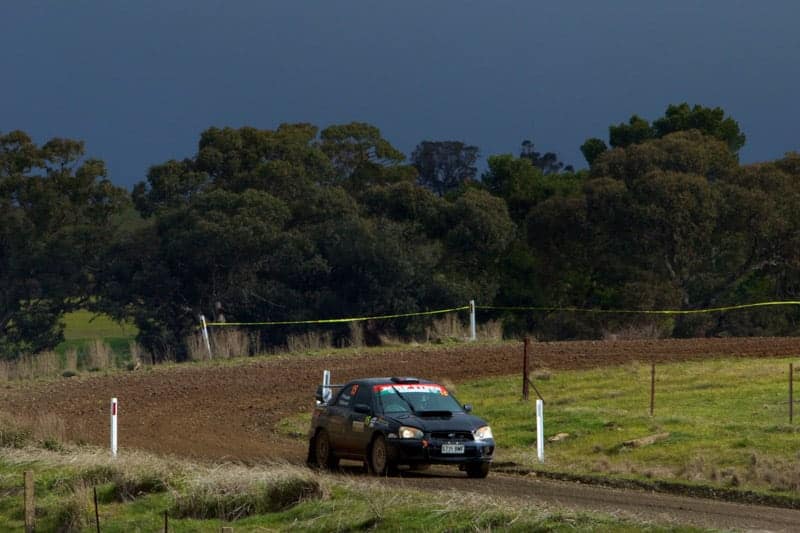