Eli Evans and Ben Searcy have claimed the 2018 CAMS Australian Rally Championship in an event of see-sawing fortunes at Kennards Hire Rally Australia. Steve Glenney and Andy Sarandis took the outright win at the three-day event but it wasn’t enough to wrest the title away from Evans and Searcy, who finished with a 19 point advantage. More than 83,000 people attended the three-day event, witnessing Evans win his fourth Australian Rally Championship and Searcy his first. “This one had more twists and turns and I didn’t know who was going to win it even though I had a good points lead coming into this event,” Evans said. “It was a strange year but between the top three teams, it was awesome, we pushed each other to the limit all year and I’m pleased that we managed to hang on for the Australian Rally Championship.” 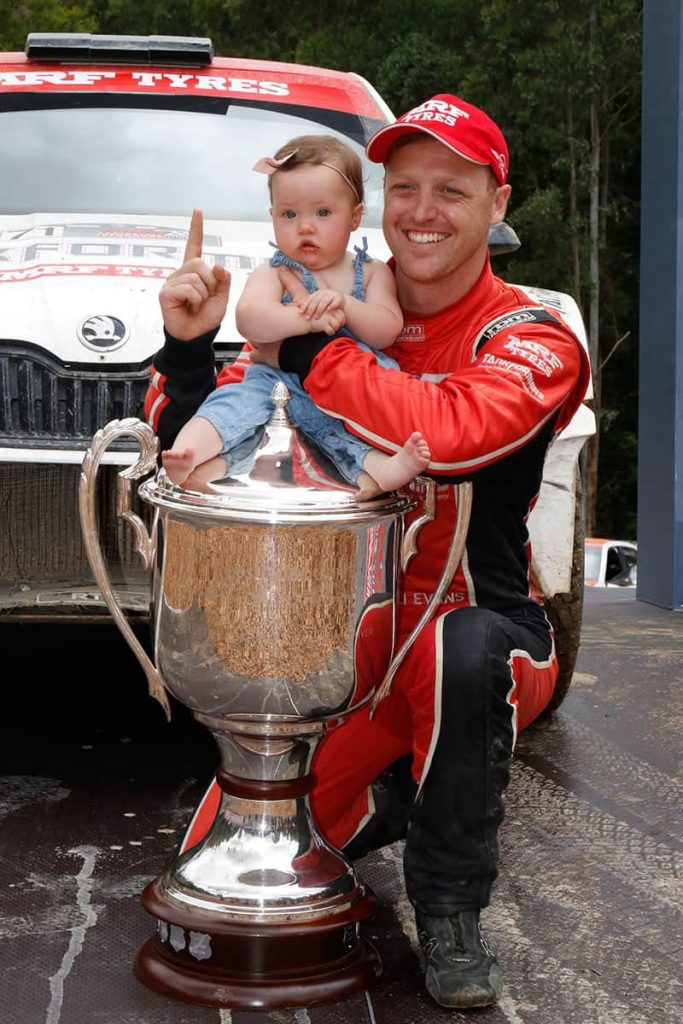 Eli Evans celebrates with his daughter at the podium. Photo: Peter Whitten

Evans was full of praise for Searcy. “Ben’s a good co-driver he’s like an ice-man, nothing phases him and his timing on the notes is spot on… and for him to be able to deliver them at speed all the time gives me confidence to drive fast. Her was exceptional this year.” For Searcy, finally winning his first Australian Rally Championship was super sweet. “It was amazing, it’s great. I’ve come so close the last two years in a row, to finally actually get one, it’s awesome, I’m stoked, really happy,” Searcy said. Things looked grim for Evans when he damaged the radiator on the Skoda Fabia R5 early on day one but two strong performances on the remaining days, and the high attrition rate as competitors succumbed to the tough Coffs Coast conditions, allowed him to finish fifth outright and gather enough points for the title. Evans fended off a strong challenge from Toyota Gazoo Racing Australia’s Harry Bates and John McCarthy, which ended prematurely with the Yaris AP4 suffering engine issues on day two, and from Glenney, who’s outright win was still not enough to bridge the points gap to Evans. 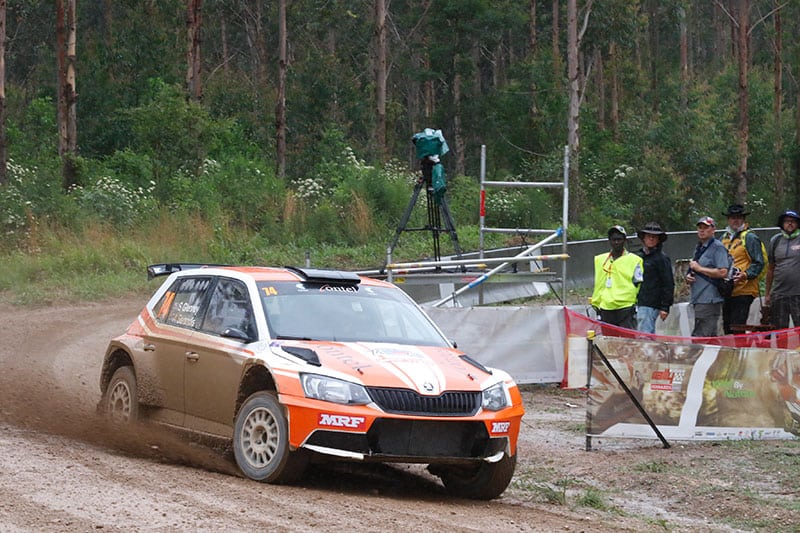 For Glenney, who returned to the ARC as a driver this year after a time focusing on tarmac rally events, the Rally Australia round win was his first since 2006. “It’s fantastic, it’s been a huge year and a great privilege to drive the Contel Communications Subaru and then to step up to the R5 for this event was a great experience for all of us,” Glenney said. “I’m really thrilled to give Craig, our excitable team leader, a reward for his efforts this year and for the trust he puts in us to drive his cars.” Second outright were rally rookies Luke Anear and Jon Mitchell, the duo doing a stellar job to keep their Subaru Impreza WRX STi out of trouble. Rally Australia was only Anear’s third gravel rally. “I don’t think I’ve come to terms with what we have done yet, its pretty amazing, trying to stay alive out there was the hardest thing,” said Anear.

“Every corner was just so treacherous and rain was coming and then it was going and then you had grip and then you didn’t so I was just taking it one corner at a time.” Andrew Penny and Rhys Llewellyn rounded out the podium in third place, the achievement a long time in the making for Penny, who had previously finished Rally Australia just once from five attempts. Their efforts also see them secure the CAMS ARC2 Championship, in what was a winner takes all final on the Coffs Coast. “The angle was to actually just finish and everything came into place and I think the ARC2 thing actually helped us out because we knew we didn’t have to set a big pace and keep up with the big boys and set our own pace.” In Rally Australia's 2WD class, Lindsay Collits and Brad Dawson claimed first in class in his Holden Commodore Ute, with Kevin Raedel and Anthony Carr second in the Ford Falcon and Ben and Cathy Hayes third in their Holden SS Commodore. Despite not finishing this weekend, Adam Kaplan and Aleshia Penney had enough points to claim the CAMS Australian 2WD Rally Championship.