Eli Evans is confident that his brand new AP4-spec Mini Cooper will make its competition debut in Canberra, despite the car’s fuel injectors having still not arrived.

Eli Evans will debut the new AP4 Mini at the Nat Cap Rally. (Photo: John Doutch)The delay in the injectors arriving from the United States have delayed the car’s debut so far, and the three-time Australian Rally Champions has been forced to drive a rented Peugeot 208 in the first two rounds of the series.

“We thought the injectors would have arrived by now, but we now expect them on Monday next week,” Evans told RallySport Magazine today.

“We’re going to run the car on E85 fuel with direct injection, so it’s not just a case of using any injector.

“We needed to choose a specific type of injector and then have it assembled in the USA.

“At this stage, the plan is to tune the car early next week, and then test it late in the week, all being well.”

Evans Motorsport have a back-up plan should the injectors not arrive, or if the tuning of the engine is more problematic than expected.

“If we have any hassles we’ll run the car on race fuel,” Evans explained, “but our plan is certainly to use E85 fuel.”

Interestingly, the car will use around 30% more fuel running on E85. 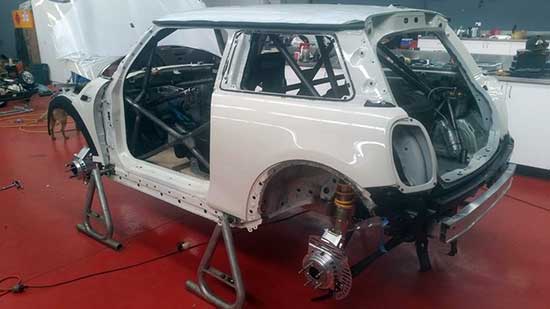 In the delay since the car’s initial debut was scheduled, team manager Jesse Robison has installed perspex windows in the Mini, a job which has proven to be time consuming.

“It’s taken a lot of work, because by doing this we also needed to put FIA-spec foam into the doors, so it’s been quite a job.

“But we’re keen to save a few kilos where we can,” Evans said.

While he is yet to drive the car in anger, Evans is looking forward to the car’s debut, and the team have already sorted some small steering issues that emerged, just from driving the car around in a car park.

“I can’t wait to drive it. The engine sounds fantastic just running at 65%, so I can only imagine what it’s going to sound like at full noise when it’s running properly.”

Evans is the top seed in the Australian Rally Championship field for the National Capital Rally in Canberra, which runs over the weekend of May 27 and 28.