Victory was achieved by Sebastien Ogier exactly six months after his last and saw him take the lead in the Drivers’ series. It was Toyota’s first victory in the series in Mexico and Ogier’s first with the team. Toyota extended their lead in the Manufacturers’ series over Hyundai as their new driver line up had secured two wins in three events. Hyundai and M-Sport had challenging events, each losing one of their cars in difficult circumstances. Second place for Ott Tanak after his Day 1 indiscretion demonstrated the World Champion’s determination to defend his title. For M-Sport Teemu Suninen put in a strong consistent performance to eventually finish third having resisted Tanak until a broken brake on the Saturday afternoon made it inevitable. WRC2 and the overall R5 category (RALLY2) was won by the Skoda of Pontus Tidemand for a third time in Mexico and WRC3 by the Bolivian Marco Bulacia in a Citroen C3. Rally Mexico was held just as nations around the globe were announcing plans to defend themselves because of the spread of the COVID-19 pandemic. 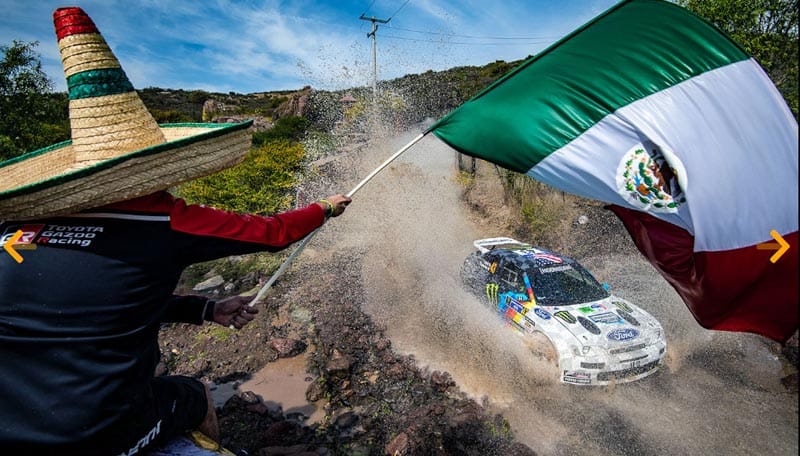 Ken Block retired from Mexico with engine problems with his Ford Sierra.

The rally eventually finished Saturday evening, run through from Thursday, the Sunday stages including the PowerStage (and its supplemental Drivers’ championship points) not held. This action was to assist travel home to Europe due to fast-changing travel restrictions. The announcement followed cancellation already of the next two rounds in the series (Chile for internal pollical reasons and Argentina also because of the pandemic situation). Ogier was writing new records and rewriting others here in Mexico. Equalling Sebastien Loeb’s record six wins, having already achieved three wins in three years with Volkswagen (2013-2015) Ogier had now won three successive Rally Mexico’s in three different cars (Ford, Citroen and now Toyota), four different makes in all. Although he was gifted the lead early on Friday through a mistake made by Tanak there were plenty of challenges along the way, Ogier: “You never know what's going to happen in this kind of rally, a puncture, so many rocks, the opportunity to keep driving very very careful, but still you have to do the job.” Toyota’s drivers faced other challenges. Leading the Drivers’ series after Sweden it fell to Elfyn Evans to open the road in Mexico on the Friday and he suffered in the dirty rocky conditions, holding fifth place most of the event, only briefly getting up to fourth – ahead of Tanak. 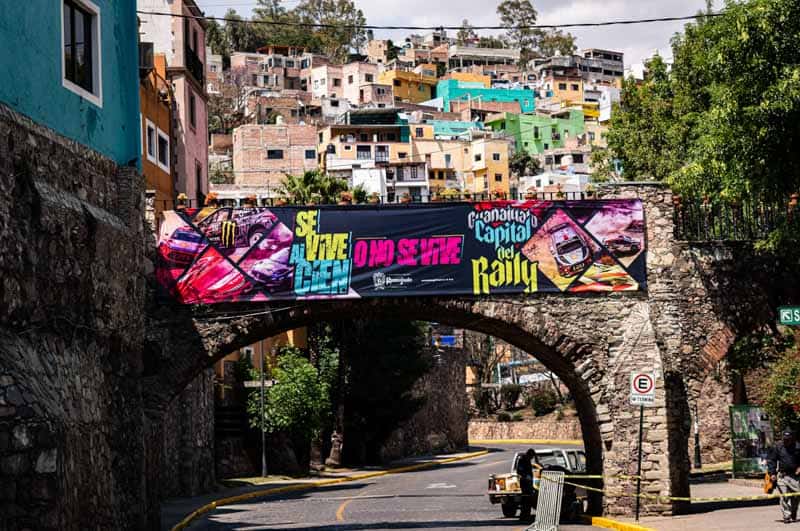 Kalle Rovanpera was experiencing only his second adventure to Mexico and running second on the road on Saturday found “road cleaning” was a new skill to be learned. Fifth place and a stage win were all the more impressive. Team Principal at Hyundai, Andrea Adamo, was monosyllabic about his drivers performances on Friday after both Thierry Neuville and Ott Tanak had been leading the rally. Neuville, like Evans, struggled in the conditions on Friday due of road position and then on stage 9 the car’s battery went flat and he missed four stages. After taking the lead after stage 3 Tanak damaged his car through a driving error, losing around 45 seconds, he dropped to eighth place. Both drivers were fortunate, they managed to continue or in Neuville’s case restart but their teammate Dani Sordo was not so lucky. Suffering a water hose problem early on the Friday morning the team’s efforts to keep the car going eventually ended in engine failure on stage 7. Adamo: Let's take something out of the day but (the day’s) not finished so I start to be scared. It's a s..t day so I hope it will finish quite soon.” Whether it was a technical problem or tactical but on Saturday Neuville incurred a 13 minute penalty for checking in late at a time control. The penalty meant he only ran first on the road on the first stage of the day and instead dropped back to run ahead of Tanak; a move which ensured they both benefitted from cleaner conditions. 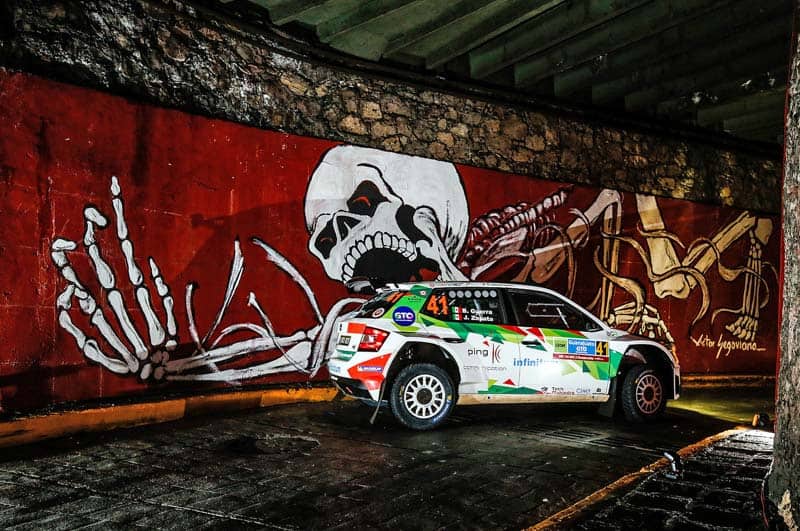 Neuville eventually proved to be the fastest driver on the rally, winning eight stages, while Tanak’s second place provided some consolation for the team. M-Sport, like Hyundai, had a very mixed event. They can take encouragement at seeing Suninen finally achieve good pace and times. “It would have been great to be in second position. We had some brake issues which made it hard to fight with Ott, but that's rallying. Even without the problems I don't believe I would have beaten Ott.” And seeing Greensmith on his first event in Mexico not only complete the route but cope with having to run first on the road after Neuville’s problem and a sensor issue on Saturday meant he was unable to retain sixth position and he eventually finished ninth. The event, however, was marred by the retirement of Esapekka Lappi after their Fiesta was destroyed in a fire. The crew arrived at the end of stage 7 with the rear of the car on fire. Despite valiant efforts to douse the blaze by crew and marshals Lappi drove the car down a track trying to blow out the flames but he was unsuccessful. Both Lappi and codriver Janne Ferm were safe but for a privately-run team such as M-Sport the loss of a car is a bitter blow. 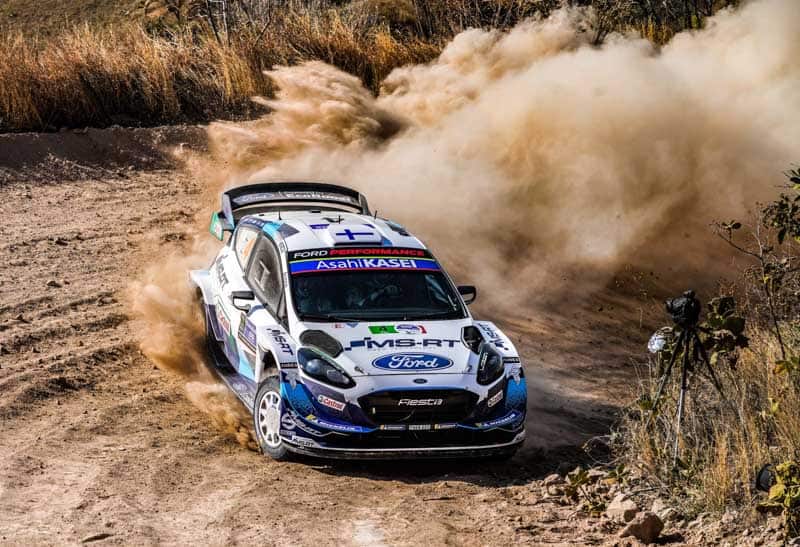 In the R5 category Pontus Tidemand dominated, leading from the start of Friday to the finish. However initially it was Oliver Solberg who took the lead in the class (and WRC3) after the opening superspecials on the Thursday evening. On the first gravel stage Solberg damaged the oil sump and retired and the lead in R5 passed to Tidemand (already leading WRC2) and in WRC3 to Alberto Heller. For both Hyundai R5 drivers this was their first time in Mexico. On the final afternoon Nikolay Gryazin had a puncture and brake troubles and Ole Christian Veiby had a spin. Both drivers finished and Hyundai Motorsport N team had gone into the lead in the WRC2 Manufacturers’ series. In WRC3 the Bolivian driver Marco Bulacia won the category in his Citroen C3 after taking the lead from Heller. Final Overall Classification – Rally México 2020 FIA World Rally Championship for Manufacturers’ Standings After round 3 2020 FIA World Rally Championship for Drivers’ Standings After round 3 All results remain subject to official FIA confirmation. 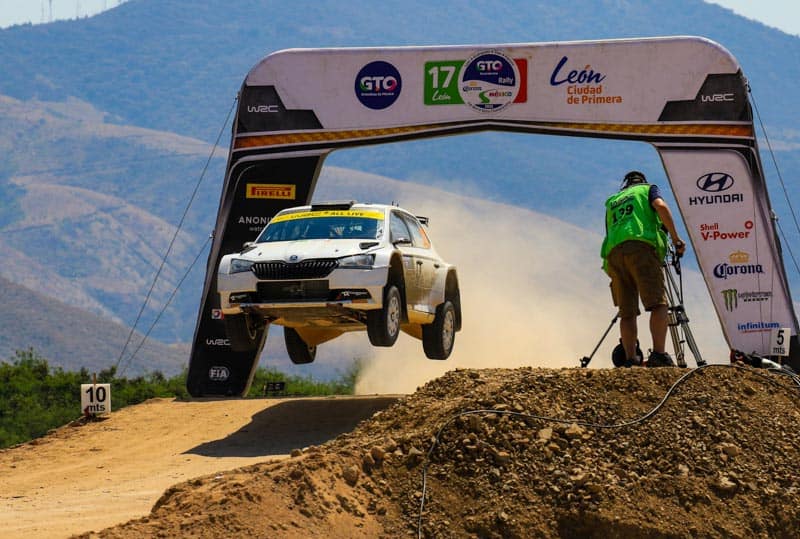 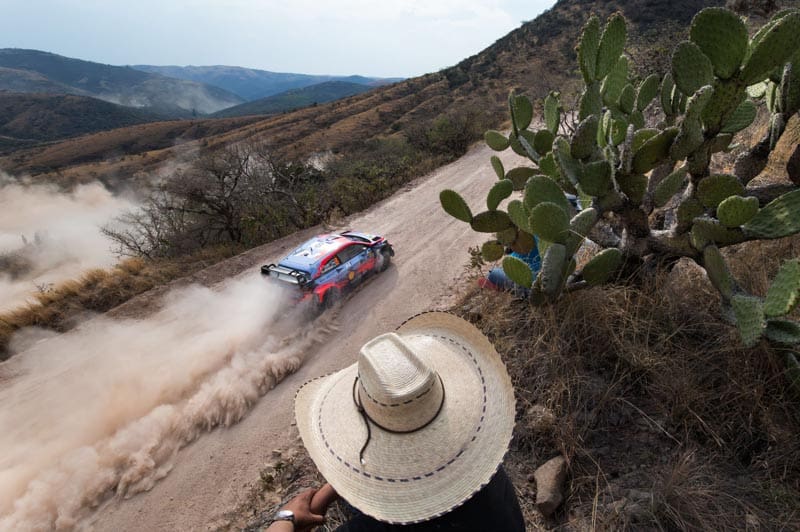 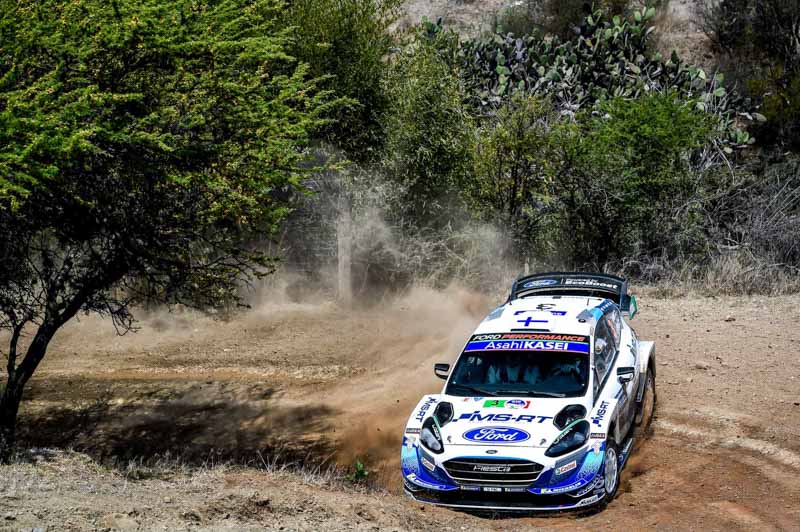 Teemu Suninen was third for Ford. 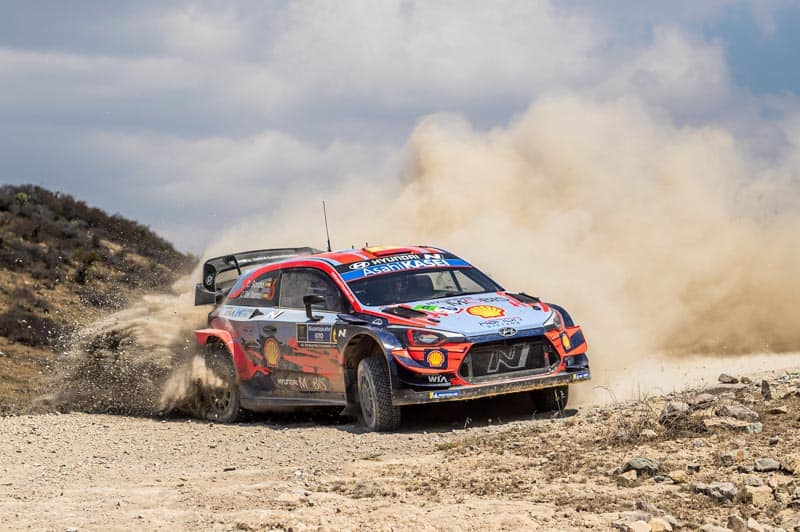 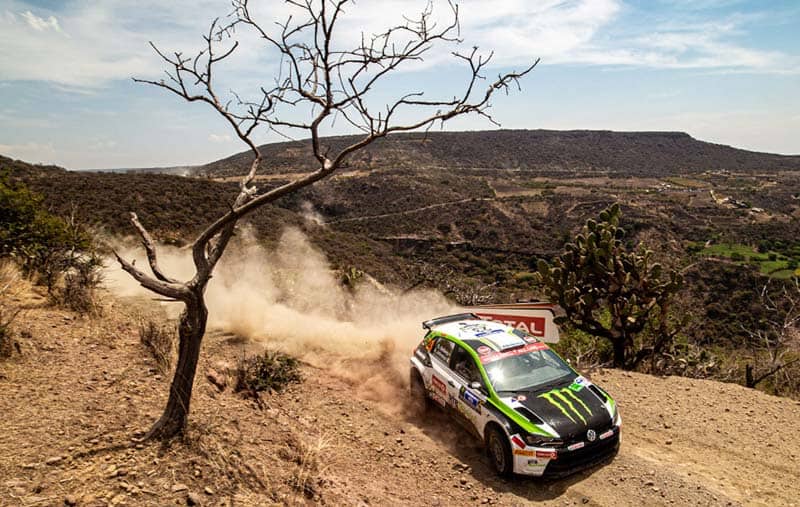 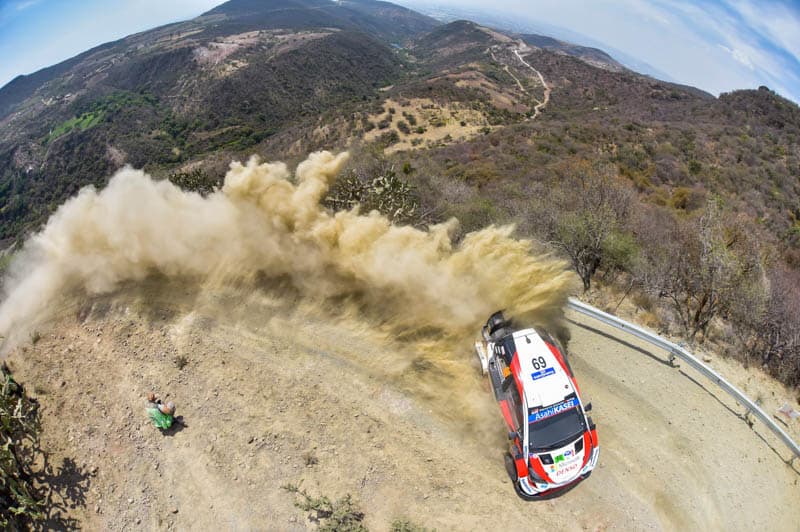 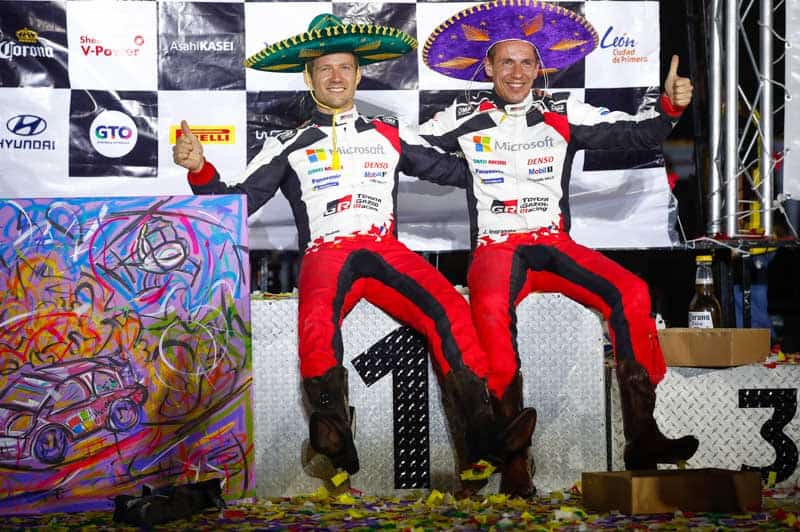 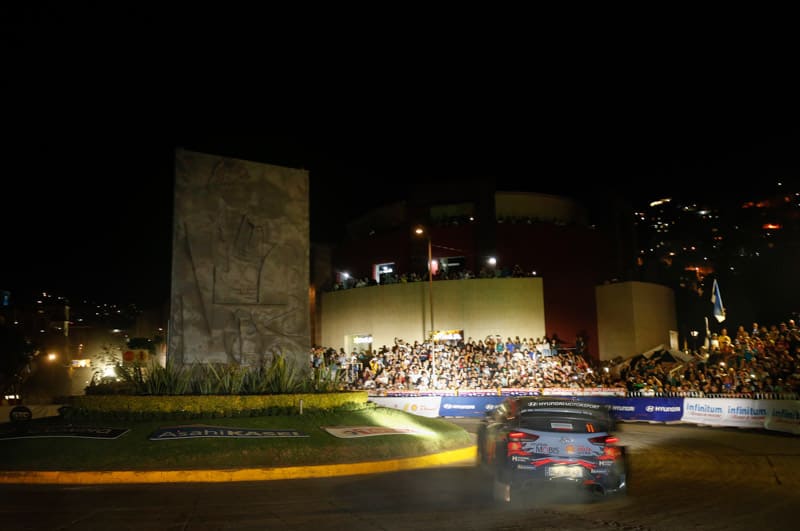 Thierry Neuville on the opening stage. 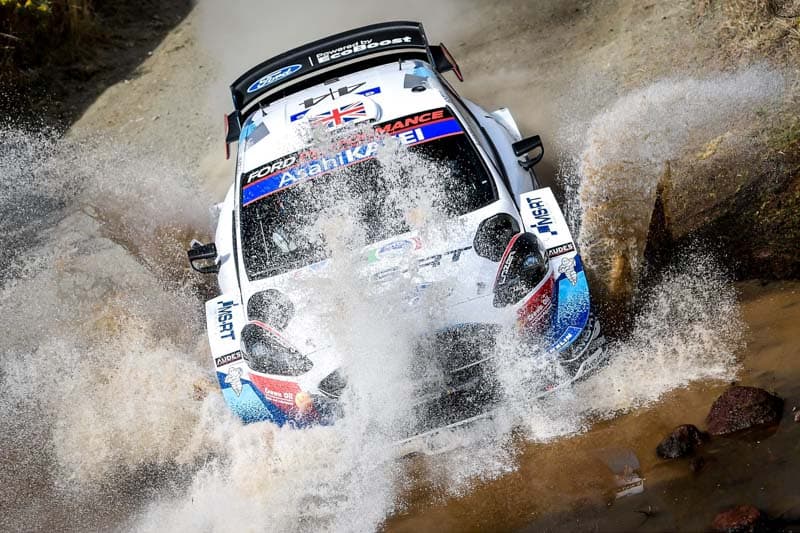 Gus Greensmith had a challenging event in his Fiesta. 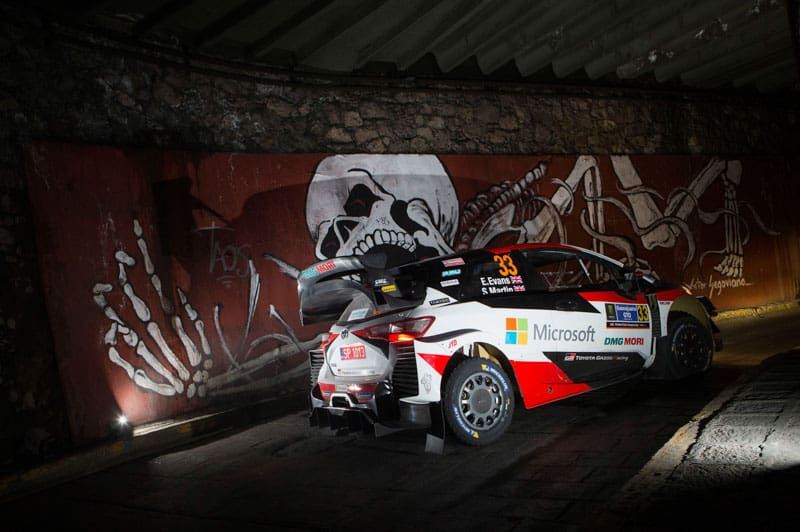 Elfyn Evans took another points haul in his Toyota Yaris. 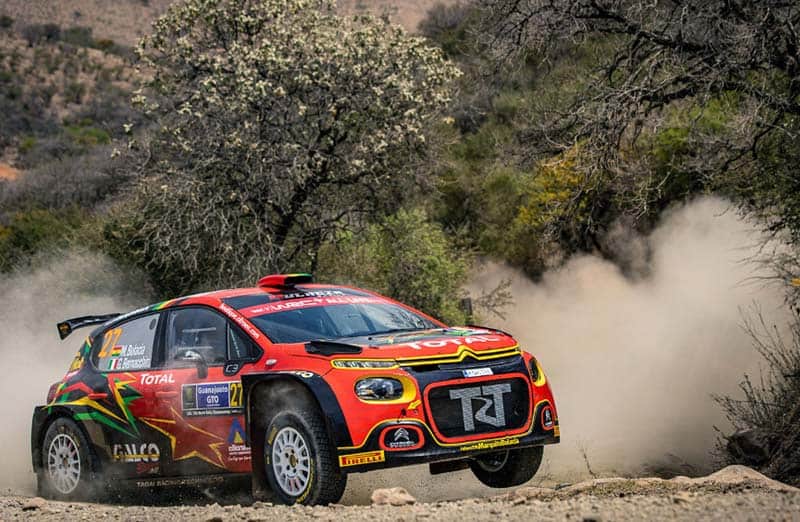