It may never have been a “works” car or competed under the factory banner, but those in the know remember JHV 260 fondly as one of Australia’s longest serving Escorts. Now, nearly 40 years later, the cars has been resurrected in tarmac trim and made it’s debut in Targa Tasmania. We’re all familiar with the old adage about grandfather’s axe – despite the old, worn out axe having three heads and six handles replaced, it’s still the same old axe! 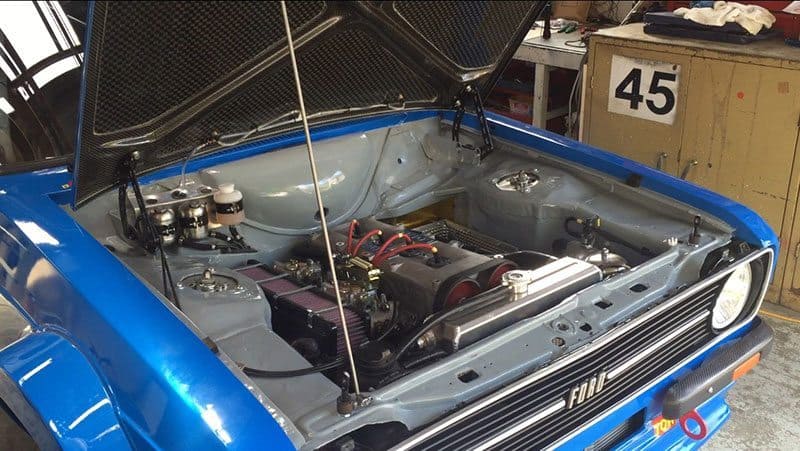 The Escort is fitted with an iconic BDG engine.

The same could just as easily be said about a number of rally cars in Australia and New Zealand that have been used competitively over many years, and although being crashed and subsequently re-shelled, are regarded as the original vehicle.

So it comes as a bit of a surprise when you learn of a particular car whose owner acknowledges that it is no longer the vehicle that first hit the forest tracks many years ago.

In other words, despite wearing the same number plates and looking like the real McCoy, there is very little, if anything, to suggest it’s anything but the same car. 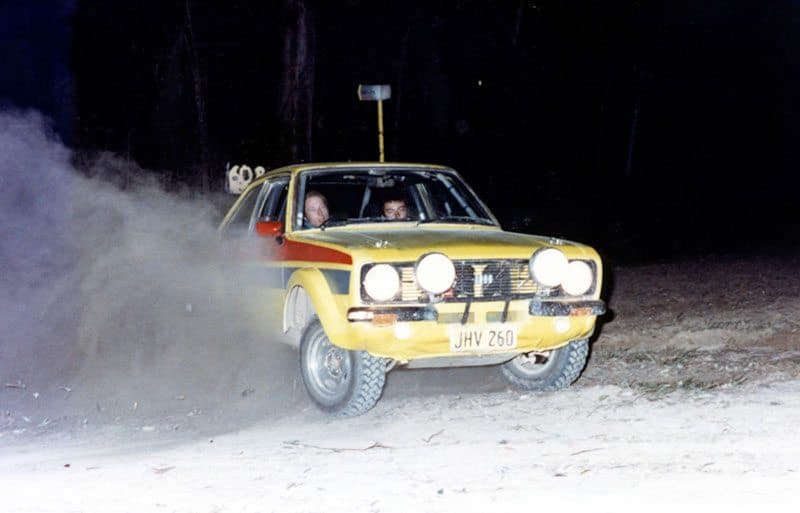 Dallas Dogger at the wheel of JHV 260 during a night rally in NSW.

JHV 260, a 2 door, 2-litre Mk2 Escort was originally bought by Port Macquarie’s John Berne in 1978 and was immediately put into service, running in the Southern Cross Rally in 1978, 1979 and 1980, as well as many other events along the east coast of Australia. However, by that stage (1980) the car was starting to get a little tired, so Berne reshelled the car using the ex-Lawton Ford shell from the car that Greg Carr drove in the 1981 Castrol Rally in Canberra. It was then sold to Canberra’s Dallas Dogger, who ran it in a number of major events including the 2GO Rally which was based on the NSW central coast. Dale Loader enjoyed a guest drive in a Newcastle event and Dogger then offered touring car legend, Kevin Bartlett, a drive of the by-now-famous Escort in the 2GO Rally as a Channel Nine and Wheels promotion. 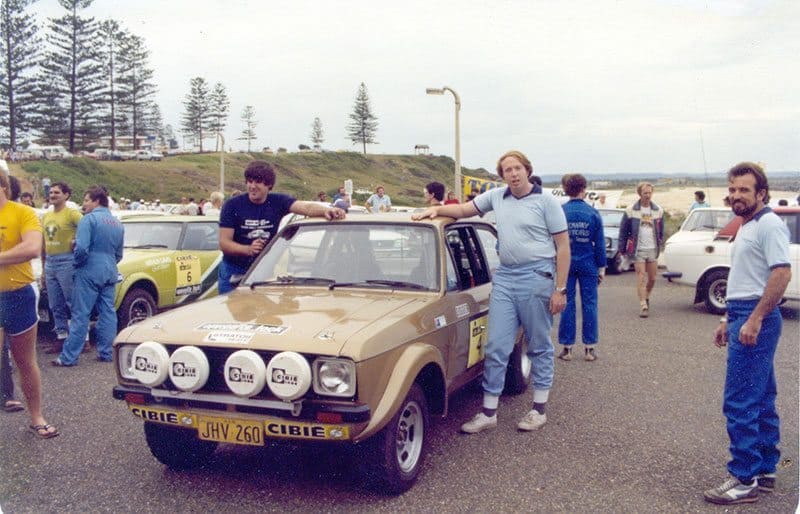 The car was refurbished by Ian Hill at Gosford Dyno Tune, but Bartlett crashed the car and damaged it quite badly on Watagan Road. Still in its damaged condition, it was sold to Bruce Garland, who reshelled it in one week and then used it in the NSW Forest Classic Rally, a round of the NSW State Championship and other state events, as well as the 1985 Canberra-based Toshiba Rallysprint in 1985.

During that period other famous names such as Jim Richards and Ross Dunkerton were seen behind the wheel, as were Ed Mulligan (1983 2GO) and Dick Johnson (1984 2GO). Naturally, in all this change of ownership the car was painted in a wide variety of colour schemes, the most famous being the ex-Garland gold.

As can be seen, the car had a very active life since it first saw forest action back in 1978, running in many events with many different drivers. But there was plenty more life in JHV 260 yet. 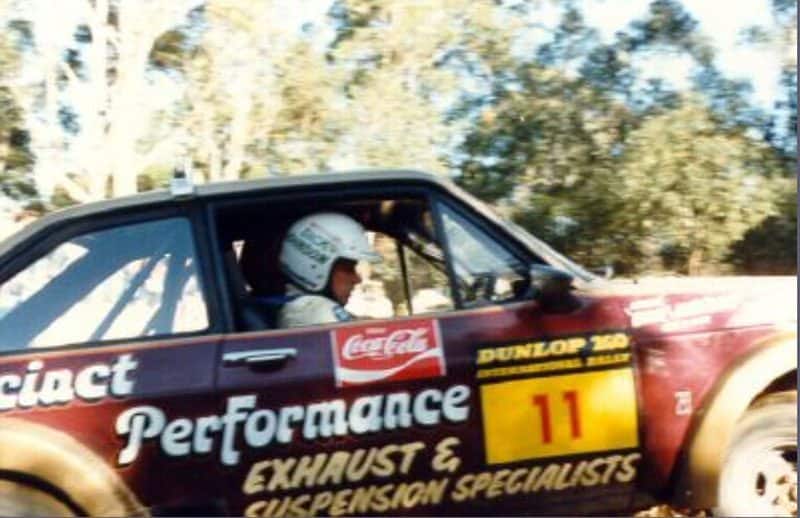 After Dick Johnson’s guest drive in the car in 1984, Bruce Garland sold the car to Frank Barker, who then passed it on to Tony McMaster, JHV 260 being shuffled around from owner to owner, Dogger driving it again in the National Capital Rally in Canberra, and Graham Vaughan running various State rounds.

With a good reputation behind it, it wasn’t long before it changed hands yet again, being bought this time by Mike Bell, who ran it in a rallysprint in Canberra with Dogger navigating, and Sarah Manual driving in the Rally Des Femmes in Canberra, with Dogger again. There was little doubt that age was catching up with this well-known Escort.

Changing ownership once again, Geoff Vowles became the custodian. Vowles then embarked on a comprehensive ground-up rebuild which extended for a number of years, before it yet again changed hands, Gerald Schofield becoming the owner this time around. Schofield reshelled the car, painted it red and ran the much travelled car for a number of years, mainly in NSW events. 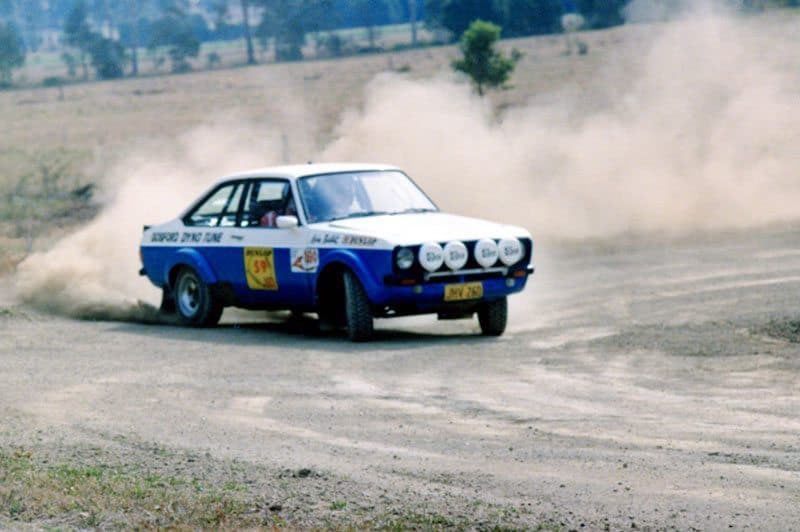 The famous Escort during a special stage of the Dunlop 2GO Rally.

Fitted with a Holbay Warrior engine, it was easily recogniseable in its red Cossack hair spray livery, a copy of the famous Roger Clark car built by the Ford Motor Company in Boreham, UK. On the move again, JHV 260 changed hands yet again with Victorian Champion Justin Dowel taking ownership and re-locating it to Victoria. In 2009, Paul Thomas bought the old damaged shell from Schofield after it had been laying around in Colin Hill’s shed for a number of years. Since taking ownership, Thomas has embarked on a 5-year rotisserie rebuild on the car. It is now arguably in its best condition since rolling out of the Ford dealer a massive 32 years ago.

Certainly this particular Mk2 Escort is one of the longest-serving Escorts around, but just how you qualify the car as the “original” is a good point. While it has the same registration plates and many of the fittings may well be the original as well, almost everything else has been replaced or reconditioned.

But in the final scheme of things, in the eyes of the owners, it’s still JHV 260, even if there is only a smattering of the original car remaining. You would not want to contemplate how much has been spent on one car, but it must be hundreds of thousands! Long may it remain in whatever form it ends up – Thomas is justifiably proud of what he’s got. 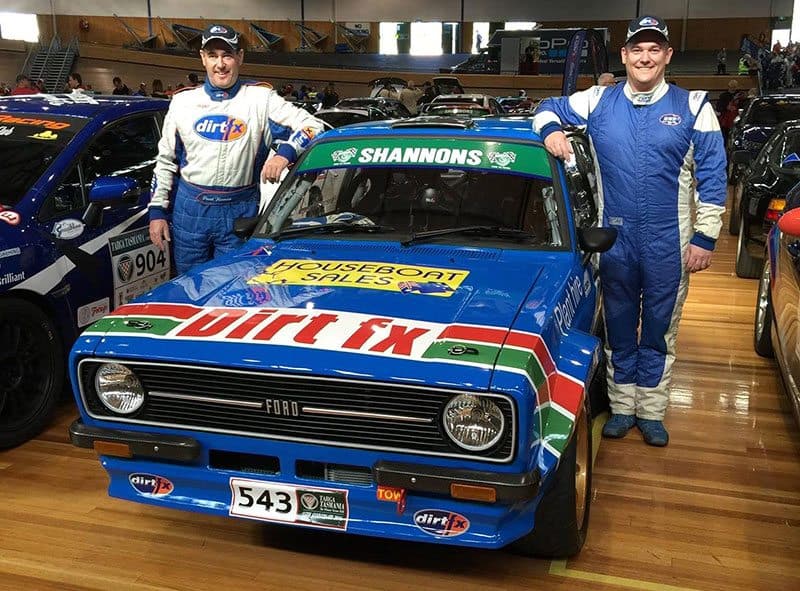 Brothers Paul and Craig Thomas debuted the rebuilt Escort at Targa Tasmania in 2016. 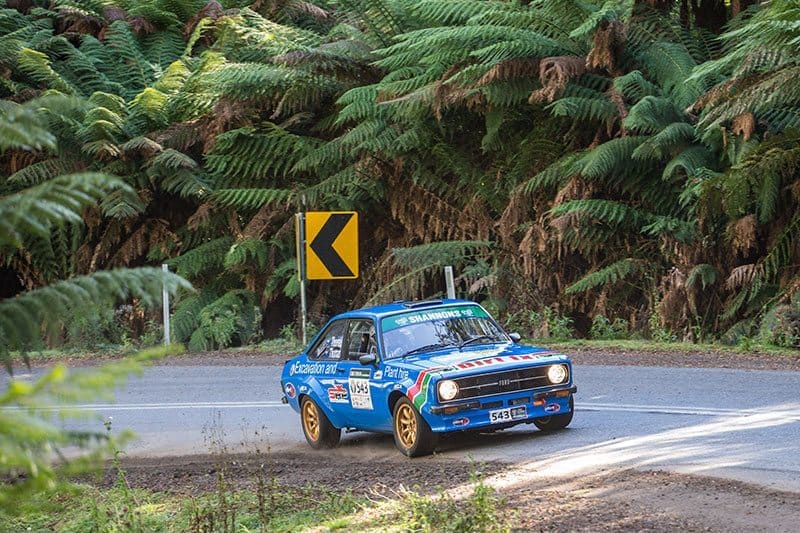 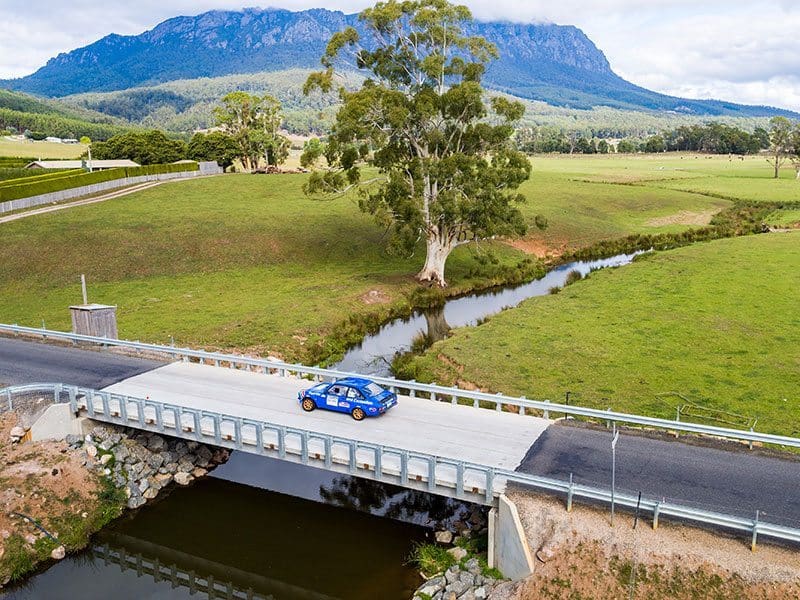