Scotsman Andrew Cowan won Australia’s famous Southern Cross Rally an incredible six times in 11 years – the last five in succession! Cowan won against some of the best rally drivers in the world, beginning with his first victory in 1969 when he drove an Austin 1800, hardly the most suitable vehicle for a car as large as the “Land Crab”. That year the rally was based at Surfers Paradise for the first and only time, and Cowan chose one of Australia’s most experienced co-drivers (or navigators as it was then) Dave Johnson. With Cowan having won the London to Sydney Marathon the previous year in a Hillman Hunter, there was huge interest in the entry of one of Scotland’s rally greats. While the 1969 win might have been successful, the following two years were not quite as rewarding.

An artist's drawing of Andrew Cowan on his way to victory in the 1968 London to Sydney Marathon.

The 1970 rally was based at Port Macquarie and Cowan was at the wheel of a British Leyland Mini Clubman. His opposition that year included internationals Brian Culcheth (England), Edgar Hermann (Kenya) and a host of top Australians, including Colin Bond, Barry Ferguson (the eventual winner), Evan Green, Stewart McLeod, Bob Watson and Bruce Hodgson. With so many top-flight entries, the ‘Cross developed into a no-holds-barred fight, however, the Scotsman’s Mini succumbed and he was forced to retire on the third night. The choice of a Mini again the following year yielded a similar result early in the event. Then came 1972. Competing for the first time for Mitsubishi, Cowan teamed up with Doug Chivas and Barry Ferguson to run a trio of Mitsubishi Galants, and his luck soon changed. 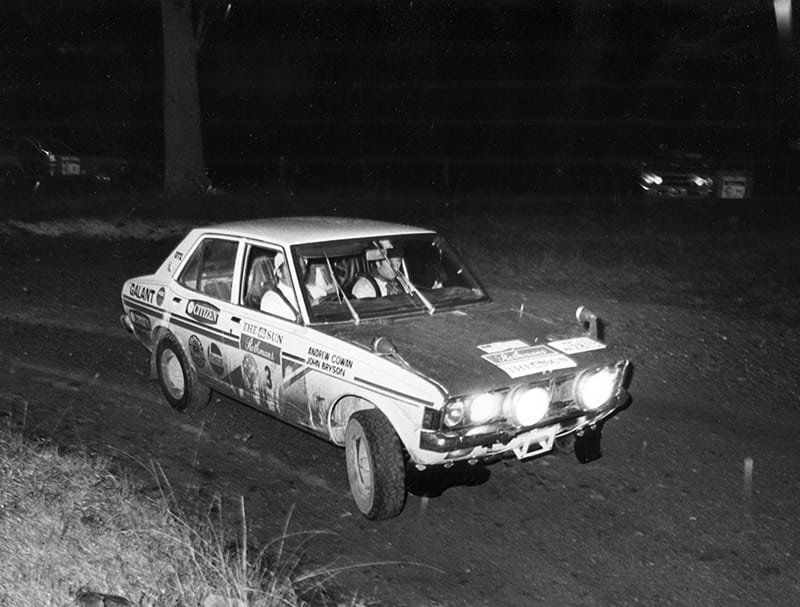 His event-long battle against the likes of Rauno Aaltonen’s Datsun 260Z and Edgar Herman’s Datsun 180B was a victory remembered fondly by rally enthusiasts. As in 1973 and 1974, Cowan was navigated by Sydney’s John Bryson. Having decided to put the days of unreliable Minis behind him, a switch to the then-new factory entered Mitsubishi Lancer GSR’s ensured that the Japanese marque took victory. In fact it was so successful that Cowan’s Lancer led home a 1-2-3-4 victory consisting of Cowan, Ferguson, Chivas and Kenyan Joghinder Sing. Driving Lancers again in 1974 and 1975, Cowan again won convincingly, in the later years navigated by Canberra’s Fred Gocentas – although each year the competition was getting stronger. In these years such world-renowned names as Aaltonen, Kallstrom, Singh and Mikkola, and a host of Australia’s best could not stop the Southern Cross “master’s” run of wins. Then, in 1976, Cowan fronted once again in a Mitsubishi Lancer GSR, albeit in a car that had not been developed past the 1975 year’s specifications. 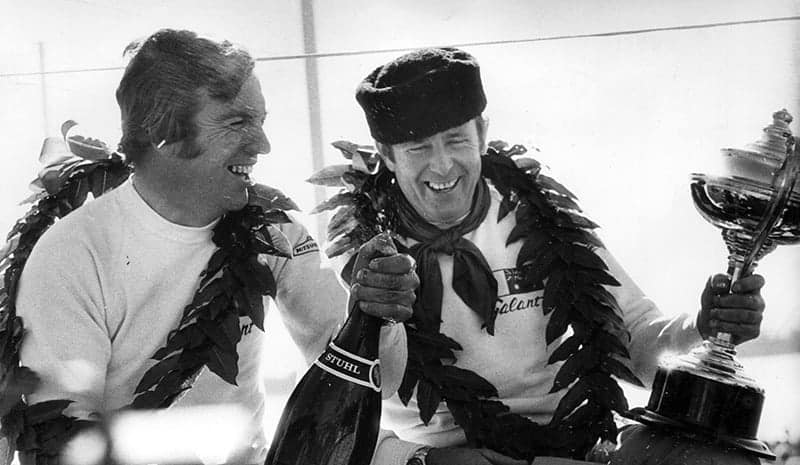 Andrew Cowan and John Bryson celebrate one of their 1972 Southern Cross Rally win in Port Macquarie.

In that year he was confronted with the strongest entry yet from local and overseas drivers. But there was a general feeling from the top entries and rally enthusiasts that perhaps somebody else should win the event. Despite that, he won yet again against such opposition as Roger Clark, Timo Makinen, Rauno Aaltonen, Harry Kallstrom, Sheka Mehta, Achim Warmbold, Kenjiro Shinozuka, Per-Inge Walfridson, Colin Bond, George Fury, Barry Ferguson, Greg Carr, Ross Dunkerton, Dean Rainsford, Doug Stewart, Evan Green and many others – literally the cream of European and Australian crews. Contemporary reports detail the great fight that George Fury and Cowan had on the last night after they had rid themselves of the opposition. 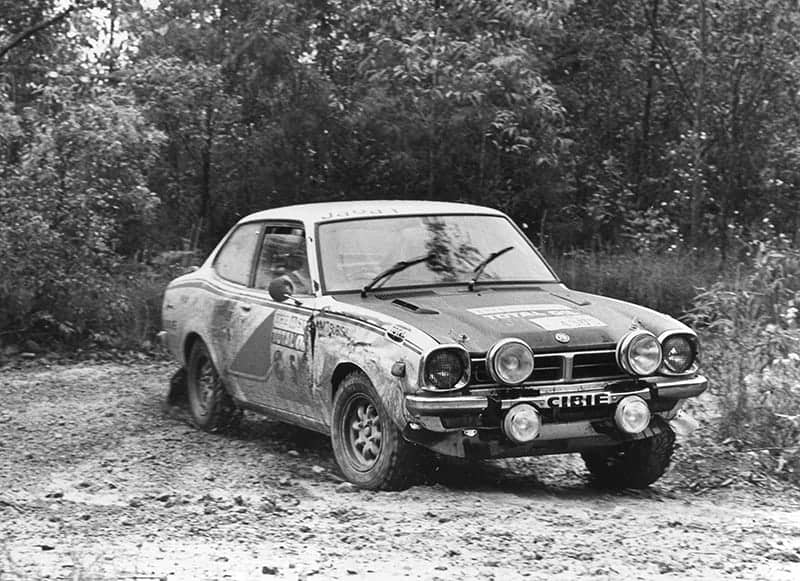 Cowan won the Southern Cross Rally four times in a row in the Mitsubishi Lancer.

Cowan’s works Lancer GSR and Fury’s factory-entered Datsun 710 streaked ahead of the field with the lead see-sawing until they were level late in the rally, and Fury was eventually forced to retire. Unquestionably, Cowan had the measure of the young Datsun driver and went on to a well-deserved victory. Despite his win in 1976 and the huge publicity that the Scottish farmer’s victory generated around the world (and in particular Japan), Mitsubishi chose not to enter the Southern Cross Rally the following year, ending Andrew Cowan’s incredible run of victories. However, that was not the last of Cowan’s starts in the ‘Cross – he teamed with Australia’s Wayne Gregson in the 1978 Southern Cross in a Volkswagen Golf GTi, but was forced to retire with a broken driveshaft. There is no doubt that the battles that he had in his brilliant career will be remembered for a long time, as will his stirring drives in the little Lancer. 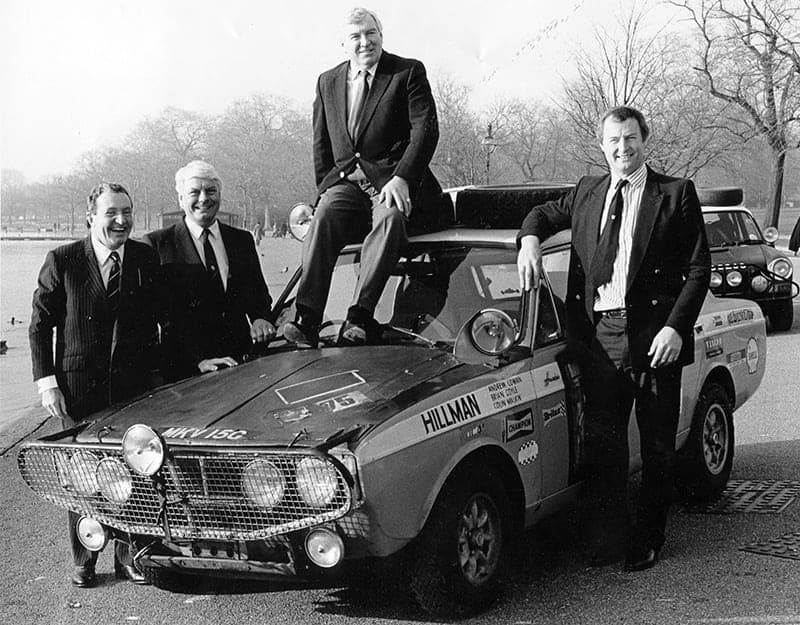 Cowan (on roof) is reunited with (L-R) Paddy Hopkirk, Roger Clark and Eric Poole before the 1993 London to Sydney Marathon rerun.