In the early 1980s, the man to catch in the Australian Rally Championship was former Ford factory driver, Greg Carr, at the wheel of an ex-works Fiat 131 Abarth – when it didn't break down. We've dug into our archives to rediscover this fantastic story on Greg Carr's 131 (originally printed in 2000), and why the car's critics were eventually proved to be correct. * * * * * 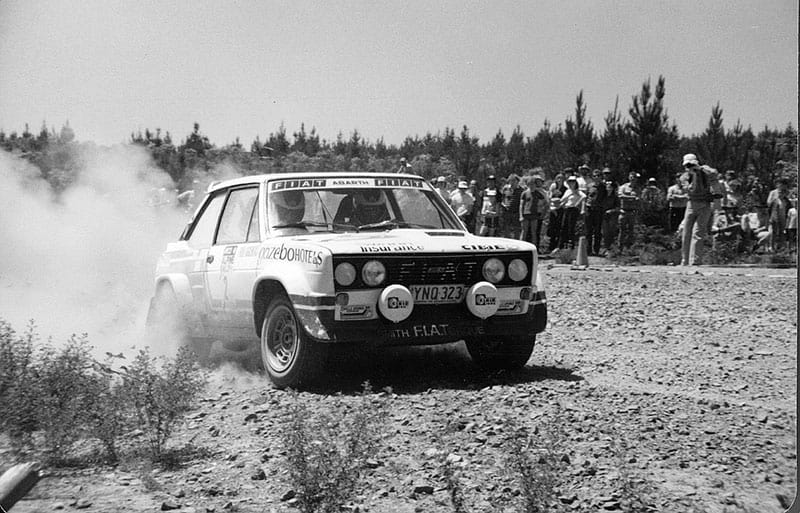 Think of a car whose name is made up of four letters and which had an enviable rallying pedigree, a successful rally-winning ability in the 80s, and you automatically think of Ford. While that description might fit Ford to a "Tee", it also fits Italian make Fiat just as well. Very rarely seen in rallying today, Fiat nevertheless carved a very respectable record for themselves in the mid to late 1970s and 1980s, winning the World Championship for Makes in 1977, 1978 and 1980. In the same period, Walter Rohrl drove a Fiat to become the 1980 World Rally Champion. Closer to home, Australian Greg Carr campaigned a 131 Abarth with some good results in the 1982, '83 and '84 Australian Rally Championship. But we'll get to that shortly. All this was at a time when Ford's BDA Escorts were the cars to beat on the world rally scene. First seen in 1975, the Fiat Abarth 131 replaced the 124 Abarth sports car which the Italian firm had rallied with a little success prior to the 131's introduction. Introduced in 1975, around the same time that Ford introduced the Mk.2 RS1800 BDA Escort, the Fiat was almost a match for Ford's pocket rocket, and gave it a real run for its money on the international rally scene. 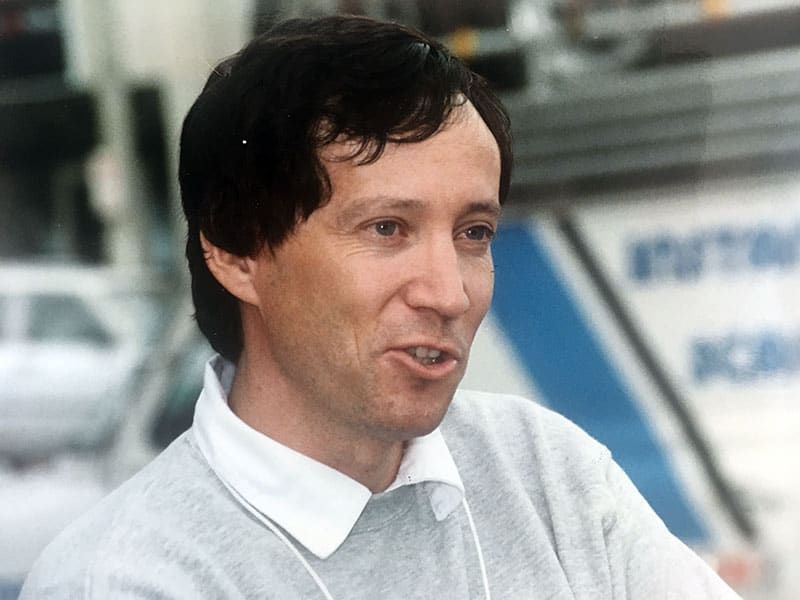 The heart of the 131 Abarth was a 1995cc four cylinder, 16 valve engine that featured a relatively long stroke, iron block and an aluminium head. While other manufacturers were persevering with carburation, the 131 had Kugelfischer mechanical fuel injection, allowing it to show a reliable 238 horsepower at 7,500rpm - potent enough for most situations and almost the equal of the Escort's 245 horsepower at the time. Transmission was by a five-speed, straight cut gearbox. Suspension was all independent featuring McPherson struts at the front, while power was transmitted to the ground through a ZF differential. The 131 Abarth was a purpose-built rally car that complied with the regulations of the period in that 400 examples had to be made. A mid-size 2-door sedan-bodied car, it sported large wheel flares and, in sponsor Alitalia's works colours, looked very aggressive. It was designed to win the World Championship (which it did) but part of its design brief was to win its home events in Italy, the tarmac and pace-noted events. To give it respectable performance, the 131 had many fibreglass panels, including wheel arch flares, bonnet and boot, as well as alumunium-skinned doors. 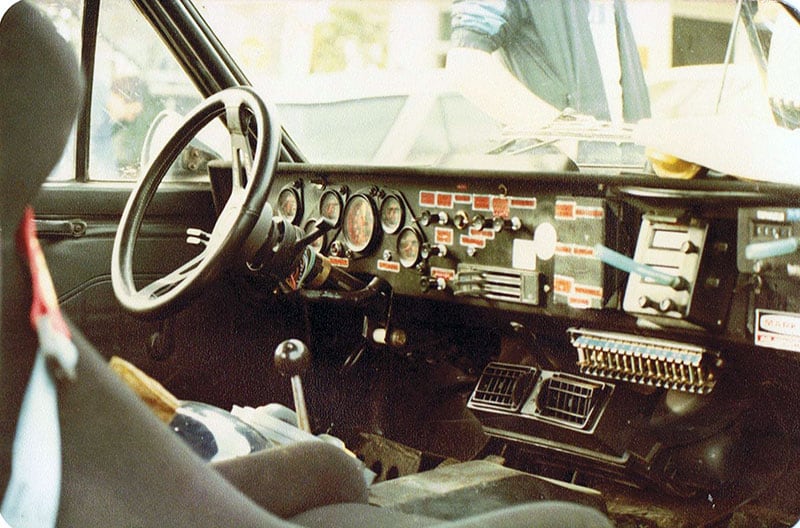 It weighed in at 2200 pounds (1000kg), depending on whether it was in tarmac or gravel road spec. Australian hero, Greg Carr, was the first (but not the only) Australian to rally a Fiat 131. Queenslander Caroline O'Shannessy also rallied a 131 in 1983 and '84 when the new Group A regulations came in, but hers was not an Abarth version. Following his successful years at the wheel of the Ford Australia Team BDA Escorts, Carr, together with close friend Caroline O'Shannessy, imported an ex-works Abarth 131 for the 1982 rally season. With support from Swann Insurance and Gazebo Hotels, Carr wheeled out the car for the Australian Championship that year against such other notable drivers such as Geoff Portman, Tony Masling, Ed Mulligan, Wayne Bell, Hugh Bell and Barry Lowe. The Fiat was a new and untried car on the Australian scene and it was expected to be less than reliable. However, Carr and navigator Fred Gocentas proved the critics wrong - the car displaying a 100% finishing record. 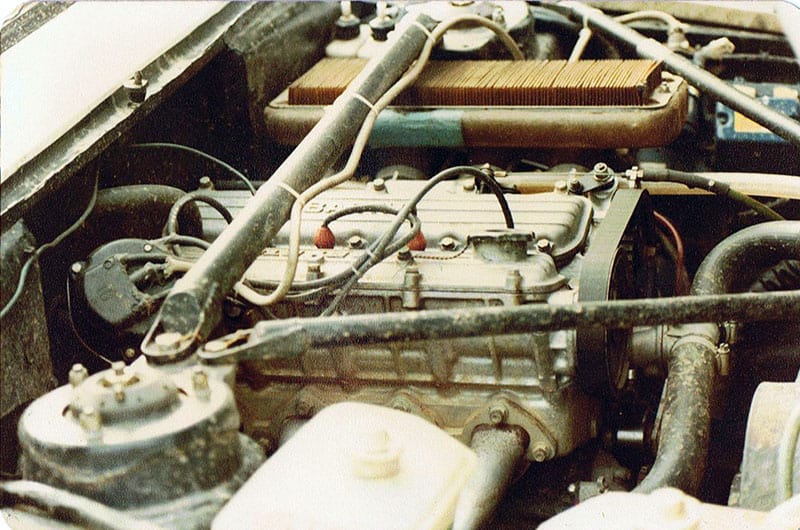 In its first year, the potent Italian car took first outright in its first ARC, the Lutwyche Rally in Queensland, albeit in controversial circumstances. They went on to score second place in the next three rounds, the Sunday Times Safari in WA, the Dunlop 2GO near Gosford, and the Commonwealth Motors Rally in Broken Hill behind the Geoff Portman/Ross Runnalls Datsun 1600 "Grunter". Their Fiat succumbed to problems in the last round, the hot and dusty Alpine Rally at Bright in NE Victoria. A fourth outright was the best they could manage, thanks to a broken rear suspension and differential, as well as persistent fuel problems. Nevertheless, the trio managed to take second outright in the 1982 ARC. Not a bad debut season for a car that was supposedly not suited to Australian conditions. If the debut season was almost trouble-free, the car's second season was less than satisfactory. The unreliability that people had been predicting finally came to pass and, despite the best efforts of the Canberra star, eighth outright was the best that he and navigator Gocentas could achieve. 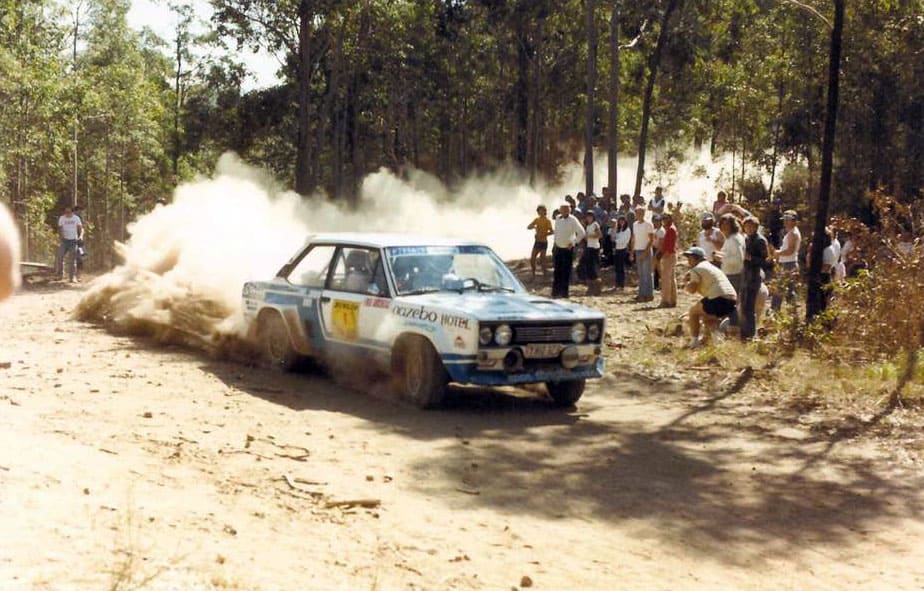 Carr started out with a resounding win in Western Australia, but then things went badly wrong in Queensland when he rolled the Fiat into instant retirement while in a leading position. It was his first roll in 13 years. The car was repaired and repainted in time for the third round of the 1983 series, the Dunlop 2GO. Carr had chosen Pirelli tyres for the Fiat, though it turned out they were totally unsuited to the wet and muddy conditions. He had a fierce battle with English star Malcolm Wilson until Wilson's BDA Escort, on loan from Mike Bell, went out on the second day, allowing Carr to take the lead. But the lead was short-lived when the Fiat's gearbox broke and he was sidelined. A four event championship meant that Carr had a big deficit to make up - the Alpine Rally in November was his last chance to score a second win in 1983. But despite leading the Alpine during the first day, the 131 Abarth suffered differential failure on the final day, and Carr and Gocentas simply ran out of late time. 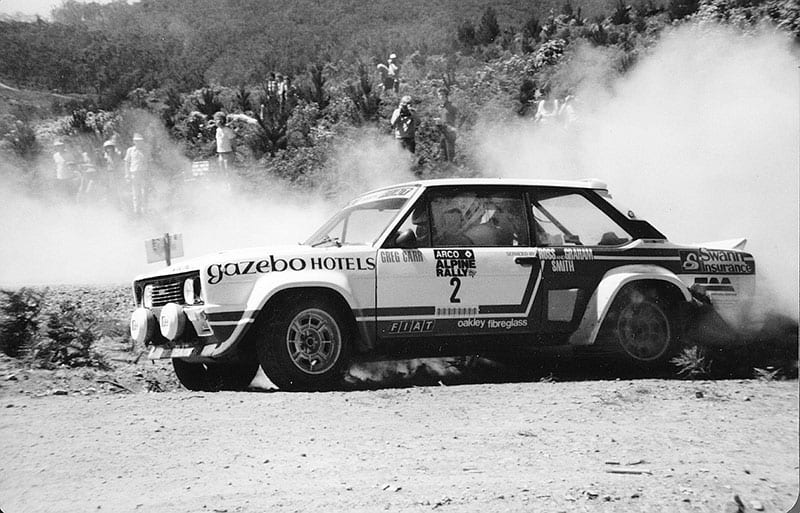 1983 had been in stark contrast to the previous year, as far as reliability was concerned. But the opposition was upping the ante, making the Fiat's rally-winning performance overseas seem like a dream. There was no doubt that Carr's Fiat 131 Abarth was the pacesetter in the 1984 Australian Rally Championship, but it unfortunately gained the name "Team Time Bomb" as a result of its litany of mechanical problems that plagued it during the year. Carr was up against some unlikely opposition, considering the Fiat's rallying pedigree, and being beaten by vehicles of the ilk of Mitsubishi Galants, Mazda RX7s, Datsun 1200s and a Holden Commodore was not something that pleased Carr. Leaving the start line on SS19 in the Canon Zodiac Rally in Victoria, Carr failed to open his ARC account when the Fiat blew its ignition pack and, by the time the fault was rectified, Carr and Gocentas were out of late time. But if they were out of luck in Round One, the pair stormed back in Round Two, the Midstate Television Rally centered around Bathurst, winning the event by almost four minutes from Ian Hill's Escort BDA. A further win in the next round, the James Hardie Rally in Queensland in May meant that Carr, Gocentas and the Fiat were still the ones to beat for the championship. 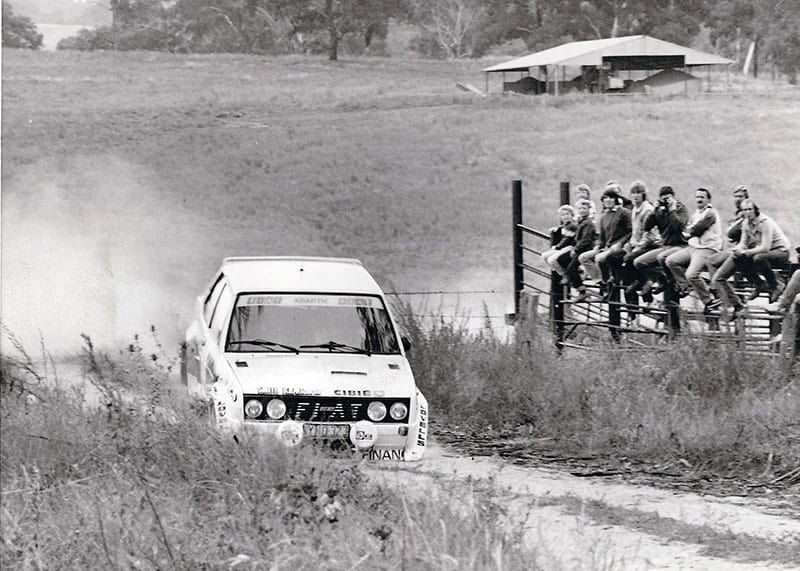 A seven and a half minute winning margin over Dinta and Kate Officer's Galant showed what the 131 was capable of, provided reliability was on its side. By the time the next round came around (the WA-based Sunday Times Safari), Ed Mulligan was leading the PRC category in his Mazda RX7 and, in a surprise to everyone, Greg Carr entered the ex-Ross Dunkerton PRC Commodore in a bid to prevent Mulligan from taking a clean sweep of the PRC points. The three-day Dunlop 2GO Rally was next on the calendar and Carr was up against Britain's Malcolm Wilson in a Triumph TR7 V8. Carr managed to amass a handy two minute lead going into the last day, but then a driveshaft broke, followed by a ball joint failure on the following stage, relegating him to 7th. However, the greatest irony of their efforts was that they were eventually excluded from the results after receiving a tow from Wayne Bell. One round of the 1984 championship remained, the rough, tough Alpine Rally which was held around Bright in Victoria. Carr again set the early pace, looking for maximum championship points. 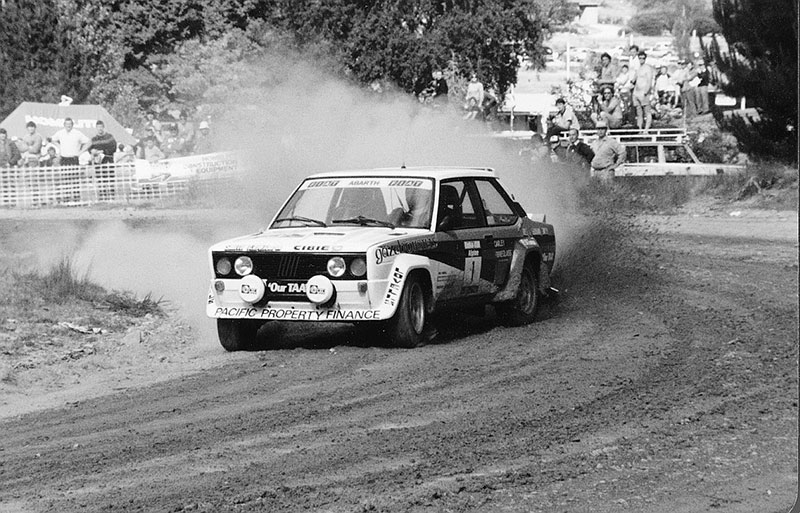 The team had entered Wayne Bell in the ex-Caroline O'Shannessy Fiat 131, running it in PRC trim as a "points-interference" car to protect Carr's valuable points. But Carr and Gocentas had more Fiat troubles, rolling the car on the first day, but they were nevertheless handily placed in second spot behind Dinta Officer at the end of the day. Wayne Bell retired the PRC car with electrical trouble, not that it mattered much because the Abarth's engine threw a rod through the side of the block on the following day's first stage in the Ovens plantation, ending any hope that Carr had of bringing the Fiat onto the winner's podium. 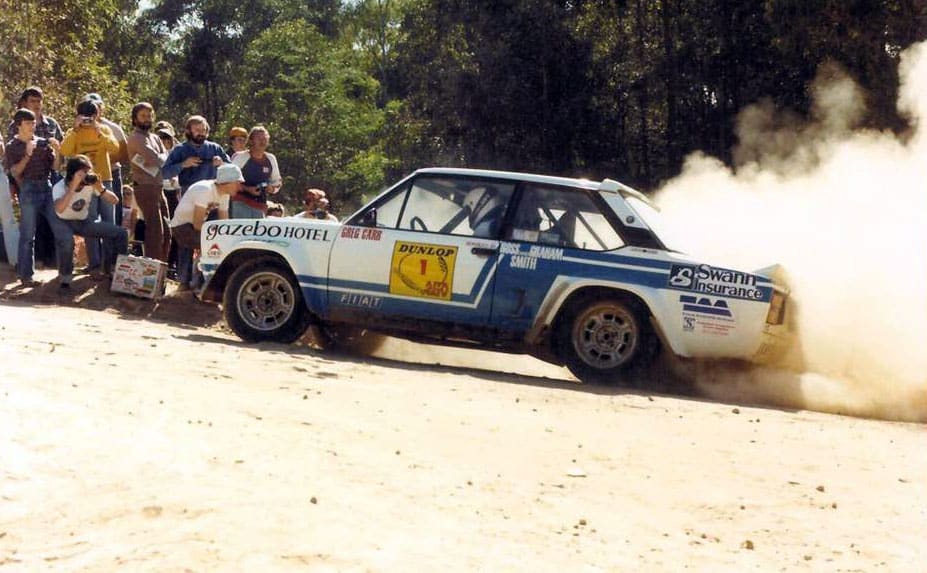 He finished third in the championship in what had been a disappointing year for the team. The 1984 season was the end of Carr's Italian connection with the promising Fiat 131Abarth. (In 1989 he had a further Italian connection with a Lancia Delta). What had offered so much promise three years previously had turned into a disappointing finale. Who knows what the Fiat could have achieved with more development and a bigger budget. 1985 may have seen a return to better results, but that was the year that Subaru introduced their 4WD RX Turbo onto the Australian rallying scene. And we all know what happened to rear-wheel drive cars after that. 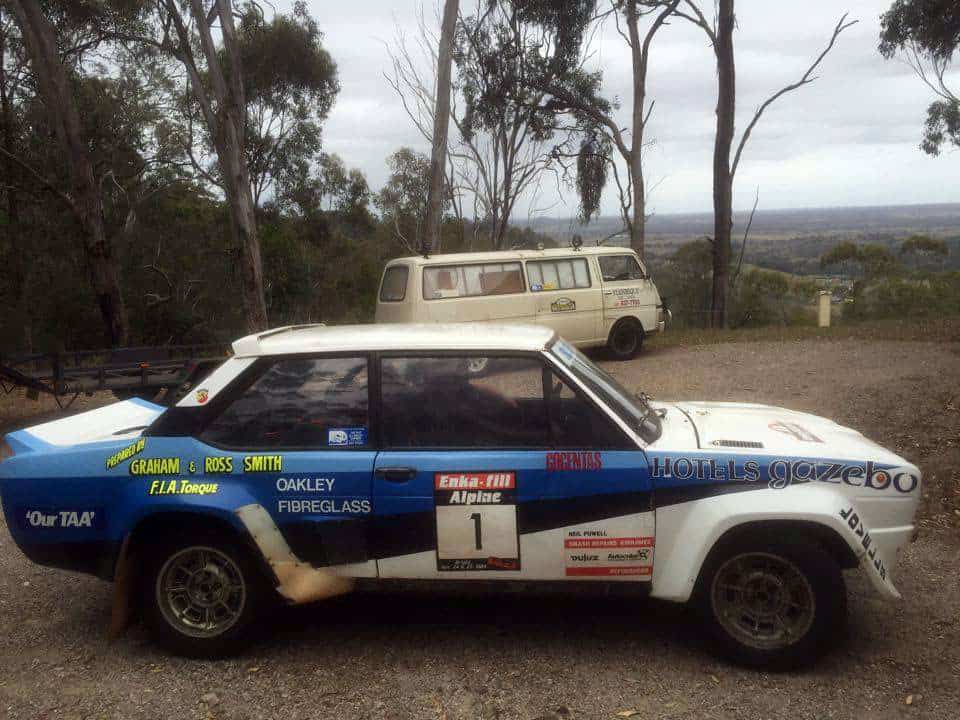 The Fiat 131 Abarth is still in original condition, as this recent photo shows. Photo: Paul Williamson