51-year old American motoring celebrity, Ken Block, made a rare return to the World Rally Championship at the 2018 Catalunya Rally, the occasion when two former world champions, Sebastien Loeb and Petter Solberg, both also made reappearances.  Martin Holmes spoke to Block about rallying, rallycross, and a possible WRC round in Los Angeles …. * * * * * Among his many other motoring activities, most famously his spectacular public stunt driving video displays, the former Subaru and now Ford rally man and businessman, who earlier had founded the DC Shoes empire, had for over 15 years enjoyed rallying in America, and in 2010 and 2011 in the WRC. At the time when the promoters of the WRC were trying to raise hopes of more North American driver involvement, Block’s arrival in rallying had been very welcome. It had been four years since Block had last competed in the WRC (six years for Petter, three for Sebastien) so the idea of an old boys’ reunion in Spain was in the mind! Block: “It was all a nice coincidence.  My Ford people wanted me to do one WRC race this year and this is the one I picked.  That's why I'm here. “It was a great opportunity to come out and race this (2017 spec) car.  I had driven it a little bit at the beginning of the year just for fun, but actually to come out on the stages was an opportunity I couldn't really pass up.” 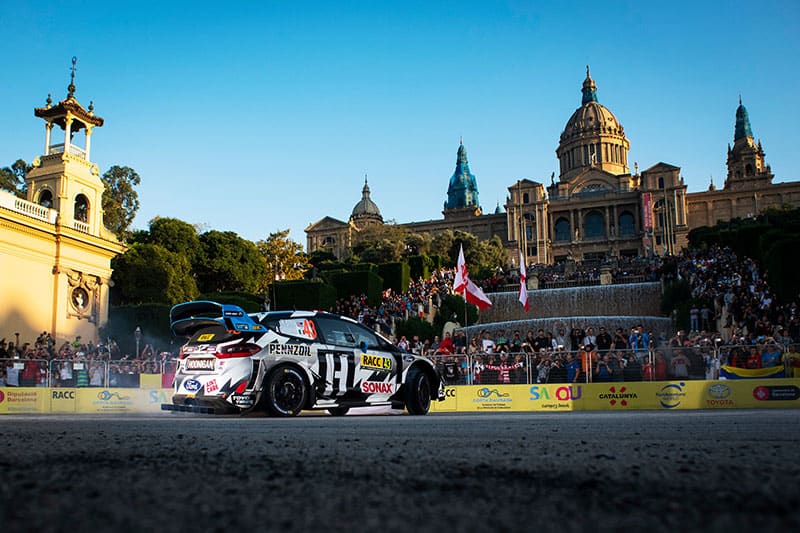 Ken Block does a donut around a hay bale during the recent Catalunya Rally. Photo: RedBull Content Pool

Much of Block’s current time is spent making spectacular videos.

“I raced in the World Rallycross Championship for the last couple of years.  This year was a kind of an off-year for me, I only did a couple of rallycross and a couple of stage rallies, and finished the project with what we call Gymkhanas.

So, coming out and doing something like this rally was really quite special.  I miss competing in the WRC and seeing all the great drivers and industry and crew that work these events.” Nowadays the craze among WRC organisers is making drivers perform spin turns round chicanes on super special stages, so the current form of rallying must be quite his style! “It’s funny with all the tarmac racing I've done the past couple of years, I've actually had much more engineering experience because of rallycross driving where you try to gain every 10th that you can. “I feel that I'm actually a better tarmac driver nowadays.  But it is very nice that they have a couple of places on this event where we get to do some donuts.  I'm looking forward to it.  This rally’s roads really are tremendous, stunningly amazing!” 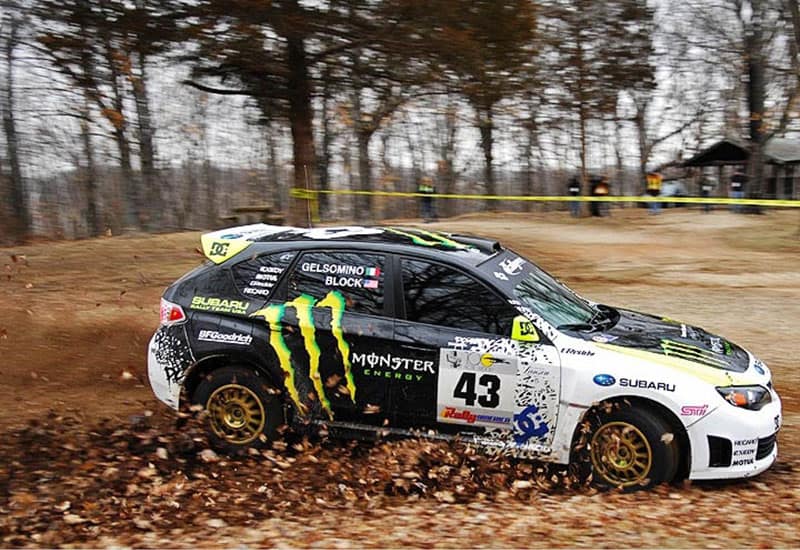 Block and co-driver Alex Gelsomino in a Subaru on the 2009 100 Acre Wood Rally. Photo: Holmes

This was, in fact, only his second rally this year. “I had a '93 Escort Cosworth in which I had one other event and got third overall on a national event.  I had attempted to do another rally, but only made around three stages when we had some mechanical issues, ended up crashing and the car burned to the ground. “So, I've only had one full rally this year and this is the first time racing a 2017 specification WRC car on a full event.” What did Ken think of these new ideas to make the World Rally Cars more powerful and go faster?

“It’s incredible, the most fun rally car I've ever driven.  I did two days of testing with it and I was blown away by how much fun it was.  Its capabilities are really high.

“After one day on tarmac I don't have the experience to drive it at the full level.  The commitment it takes on high speed stuff is really quite high.  I think I'll be okay on the tighter stuff, but once it comes to the really high speed stuff I don't think I have the commitment level needed to get the fastest stage times. “But it is incredible to drive, quite beyond what I expected.” 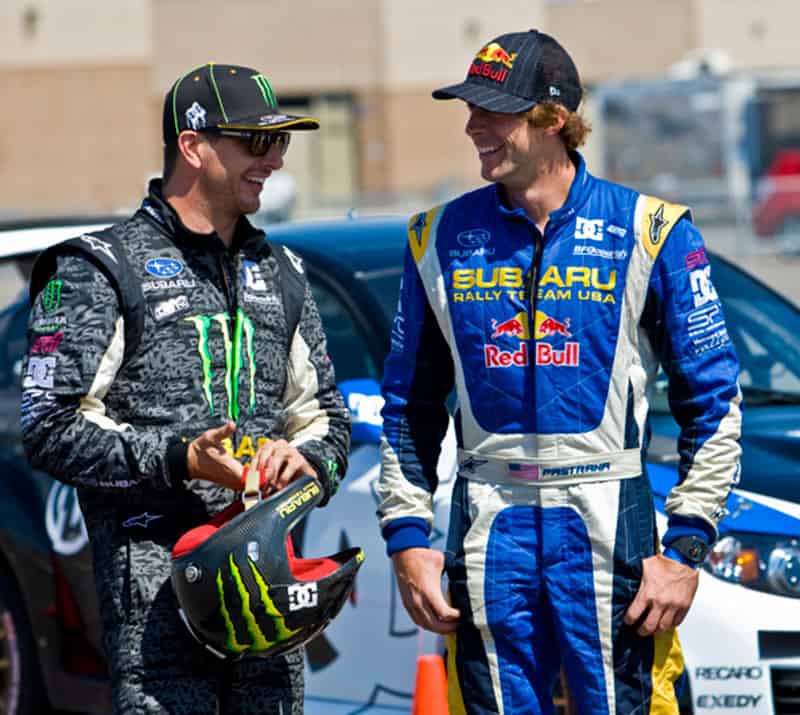 Why did he choose Catalunya for the big return?

“When I dreamed of being a rally driver as a kid I dreamed of tarmac roads that have lines on them, that you could carve around on the road, really have a lot of grip and a lot of consistency, and that's what the tarmac roads are like in Spain.

“I have enjoyed the Deutschland Rally but that was a bit more random, with all sorts of roads.  But this tarmac in Spain is more consistent and a little wider in sections.  It’s just really fun and enjoyable for me. “And as for the gravel stages, they are more technical and difficult here and I enjoy that element of it, but I'm really here for the tarmac.” What about other American drivers in the WRC?  It had been 18 years since the WRC saw John Buffum in action, 10 years since Travis Pastrana.  Who will be next? “You know, I hope there will be more.  I think Travis and I came along at an interesting time and we actually did a lot of things together. “There are now some great drivers like Tanner Foust, but he's been stuck in rallycross and hasn’t gone back to stage rallying.  So, I hope that we see more drivers come out of America because there are some very good events there.  I hope that we see some more talent come out.” 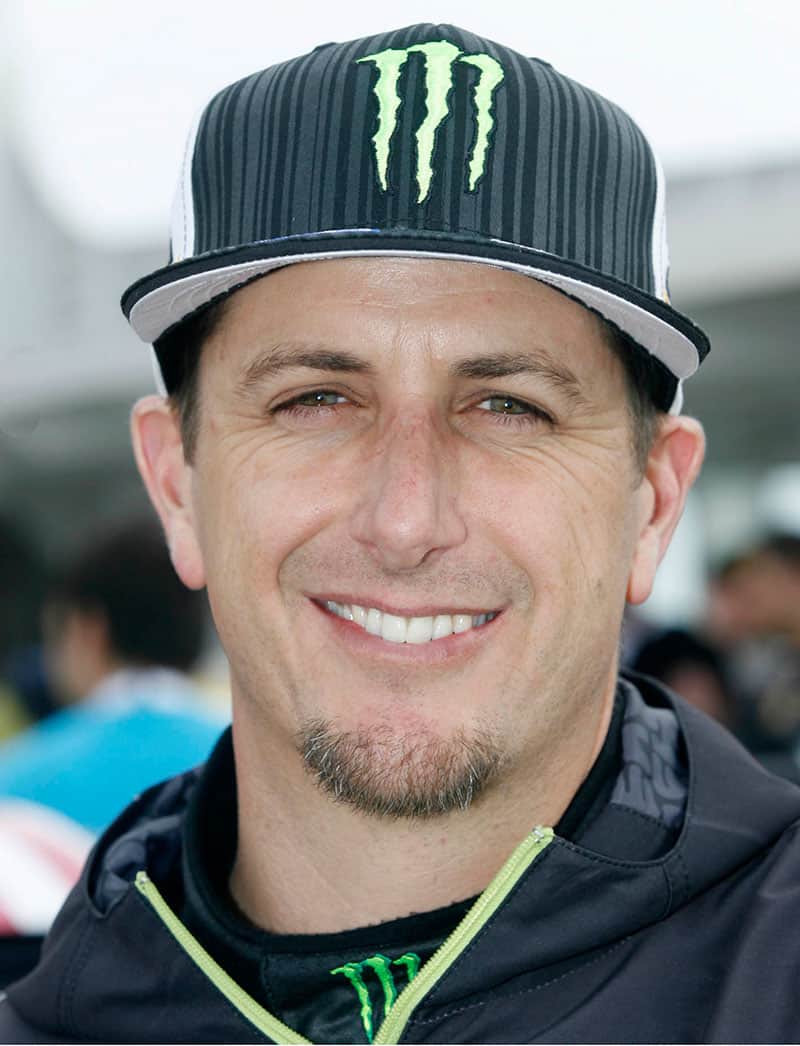 With all the hype and promotion for rallycross, global rallycross and all the other things, does Block think this is a distraction in the promotion for rallying? “Well that's a tough question.  I've never been asked that before.  I'll have to think about that one. “I generally think that rallycross and rally, they're kind of like brothers, very similar cars.  I think certain regions may be more attracted, like Americans, to rallycross, because Americans are used to sitting in one area and watching an event in one place.

“We haven't had the same popularity with stage rally in America that we've seen with other motorsports.  I think in some regions like America it is better to have something that will work than nothing at all.

“But I think in general they both work and both take talents that guys like Petter Solberg have been able to do quite well. And it’s a very specific talent for both, but the car is somewhat similar.” Does he think there is a chance of getting a WRC event in America, north of the Mexican border? “I was recently asked that question and said I thought there are some great events in America, but a lot of them are not very central to a good headquarters location that could handle the infrastructure needed for a WRC event. 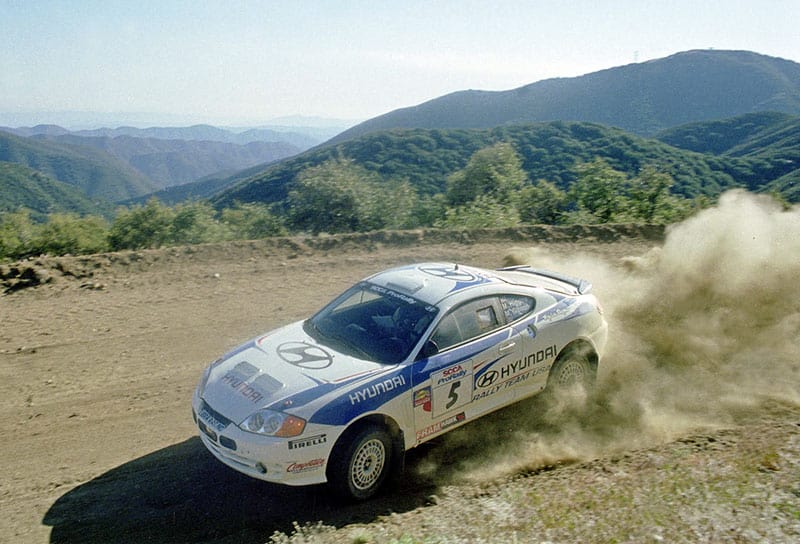 Mark Higgins (Hyundai Tiburon) on the 2002 Rim of the World Rally in the USA. Photo: Martin Holmes

“I searched around one night for roads around Los Angeles and really thought of a similar concept to what we have here in Spain.

“There are great tarmac canyon roads just outside LA and you could base everything in downtown LA, events like the old Rim of the World, based at Palmdale, California.

“I think the potential to do that is there, it just takes the organiser determination and the money.” What is Block’s own competition future? “I don't know.  I want to enjoy stage rallying.  I enjoy rallycross, I enjoy Gymkhana stuff, but my heart is still in stage rallying. “And there are certain stage rallies around the world that I would like to do, like in New Zealand and Finland.  Certain rallies that I just either haven't done or really enjoyed that I'd like to go back and do again. “I'd like to do a rally in Ireland, I haven't done one there yet.  So, there's a few around the world that I'd really like to go visit and do that in the next couple of years.” Catalunya 2018 was won outright by Loeb, Solberg finished third in the R5 category, but Block finished off the road. Business isn’t finished yet.