Slightly confused, he goes again, putting his arm around me this time and turning me through 360 degrees.

Got it. We’re in church. His church.

And his church sits at 2,200 metres in the foothills of the Andes. Once a year his church holds the most extraordinary service – the one he’s getting ready for right now.

Declining the offer of a swig of Fernet Branca, Argentina’s Italian liquor of choice, I bid Carlos a fond farewell and move on down the road. The road in question is reckoned to be one of the original routes through the mountains from Buenos Aires to Mendoza and beyond to Chile.

The FIA World Rally Championship is packed with legendary bits of road. We’ve already seen the Col de Turini on the Monte Carlo Rally; it’s Fafe in Portugal next and the summer treat comes in the shape of Ouninpohja – Finland’s finest flying festival. But when it comes to fan appeal, nothing comes close to Condor.

Running on Sunday, this is Argentina’s Power Stage and it’s well worthy of the five bonus points on offer to the fastest crew across this particular 16 kilometres. There’s no such thing as an easy ride in the WRC, but this one offers a particularly gnarly outing.

Just ask Red Bull stars Thierry Neuville and Andreas Mikkelsen. They put their matey-status to one side years ago and wound each other up for a race through El Condor. Neither won. They crashed in the same corner.

Threading World Rally Cars across the lunar-like landscape which marks out the first few kilometres remains one of the season’s most technical challenges. A stage win here carries serious kudos. Not that Carlos cares. He’s come to church for a party. Just as well, because the party has well and truly started.

There’s not an inch to spare. Stage-side, tents, caravans and cars pack out every possible space along the route. Arriving shortly before the sun drops behind the mountains, the buzz is building, the fires are warming up and the parrillas starting to sizzle with the sound and smell of beautifully cooked beef.

Somebody’s turned the lights down and the music up. It’s Tinie Tempah heaven. We bring the stars out, we bring the women and the cars and the cards out. 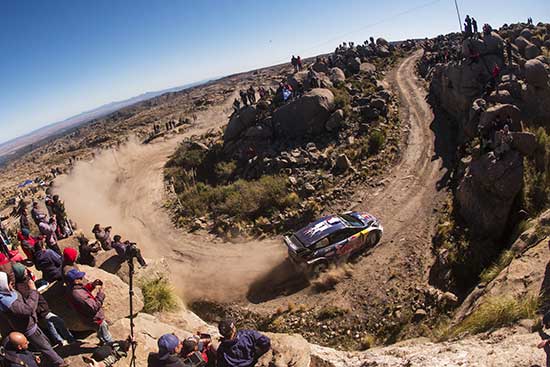 Sebastien Ogier performs in front of the Argentinan masses at El Condor. (Photo: Jaanus Ree)As thousands upon thousands of fans prepare for an all-nighter, alcohol is the poncho of choice while the slither of moon beats any head-torch for ubiquitous and cool illumination.

Talking of cool. It’s freezing. Well, not exactly, but nearly. It soon will be. Temperatures will drop below zero and stay there for much of the night, but nobody cares. Nobody cares tonight, nobody cared last night and nobody will care tomorrow night.

Carlos and his congregation have been here since Thursday. And the rally’s coming on Sunday. Naturally. This being Iglesia.

As daylight breaks, El Condor reveals her true beauty. To the east there’s Lake Buenavista and Villa Carlos Paz, home to Rally Argentina. To the west, there’s the Andes and another world.

Above, soaring, surveying and swooping there’s the bird that gives the place its name: the Condor. El Condor. There’s a majesty to this vulture which has to be seen to be believed. A three-metre wingspan offers it the run of the rocks. Just not today.

Fewer and further between, the Andean Condors are higher, more distant than usual this week. Naturally shy of World Rally Cars, today’s not really the day for them to hang on the thermals.

Especially not when the fifth round of the World Rally Championship’s about to be decided. And, after 341 kilometres of Argentina’s classic tracks, there’s just six tenths of a second separating leader Elfyn Evans’ Ford Fiesta WRC from Neuville’s Hyundai as they line up for the final 16.

Now’s not a good time to be a big bird in the sky. After a week of warming up, church is about to get noisy.