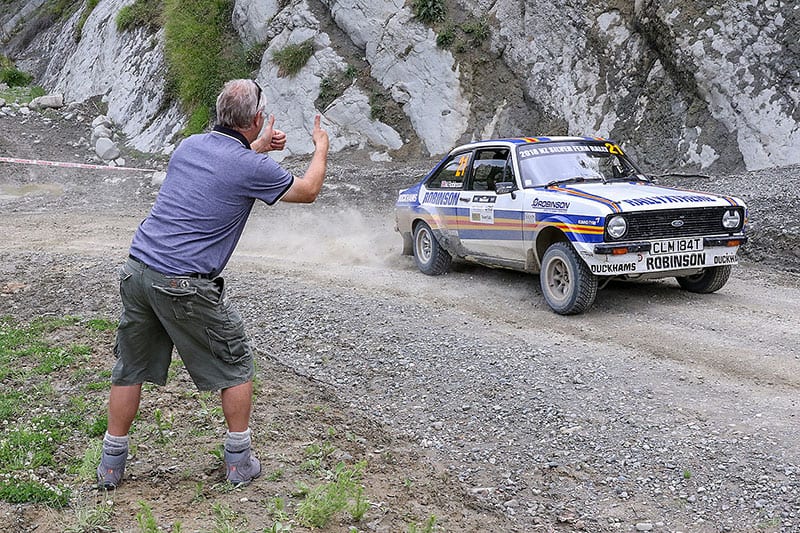 Long-time 2018 NZ Silver Fern Rally leaders Matthew Robinson and co-driver Sam Collis get the thumbs up from a spectator on Friday.

But any hope Tysoe had of further closing the gap on event leader Matthew Robinson and co-driver Sam Collis, and multiple Thursday stage winner Roger Chilman and his co-driver Max Freeman who are currently running first and second were – if not dashed, at least put on hold until tomorrow – through the final stage today, the 29.98 km Mangapoike Rd high in the misty Ureweras, south-west of Gisborne.

Before the  lunchtime service in Wairoa, Tysoe and Morris were comfortably third quickest through the stages. By the first stage after the lunch stop, the marathon 44.64km one through Ruapapa Road, they slipped to fifth, losing just over half a minute to stage winner Matthew Robinson.

Then through the final 29.98km s of Mangapoike Rd, they slipped back to ninth place, losing just over  a minute to a fired up Chilman, who won the stage from young Kiwi gun Brad McFarlane and Dad Stuart McFarlane in their repaired Porsche 911, and German-born Kiwi Peter Scharmach and his co-driver David Jasko (Ford Escort Mk 2).

Even Matthew Robinson lost time to Chilman through the stage (21 seconds) but the upshot of it was that it was Scharmach – out of the overall running but back in the event anyway –  who finished third behind day winner Chilman and day runner-up (by just 6.3 seconds) Robinson , with Tysoe back in fourth for the day and slipping further back behind the leading pair, rather than closing the gap.

Chilman again won the day, but Robinson conceded less than 10 seconds over 139km of Special Stages and heads into tomorrow’s final 178km Special Stage/295km Touring in-between with a buffer of over eight-and-a-half minutes over Chilman and almost 13 minutes over Tysoe and Morris.

Brent Taylor and his co-driver Dave Neill (Toyota GT86) continued, meanwhile, to set the pace in the Challenge class, winning four of the five stages today.

Because of issues earlier in the event however, they are running third overall, and despite taking a good two minutes out of long-time event leader Mike Goldsbury and his co-driver Dan Wallis and second-placed Dave Strong and Rob Scott, he and Neill are still over a quarter-of-an-hour in arrears with just six stages to go tomorrow.

From parc ferme in Gisborne overnight tonight, tomorrow sees a final run to the finish line in Rotorua via six stages including a 45 km marathon final through the famous Motu Road.