M-Sport World Rally Team’s Ford Fiesta RS WRCs will be sporting a new-look next week when Mikko Hirvonen and Elfyn Evans power through the high-speed forests of the 64th Neste Oil Rally Finland.

As rallying’s spiritual home, there is perhaps no batter backdrop on which to debut the Fiesta’s long-awaited facelift and the M-Sport crews will be looking to celebrate the reveal with a similarly celebratory performance.

Based on the road-going Ford Fiesta ST – Ford’s fastest-ever production Fiesta which combines contemporary style with the Blue Oval’s state-of-the-art EcoBoost technology – the new-look world rally car highlights the valued technical support which M-Sport continues to receive from the Ford Motor Company; and what better way to commemorate that support than with a successful outing on one of the FIA World Rally Championship’s (WRC) most anticipated and prestigious events?

Success on the fast-paced stages will be hard-fought. The route is blisteringly quick and precision driving and pacenote delivery is essential.

The high-speed straights are interspersed with series of jumps and a good set-up with a car that handles well can be a driver’s most treasured possession. Blind crests conceal tricky bends and split second decisions can make all the difference as crews look to position their cars correctly before take-off and landing.

The competitors must also get to grips with Michelin’s new compound – the LTX Force which will make its first competitive appearance next week.

This is an event which truly favours the brave, but make a mistake in Finland and the fast-paced gravel tracks will make you work harder than ever to win back the time.

The complex nature of this classic event means that every driver dreams of adding a Finland victory to their repertoire; something Hirvonen and co-driver Jarmo Lehtinen achieved with Ford and M-Sport in 2009.

The team’s resident Finns have an unrivalled understanding of their home event, Hirvonen contesting the fixture on 12 previous occasions and Lehtinen and impressive 16. Based in Hirvonen’s hometown of Jyväskylä, the M-Sport man will have local support on his side and he’ll be looking to translate that into a positive result in pursuit of the top positions.

In the sister new-look Fiesta, Evans also knows how sweet a Finnish victory can be having won the Finnish round of the FIA WRC Academy in his championship year. But the youngster won’t be looking to the top-step of the podium again just yet.

In what is a development year for the Welshman, he and co-driver Daniel Barritt will focus on learning all that they can. With limited knowledge of the event in four-wheel-drive machinery, the 25-year-old will be determined to make it through all 26 stages unscathed and discovering how to best apply the power and performance of his Fiesta RS WRC.

Having attended Hirvonen’s pre-event test, the youngster gained a thorough understanding of the specialist route from a Finnish master. Now, he must work to translate his findings and hone his developing skills on the stages. 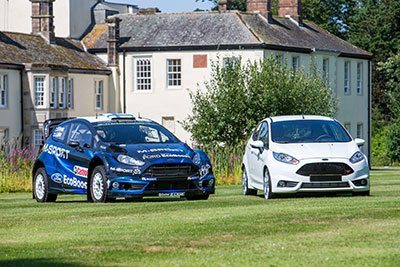 “I am really looking forward to Rally Finland – every year it is the highlight of the season for me. We’ll also have the new facelift on the competition cars for the first time next week which is very exciting. The car looks great and I’m sure the fans will agree when they see it flying through the forests.

“It’s fair to say that Finland used to be quite a specialised event but nowadays it provides more of a level playing field. There are so many onboard videos around that the Finns don’t necessarily have the advantage they used to. But we Finns are very proud of this event – of its history and its heritage – and we all want to see a Finnish driver on the top step of the podium again.

“I would love to be that Finn, but we know that this will be a close-fought rally with a lot of very tough competition. I’d like to go for the win, but if I come away with a podium I would still be very happy with the result.

“If we have a perfect rally then there’s no reason why we shouldn’t be pushing for the victory, but you have to be on the pace from the very first corner. The key is confidence. The stages are so fast and technical with lots of hidden corners over crests and you need to be fully committed throughout the entire weekend.”

“I’ve done Rally Finland a few times now but my four-wheel-drive experience is pretty limited and next week will be a completely different challenge when compared to the [Ford] Fiesta R2 I’ve been more used to on these stages. The most important thing is to be relaxed – to let the driving come naturally and see where we are.

“Knowledge and experience is important on every rally, but here it’s even more so as you have to get the crests just right. The high-speed means that there is a very fine line between setting a great time and going over the limit. But if we relax and settle into our own rally, I think we’ll be on course for another positive result.

“I don’t have a specific result in mind, but we want to see some progression in times over the course of the weekend. We’re still looking at the seconds per kilometre gap to the leaders and that’s what we’ll continue to develop next week.

“This rally is so iconic and I’m really looking forward to getting out there and attacking the stages in a world rally car. The fact that we’re debuting the facelift this weekend just makes it that little bit more special.”

“We’ve been keen to see the new-look [Ford] Fiesta RS WRC on the stages for some time now and I am happy to announce that that time has come.

“We continue to enjoy a strong working relationship with the Ford Motor Company and their technical support has been invaluable in the creation of our award-winning range of Ford Fiesta rally cars.

“This facelift strengthens the bond between Ford and M-Sport and it’s great to see the Blue Oval’s latest and highly successful production model represented in our top-specification competition cars.”

“Ford and M-Sport continue to enjoy a strong working relationship and it’s great to see this captured in the new-look Ford Fiesta RS WRC.

“The Ford Fiesta ST has received considerable success and recognition since its launch last year. It’s a pleasure to see that M-Sport’s collaboration with the Ford styling team has resulted in our latest production model being represented alongside our state-of-the-art EcoBoost technology in the FIA World Rally Championship.”

Henning Solberg and local hero Jarkko Nikara will line-up alongside M-Sport’s regulars in similar Ford Fiesta RS WRCs. The two drivers have considerable pace on gravel and could well cause an upset next week.

Also taking to the wheel of an M-Sport run Fiesta is Yuriy Protasov. The Ukrainian will be looking to extend his lead at the head of the WRC 2 category with the Ford Fiesta R5 – the car that claimed WRC 2 victory and seventh overall on its WRC debut at Rally Finland 12 months previous.