Brad Markovic’s sensational start to his 2016 Kumho Tyre Australian Rally Championship (ARC) campaign suffered a cruel blow this morning when his Subaru was destroyed by fire.

The WA driver was treated for mild facial burns at Bunbury Hospital. Co-driver Glenn Macneall was unharmed in the incident.

The pair was second overall in the opening round, the Quit Forest Rally around Busselton and Nannup, when disaster struck.

Macneall explained: “We came over a crest on stage four and I saw flames out of the corner of my eye. I told Brad to stop straight away.” 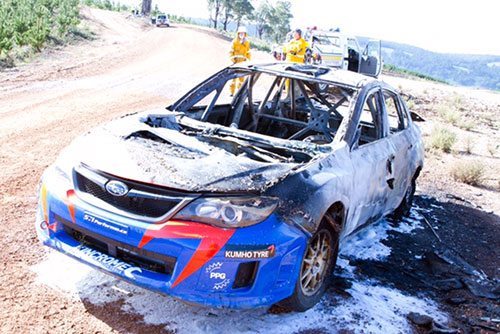 The pair flagged down the next competitors before official fire and medical crews attended the scene and the stage was stopped.

Markovic said the fire was instant and started without warning.

“We had an exhaust issue in stage three and this may have contributed to the fire. We were 16km into stage four when it happened,” he said.

Before the blaze, Markovic was outpacing many of the top ARC contenders.

He was second fastest on his second run of last night’s Busselton Super Special Stage at Barnard Park and second fastest by less than one second on stage three, the first gravel stage of the event.

“We had a pretty good stage three,” Markovic said. “We lost a little bit of time when a rock on the racing line flicked up and damaged the exhaust.”

Markovic and Macneall thanked the fire and medical teams and other competitors who assisted them and assured fans and sponsors – Auto One, Castrol, Supercharge Batteries, Kincrome Tools, R-Group International and Eagle Leads – that they would do everything in their power to be back in action for the National Capital Rally in Canberra next month.

“First, we need to find a replacement car,” Markovic said.

Maximum Motorsport Team Manager Dean Herridge said: “We will be thoroughly investigating the cause of the fire once the vehicle is released to us by the rally scrutineers.”

“It’ll be transported back to our base in Perth where we will conduct an examination to hopefully determine the cause.”

“We’re grateful that Brad and Glenn were relatively unscathed and that safety crews were able to react so quickly to this incident,” Herridge added.