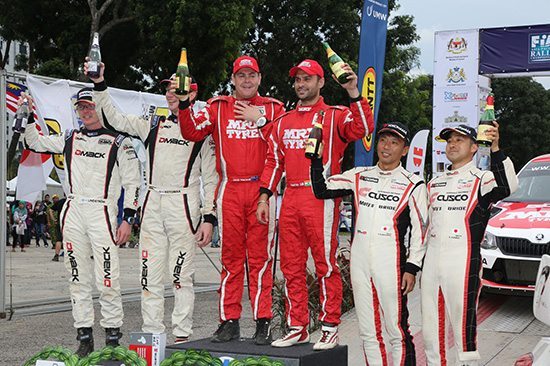 Gaurav Gill dominated the fifth round of the FIA Asia Pacific Rally Championship (APRC) held at the Malaysian Rally this weekend in his Team MRF Skoda Fabia R5, after winning the event with a commanding margin and also claiming the overall APRC drivers’ championship a round early.

Gill (India) and co-driver Glenn Macneall (Australia) built their lead from the very first stage before simply maintaining the gap after their fellow competitors suffered misfortunes over the two-day event around Kota Tinggi. The result means Gill can now be crowned the 2016 APRC drivers’ champion, the second time he has done so, and also helped Skoda claim the manufacturers championship a round early.

“Malaysia is one of the most difficult rallies of the year, it always has been, so it’s always a challenge to arrive at the end. Glenn [Macneall] has been a great co-driver and he’s been giving me tips on how to drive all these years so it’s been an amazing journey and I’m very thankful,” Gill continued.

While celebrations were enjoyed in the Team MRF Skoda camp, Jari Ketomaa and co-driver Mikko Lukka of Finland also celebrated with their Mitsubishi Mirage team after claiming the runner-up spot.

“It’s a great result, perfect actually. I am really happy but we also learnt a lot about the car setup. We know the things we need to do to get more speed so hopefully when I return to Malaysia, I can be fighting for the victory,” said Ketomaa.

Rounding out the podium in third was Japanese driver Yuya Sumiyama in a Cusco prepared Subaru, joined by co-driver Takahiro Yasui, who moved up to third following their team-mates retirement earlier in the day.

Indian driver Sanjay Takale, also in a Cusco Subaru, finished in fourth and is overwhelmed with his result at the notoriously difficult event near Johor Bahru. Takale also managed to secure first overall in the national Malaysian Rally Championship that ran alongside the international event, ahead of local rallying legend Karamjit Singh.

“I am very happy, I have never been on such a high in my entire career. We had a simply strategy and that was to ‘stay centre’. We were patient and it paid off,” explained Takale, who also added it was great to get the result on an important day for many around the world; Diwaili.

After retiring on the first day with a gearbox issue and re-joining under the rally rules for day two, German driver Fabian Kreim claimed fifth with his co-driver Frank Christian in their Team MRF Skoda Fabia R5. Despite being in his first year of gravel rallying Kreim has shown he has raw speed and has managed to claim multiple podium places, adding to the significant points margin in the manufacturers championship which Skoda has now claimed.

“It was quite good today. The roads were difficult and slippery again but we had the right tyre choice and so of course, we are happy with our results,” said Kreim.

“We were maybe a little faster today too but of course Gaurav [Gill] was not driving so fast today. The important thing is experience so that’s why we have tried to push a little harder and now we have won five stages today which is not bad for us,” Kreim continued.

It was a sad end to a promising rally for New Zealanders Mike Young and Malcolm Read in their Cusco EZY Racing Subaru Impreza. The duo ended up in a deep ditch during the first stage of the morning and despite their best efforts, could not get it unstuck and were forced to retire from a potential podium place.

“It was such a simple thing. The corner didn’t have a ditch to start with but suddenly the ditch came and we just slipped in. The car has absolutely no damage so while we’re gutted about retiring, we can be happy that the car is ready for the next round and also that our speed was good,” said Young.

The next and final round of the APRC is Rally of India, held on December 10 and 11 near Bangalore, where both Gill and Takale will get to drive in front of their friends, family and local fans.