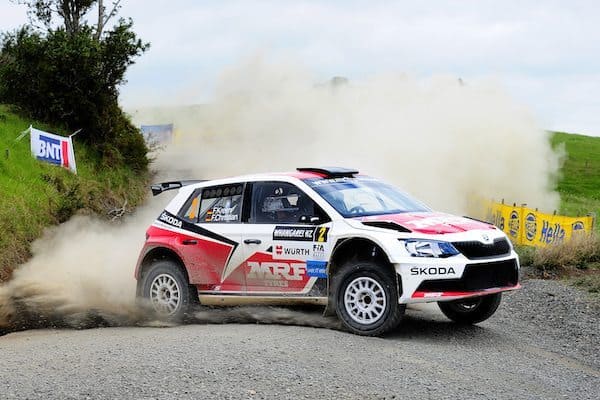 German Fabian Kreim and co-driver Frank Christian hold a 4.6 second leading margin in their MRF Tyres ŠKODA Fabia R5 car after the first full day of competition at the 2016 International Rally of Whangarei.

The opening round of six for the 2016 FIA Asia Pacific Rally Championship (APRC) the 29 April – 1 May event tested the competition field across 153.9km of Northland’s fast flowing gravel roads. Saturday’s eight special stages were held north of host city Whangarei.

His first ever rally event on gravel it is also his first visit to New Zealand’s revered roads.

“Picking up the maximum points for the day isn’t the most important thing for us as we are here to learn and to get more experience and will be happy to see the finish tomorrow. I think the difference between us and Gaurav (Gill) will make it pretty exciting (tomorrow) but also we will be playing it pretty cool,” said Kreim, runner-up of the 2015 German Rally Championship.

Third is New Zealand national Mike Young and co-driver Malcolm Read in the Cusco-prepared EZY Racing Subaru Impreza – having set fastest overall time in the final stage of the day.

Attrition cut the field significantly, India’s Sanjay Takale, Japan’s Fuyuhiko Takahashi and Australia’s Scott Pedder all retired early – although are expected to return for the Sunday.

Contesting the national section of the event, WRC Rally Argentina winner Hayden Paddon had a double-run of bad luck after the drive-line in his Hyundai i20 left him in two-wheel-drive early in the day. Returning to competition after repairs back at the Whangarei service park the earlier issue reoccurred and again thwarted Paddon’s intention of putting on a show for the rural based spectating fans.

Paddon’s understudy David Holder and co-driver Jason Farmer led the Kiwi contingent home for the day, followed by Emma Gilmour and Anthony McLoughlin.
Auckland’s Ben Hunt and co-driver Tony Rawstorn were helicopter transported for medical assessment after rolling their Subaru WRX STI in the sixth test. Both have since been cleared with the car capable for returning to action tomorrow. Hunt is evaluating his currently leading New Zealand Rally Championship position as to whether he will contest the remaining day.

Sunday’s six special stages cover a further 120km of Northland’s flowing gravel roads to the south of Whangarei.
Two loops of three stages see the cars return to Whangarei mid-morning for a service break before the 3pm ceremonial finish at the Quayside Town Basin.